Pasadena, Calif.—Drivers in California who work for the ridesharing apps Uber and Lyft held a 25-hour strike on March 25 to protest pay cuts. Uber forced what amounted to a 25% cut on March 11, after Lyft on Dec. 1 had instituted a 12% cut. Three hundred drivers and supporters rallied at the Uber hub in Redondo Beach, while in San Francisco a crowd gathered outside a hotel where Lyft executives were meeting with prospective investors.

Drivers are independently organizing under the name Rideshare Drivers United (RSDU), which grew to more than 3,000 driver-members in the days leading up to the strike. The organizers are now consulting the membership on what demands to press for beyond reversing the pay cuts. Proposals include pay for the time and mileage spent driving toward a passenger, the ability to see the passenger’s destination in advance, group health insurance, and an independent and transparent process to challenge driver deactivations.

The California Supreme Court in April 2018 ruled that rideshare drivers were not independent contractors, but were employees covered by the state minimum wage because they did the same work as the employer—transportation. In response, Lyft and Uber have claimed they are merely technology companies. Joss Cashon, an Uber driver, answered at the Redondo Beach rally: “We can’t be independent contractors when we don’t negotiate our pay.”

The state still has not yet enforced the Supreme Court ruling against the apps, and a March 29 meeting between driver-representatives of RSDU and Governor Gavin Newsom so far hasn’t changed that.

Members in Los Angeles are pushing for the same $17.22 minimum wage New York City drivers won through a series of strikes last year. With downtime and expenses unpaid, drivers actually earn less than that.

Both companies claim value in the billions in public stock offerings even as they have run up losses of as much as $1 billion per year and may never be profitable. Now they are pursuing the elusive holy grail of the self-driving sedan. A completely automated fleet would then mean that surplus labor would have to be extracted from a much smaller pool of workers who produce and maintain that fleet. 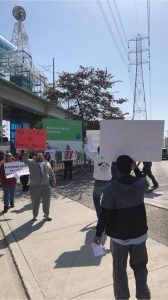 It isn’t only Uber and Lyft drivers’ jobs that investment capital is excited to squeeze harder and eventually eliminate. A five-year fall in mass transit usage has been accelerated in no small part by the advent of ridesharing apps. If that trend continues, jobs driving public transit buses and even school buses, both of which I have driven as well as for Lyft, could be in danger.

Rideshare companies claim they move passengers the “last mile” between a transit line and their doorway, but a University of Kentucky study showed that the apps remove more transit passengers than they add, as ride sharing replaces walking, biking, or a bus connection. Some municipalities have openly scrapped their local bus system in order to replace it with subsidized Lyft rides within city limits.

Often, parents of minor schoolchildren illegally send them alone in a rideshare instead of in a school bus, the vehicle designed and driver qualified for keeping them safe. In an obvious attack on transit systems, Uber rolled out a reduced fare for passengers as drivers run “jitney”—in taxi parlance, a straight line down a main thoroughfare, making pickups and drop-offs along the way. In other words, a tiny transit bus.

Traffic congestion in New York City has reached the point where voters will weigh in on capping the number of drivers Uber and Lyft can allow in Manhattan. The practice of deadheading—moving while empty—exacerbates urban congestion. Uber/Lyft drivers who want to earn more than $5-10 per hour have to drive back to where they can expect frequent calls. In this way, the rideshare industry puts excessive burdens on air quality and the effort to reduce the emission of greenhouse gases.

Like other threats against life on Earth, human degradation caused by subsistence wage labor is just another “externality” off the balance sheets of capital. Sinakhone Keodara, quoted by NBC, said he sleeps in the car he rents directly from Lyft. “I don’t make enough to get out of my situation… I’m drowning in this gig economy.”

That economy, itself a usurper of traditional employment, seems intent on its own withering away via automation. Meanwhile, workers who move to restore labor safeguards and living wages to their “gigs” have never conceded a future possibility of dignified and freely associated work.

← Letter from Mexico: Remembering Emiliano Zapata
Essay: What is socialism? Socialism, labor, and the Black dimension →
This work is licensed under a Creative Commons Attribution-ShareAlike 4.0 International License