In a world of constant change and struggle, it is rare to know a person who has had such an impact on the history and revolutionary idealism of social change and Marxist-Humanist philosophy as Olga Domanski. She has been a pillar that has defined the foundation of News and Letters Committees for decades. 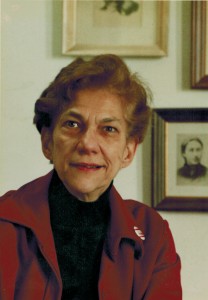 In 2002, at 78 years old, she wrote her first letter of support for a prisoner going before the parole board. She had never met this man, but the power of his writing and art she felt revealed “a man with exceptional intellect and a great feeling for humanity in all the colors, ages, nationalities and genders it includes.”

When someone receives that type of endorsement from someone who is so well-respected, it is impossible not to feel humbled and honored that a person so dedicated to the cause of justice and equality would take the time to write such a supportive letter.

Such were Olga’s instincts and beliefs. Such was her understanding of justice. Such was her recognition of the potential of every human being and her ability to exemplify and display the humanity of Marxist-Humanism in her life.

OLGA—THE BEST OF NEWS AND LETTERS

Olga represented the best of what News and Letters Committees members and supporters should strive to achieve: furthering the cause of Marxist-Humanism in every aspect of our human society, and doing our part to infuse youth with the revolutionary spirit and energy which she shared with us for over 60 years.

To be able to recognize that a person’s intellect—though that person may be incarcerated—should be respected and allowed to flourish is one of those things that Olga championed throughout her life.

For one prisoner, and his family, her kindness, understanding and humbling magnanimity will be another of her legacies that will not be forgotten.

The true measure of a human being is not what they are required to do to enhance the common good, but the sacrifices that they are willing to make that are above and beyond what is expected of them.

We have a noble legacy. One of the most important aspects of that tradition is to make sure that we do everything possible to share that legacy with youth, so that News and Letters Committees continues to be at the forefront of revolutionary thought and the champion of Marxist-Humanism in this century and beyond.