Editor’s note: Below we translate excerpts from Praxis en America Latina of an activist’s participation in a forum in Mexico on “Multiple violence and dispossession: women in defense of the territory.”

Economic and political strategies are declaring war on Indigenous peoples and their territories. These are the last gasps [of survival and resistance] that exist in the world. They are in the hands of the indigenous peoples, and there is a war to try and push us out.

LAND DWELLERS LEFT OUT OF DECISION 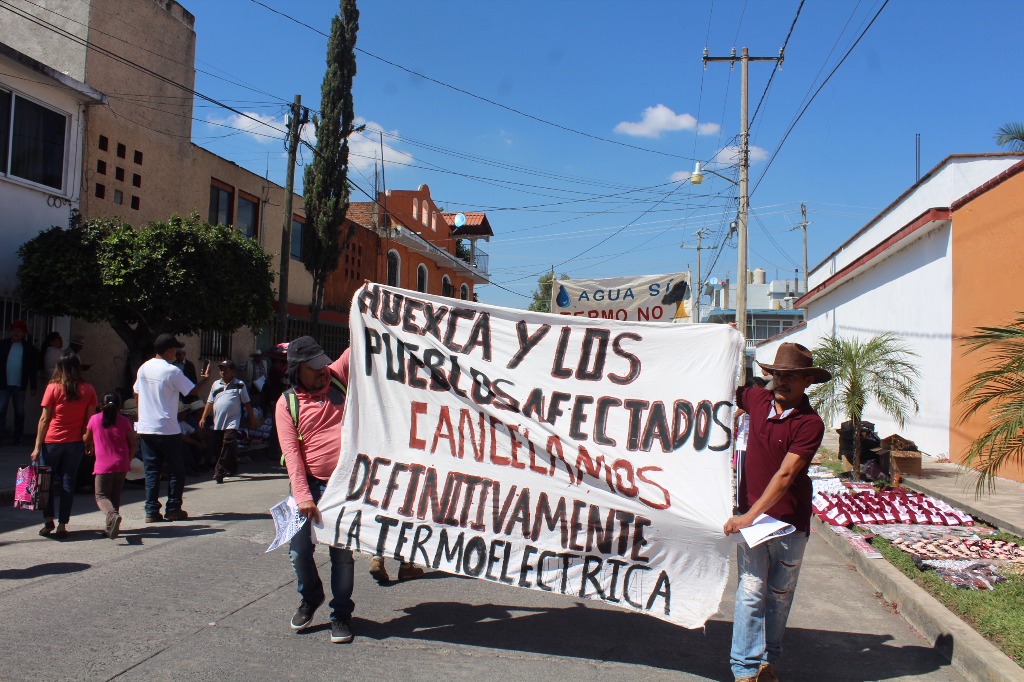 Protest against the Huexca thermoelectric plant.

In Morelos, Puebla and Tlaxcala, the Integral Morelos Project [construction of a thermoelectric plant] will affect approximately 82 communities. However, the people who live in these communities have been the last ones to be informed that there was going to be a project in their territory.

It is usually thought that the struggle arose from the men organizing. But in Morelos, and in many communities, the struggle was carried a long way by women. In Huexca, it was women who decided to stop the construction of the thermoelectric plant. They said: “Tomorrow we will be here at 5:00 AM and close that thermoelectric plant construction.” Today marks seven years since that first action. The construction was stopped until the repression came.

Why did we decide to put our bodies in resistance? We are the ones that have contact with life itself, with nature, with the land, the health of the family and our community. That is why we defend what belongs to everyone. This is the strength of the women who decided to lead the struggle.

In Amilcingo [an Indigenous community], women’s resistance is crucial. We have the same voice and vote in the assembly as men. Young people also participate. The assembly is an important step of strength for the people and for women, because in the assembly the voice of the woman is heard.

We women are giving another direction to this centuries old struggle. The fact that women participate by attending and deciding actions together gives a new direction and meaning to the struggles.

We need to heal, and women’s participation is helping. We continue in the fight because we will not allow the death of our assassinated comrade, Samir Flores, to be in vain. More than ever we are going to defend our territory. This war is for life itself, and that’s why we all have to find a way to find each other and fight together. In many ways the women are leading and pushing the struggle forward.

← Voices from the Inside Out: What is freedom?
Amazon workers organize cross-border solidarity →
This work is licensed under a Creative Commons Attribution-ShareAlike 4.0 International License