Oakland, Calif.—For Mothers’ Day 2018, on May 10, Essie Justice Group; Young Women’s Freedom Center; Transgender, Gender-variant, Intersex Justice Project (TGIJP); and other mostly Black women demonstrated in front of the Oakland courthouse demanding an end to money bail. We celebrated the victory of raising the money to wrestle a Black woman out of the clutches of Alameda County Jail just a few days ago. Below are excerpts from some of those who spoke: 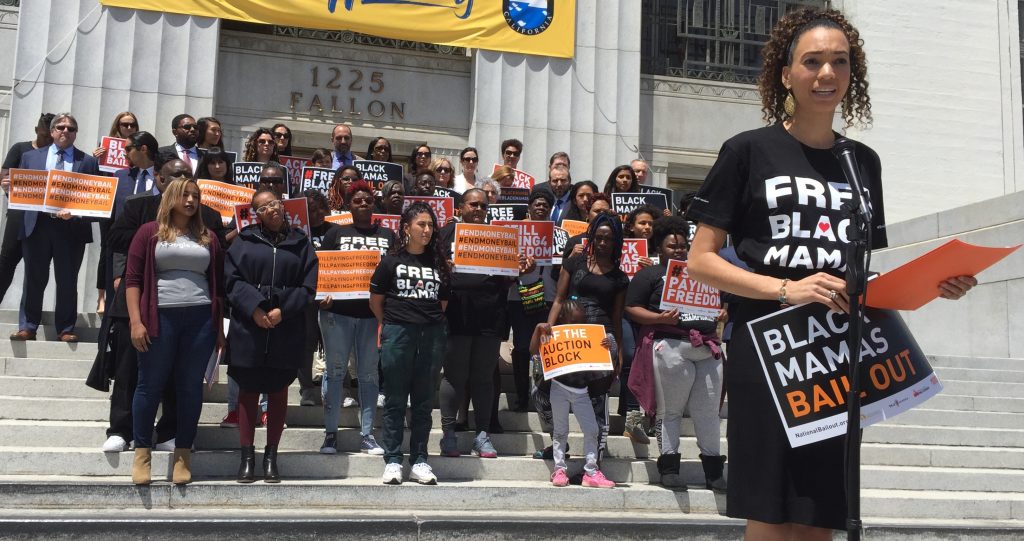 Gina Clayton of Essie Justice speaking at the Mothers’ Day rally in Oakland, Calif., on May 10, 2018. Photo: Urszula Wislanka for News & letters.

Gina Clayton, Executive Director of Essie Justice Group: We are here because at this very moment, thousands of people sit behind bars, away from their families, their jobs, the embrace of the people who love them, simply because they can’t afford to pay their bail. There are 46,000 people across California who are right now incarcerated pre-trial. We are one of two countries in the world that has a pretrial justice system that cares more about profits than it cares about people.

An exploitative $2 billion bail bonds industry profits off of taking people’s freedom. This is an industry that learned the ins and outs of bounty hunting from slave catching; of controlling Black people’s movements from slavery. And you know who has been footing the bill? Black women.

Seventy-five percent of women in local jails are women of color. And for Transgender women, particularly

Speaker at the Mothers Day Rally in Oakland, California, against money bail on May 10, 2018. Photo: Urszula Wislanka for News & Letters.

Black Transgender women, not making bail is a matter of life or death.

Nearly one in two Black women today has a family member who is incarcerated. Because in places like California, where the average bail amount is $50,000, it is women who are putting up our homes for collateral, handing over car titles, scraping together resources and going into debt, to buy our loved ones’ freedom.

From training in community, to visits with elected officials, to sponsoring legislation, to convening grassroots groups across the state, to bailing out Black women—the women of Essie Justice Group have been hard at work leading the fight to #endmoneybail.

A member of Essie Justice spoke about her life: With my husband behind bars, the burden is all on me to run the household, raise our children, earn an income while trying to educate myself. I know that I am not alone. Women make up 80% of family members primarily responsible for covering court costs. On average they incur $13,000 in fees and fines from the court system. The California median bail is five times the national average. Those who cannot afford to pay bail have to wait. Or they take loans with high interest rates. The predatory bail system uses the love Black women have for their children to persuade women to put up their homes that they have had in their families for generations, auction off their cars and sell any of their valuable possessions they may have had in their families. If my husband had been offered bail, unfortunately we would have had to tell him, “we ain’t got it.”

Another Essie Justice member said: I am here today to call for an end to the money bail system that harms us all. There are hundreds of other Black women in jail today we want to bail out. The bail system is a form of hostage-taking.

My arrest was a nightmare. The first thing on my mind were my children. Bail was not an option, realistically. So I sat in jail for 10½ months before my case was tried and I was released. I lost contact with my children for months. And then I lost hope. Eighty percent of women in jail are mothers. 80%! I was one of them. And so was the woman we bailed out last Friday.

Women lose custody of their children while they can’t make bail. Families are torn apart because they can’t bail out. The system of white supremacy is devastating Black communities everywhere. It is time to end it!

Judy, mother of the woman bailed out by Essie Justice on May 4, said: I am a Black mom. My daughter was incarcerated for a crime she did not commit. They showed a picture of the person who did commit it, and he was very tall. She is 5’ 2”. The bail system makes no sense. $50,000 is a lot of money. How many of you have $50,000 in your pocket right now? I got a call from Essie Justice. They said they were going to stay until she was released. I’ve never heard of anything like that! But then I heard she was going to be released! It made it real.

Jasmine from Young Women’s Freedom Center said: In Black families, women are the foundation. When daddy is not there, you depend on your mom. And daddy is usually not there. So what happens when mom is not there either? I’ve been in jail a couple of times. I could not afford bail, which meant I could not be with my kids. We sit in jail for no reason but the color of our skin.

A representative from TGIJP said: I am here today to talk about saving Black mamas, and especially Trans Black mamas. When legislation criminalizes sex work, which is real work, when cities turn to homeless sweeps, like they do in San Francisco, rather than increase social safety nets to address root causes of homelessness, when survivors of domestic violence are treated as criminals and put into cages, many, many Black mamas, many, many Black women, many Trans Black women end up in cages.

Bail reform is life and death for Trans people, for gender non-conforming people. In order to decrease our folks’ risk of facing physical violence, sexual assault or solitary confinement, which is deemed to be for their own “protection,” we need to be able to get our folks out. We need to end money bail!