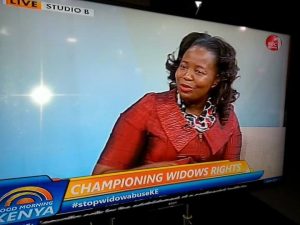 The Widows’ Club in rural Western Kenya is a group of women fighting “widow cleansing.” This tradition is now illegal, but there is still enormous social pressure on every new widow to pay and cook for a “cleanser” who comes to her home to rape her repeatedly, often infecting her with HIV. The group’s founder, Roseline Orwa, holds therapy sessions for widows as well as sessions to re-educate “cleansers.” She states, “I think it’s the beginning of a long feminist movement, particularly for the widows of Kenya. I’m a childless widow, so it was so easy for me to come into this space and say, ‘I think this is about abusing women, I think this is about rape, I think this is about a patriarchal society. I think this culture can be transformed and changed.’”

Margarette May Macaulay embraces Suhelen Cuevas, one of the victims of the 2006 San Salvador Atenco conflict, at the Inter-American Court of Human Rights. Photo: Juan Carlos.

In 2006 the governor of Mexico State, Enrique Peña Nieto, ordered a police crackdown on human rights demonstrations in the town of San Salvador Atenco. About 40 women demonstrators and bystanders were arrested, raped and tortured by police, then denied medical attention. Eleven of the women have taken their case to the Inter-American Court of Human Rights, demanding that government officials be held accountable for encouraging the abuses—including Peña Nieto, now President of Mexico. The women previously rejected reparations from the Mexican Supreme Court, which had allowed those responsible for the torture—police, jailers, and government officials—to walk away with impunity. The court is expected to issue a ruling next year.

In El Salvador, where all abortion is illegal, Teodora Vasquez has served ten years of a 30-year sentence for aggravated murder following a stillbirth. On Dec. 13, at the Second Court of Appeal, two expert witnesses testified the stillbirth was from natural causes, but the three-judge panel reaffirmed the original decision, and Vasquez was returned to prison. Vasquez had joined a group of 17 women imprisoned for stillbirths and miscarriages called “Las 17.” With the help of the local activist organization Citizen Group for the Decriminalization of Abortion, they requested and received government pardons except for Vasquez and another woman. Citizen Group states there are 28 other women in the same situation and two more awaiting trial.

← The limitations of restorative justice
Letter from Mexico: Zapatistas and science for humanity →
This work is licensed under a Creative Commons Attribution-ShareAlike 4.0 International License