On May 28, 19 groups from Chile’s feminist movement took part in the International Day of Action for Women’s Health, demanding access to abortion, which is totally illegal there. In July, the Feminist Propaganda Brigade held a march demanding “legal, safe, and free abortions.” Posters were pasted up in Santiago around the University of Chile, stating, “No more Prohibition, we will abort safely with misoprostol; in 2009 President Bachelet outlawed it and became rich off our bodies,” “High Schoolers Abort Too,” “We Have Aborted Since Ancestral Times,” and “Your ‘Compliment’ Rapes Me,” a statement against sexual harassment.

In August, 26 immigrant women began a hunger strike at the Berks County Residential Center in Pennsylvania in response to comments from the Department of Homeland Security (DHS) that the average length of stay in family detention is 20 days. These women and children seeking asylum have been held from 270 to 365 days. The children express suicidal intent and depression. The women are subjected to sexual assault, inadequate medical care, threats of deportation, and “room checks” every 15 minutes. In July, a federal court ordered the DHS to end family detention, but Berks continues to operate without a license.

On July 28, in Qanater Women’s Prison in Egypt, six women, including award-winning human rights lawyer Mahienour El-Massry, announced they would join fellow prisoner Basma Refaat in the hunger strike she began a week earlier because she is prohibited from seeing her children. They are demanding implementation of a court ruling allowing visitation.

On Aug. 13, over 50,000 people, mostly women, marched in Lima and eight other cities in Peru protesting violence against women and the lenient sentences given to perpetrators. Ten women are murdered per month, and 20 are victims of attempted murder. 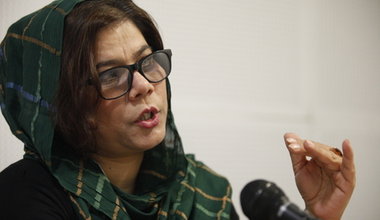 In Kunduz, Afghanistan, Radio Shaista, a feminist radio station, is back on the air after having been burned to the ground by the Taliban. It reaches 800,000 listeners in a region where 85% of the female population is illiterate and mostly confined to homes. The broadcasts educate women about their rights and address domestic violence and reproductive health. The program “Unwanted Traditions” examines centuries old customs including forced marriages of underage girls.