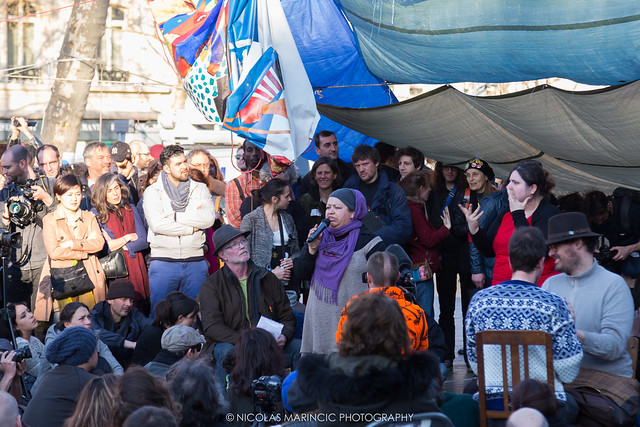 The attempt by Socialist President Francois Hollande to ram through labor law changes has been met by nationwide strikes and social mobilizations. This includes Nuit Debout (“Up All Night”), the occupation of Paris’s Place de la Republique which began following the huge demonstrations in May when thousands simply decided not to return home but to stay up all night discussing alternative ways of living.
SOCIALIST IN NAME ONLY
Hollande says he wants to create jobs in an economy with 10% unemployment. The proposed laws would allow employers to negotiate away the 35-hour work week, with either more or less hours up to 46; give them greater leeway to reduce wages; make layoffs easier; and give firms an opening to negotiate holidays and maternity leave. 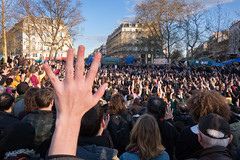 Resistance is heated. On June 23, hundreds of thousands were prepared to defy Hollande’s ban on marching, before a settlement was negotiated between government and union officials. This follows weeks of strikes in rail and public transit, aviation, and energy.

Pundits have pointed to a widespread sense of betrayal among workers, furious that a nominally Socialist government would be introducing such “reforms.” But the movement is,
at least, attempting to get beyond that. There is a strong anti-capitalist sentiment among the Nuit Debout discussions.
REACHING BEYOND REFORMISM?

That sentiment has not yet been able to seriously connect with the rebellious African and Arab youth of the working-class suburbs or banlieues, who suffer from both capitalism and racism, but it has, significantly, understood the importance of doing so.

Likewise, the militancy of the rank and file has been sold out in the past, as in 1968, by labor bureaucrats oriented toward state power. All these state powers want to manage human beings. But to be human is to want to determine one’s own life, and that can only happen when the free development of each is the free development of all.
—Gerry Emmett

← World In View: Zimbabwe succession
July-August 2016 N&L available on the web →
This work is licensed under a Creative Commons Attribution-ShareAlike 4.0 International License