Supreme Leader Ayatollah Khamenei has declared workers fighting for rights to be enemies of the state. Yet the religious pretences of Iran’s greedy and murderous ruling class continue to be exposed by the political prisoners held in Evin Prison. 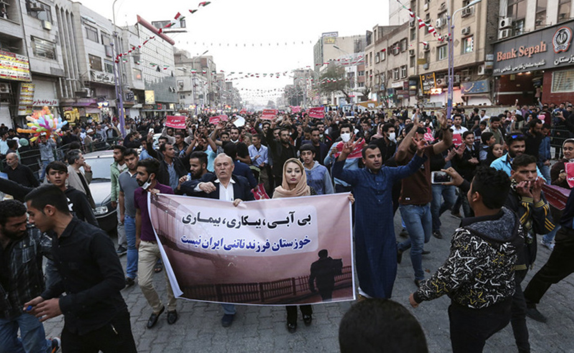 Demonstrators in Ahwaz, Khozestan. The banner says: ‘No Water, no Jobs, no Health,” Khouzestan is not Iran’s step-child.”

Esmail Abdi, a teachers union activist, and engineer Narges Mohammadi, a women’s rights activist, are both serving sentences for “propaganda against the state.” What follows is excerpted from their recent letters from prison.

Esmail Abdi: “…[The] revolution took place in 1979 with the promise of ending dictatorship, establishing democracy, implementing transparency and preventing the accumulation of wealth in the hands of a particular class; a revolution that the clerics and some political groups said would be a harbinger of peace and freedom and put an end to poverty and discrimination, where people would have access to free water and electricity and enjoy such rights as freedom of thought and expression, free and equal education, with the right to form organizations and unions, hold protests and strikes, assemble and rally and be equal before the law.

“But these aspirations did not amount to anything besides slogans. The blessings of the revolution benefitted not the poor but rather the rich, the powerful and tricksters. The groups that came to power used the state media to promise a better and more dignified life. They took advantage of the people’s beliefs and values to attract votes while amassing wealth from the nation’s treasury…”

Abdi was scheduled to begin a hunger strike on April 18.

Narges Mohammadi: “What we experience is a decades-old tyranny, that can’t tolerate freedom of speech and thought. In the name of religion, it restricts and punishes science, intellect, and even love. It labels as a threat to national security and toxic to society whatever is not compatible with its political and economic interests…

“Tyranny doesn’t impose itself only in the political sphere. This tyranny uses every possible leverage at the disposal of the state to institutionalize discrimination on the basis of gender, sexuality, religion, ethnicity, and ideological orientation, particularly against women. By sustaining patriarchal dominance, drafting and enforcing misogynistic laws, and even by fabricating a false culture in contradiction with the norms of the society, it deprives women of their human and civil rights and seeks to prevent them from social engagement…

“Iran is an oil and gas rich country but millions are deprived of decent living standards. Mismanagement and corruption result in high rates of unemployment, widespread poverty and suffering, and deny people their economic rights.”

← Voices From the Inside Out: ACCESS/KEEFE robs prisoners’ families
From the Writings of Raya Dunayevskaya: New moments in Marx form trail to today →
This work is licensed under a Creative Commons Attribution-ShareAlike 4.0 International License