Nicaragua is in deep crisis. In early April, university students and environmentalists protested against the government’s failure to act decisively against wildfires in the Indio Maíz biological reserve. They called themselves the autoconvocados (the self-assembled).

At the same time, President Daniel Ortega had imposed drastic pension “reform” without consultation. Pensioners together with students, environmentalists, feminists, religious leaders, Black and Indigenous activists, journalists, as well as left-wing and right-wing opposition groups, coalesced in protest. Tens of thousands took to the streets. Ortega responded violently. Almost 150 have been killed by government forces, and thousands injured.

An autoconvocados activist, Madelaine Caracas, spoke of their movement: “We trust no one. In Nicaragua there is no opposition. They are all the same….It is all Nicaraguans who are in the streets. It is no political party, no liberals, no conservatives, not the CIA. It is an awakening; we are tired of seeing our brothers killed.”

Today, close to four decades after the Sandinistas first came to power, how could Nicaragua arrive at a Sandinista leader, Ortega, ordering the shooting of his own citizens? 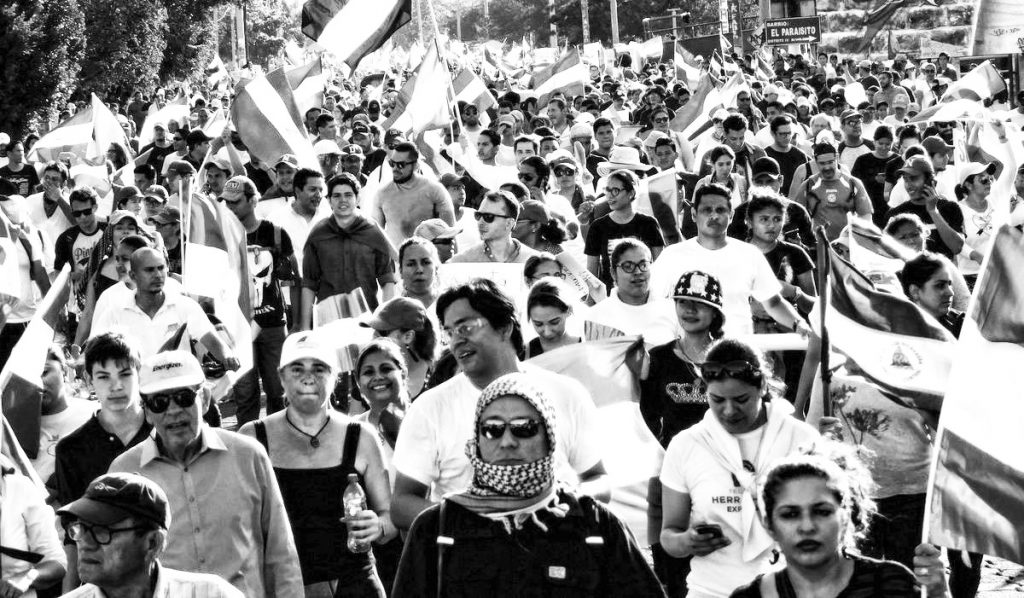 The 1978-79 Revolution, led by the Sandinista National Liberation Front (FSLN), ousted the Somoza dictatorship. It was a mass rebellion of hundreds and then thousands of Nicaraguans in urban areas.

Once in power the Sandinistas carried out an agrarian reform and a literacy campaign, and created a public health service, among other things. They did so with popular participation, but often in tension with their insistence on top-down control.

They did this while enduring murderous assaults by U.S. imperialism during the Reagan presidency and its funding of the Contras, a collection of counter-revolutionary groups. After a decade of seeking to advance a revolution surrounded by a constant counter-revolution, the Sandinistas lost an election and yielded power.

In the years that followed, the Sandinistas, led by Ortega, lost three elections. Finally, in 2006, they won. But what kind of transformation did they undergo? Ortega decided the only way to win was to make alliances with the opposition—in particular the Catholic Church and big business.

The first concession to the Church in 2006 was to pass a law prohibiting all abortions, even in cases of rape or danger to the life of the woman. This, in a country with a high incidence of violence against women and children.

Then came neoliberalism, with the deregulation of the economy, the signing of free trade agreements and the creation of public-private partnerships that guaranteed lucrative business to the private sector—capitalism at the expense of the public treasury. At the same time Ortega’s rhetoric continued to be “anti-imperialist.”

The concrete reality of life and labor came to a head, with the massive protests and Ortega’s murderous response. Much of the international Left continues its knee-jerk defense of Ortega’s dictatorial rule in the name of so-called anti-imperialism. But as the Portuguese left sociologist Boaventura de Sousa Santos asks: “Can a government continue to be called left (and even revolutionary) despite following the ideology of neoliberal capitalism with the conditions it imposes and the consequences it generates?”

Nicaragua is a deeply divided country. Ortega’s “Sandinismo” has long ago betrayed the ideals it began with, and no longer represents a viable alternative. The Nicaraguan masses will need to create an emancipatory alternative.

← World in View: Gaza, Israel and Trump
Review of ‘Reproductive Justice: An Introduction’ →
This work is licensed under a Creative Commons Attribution-ShareAlike 4.0 International License