Editor’s note: To mark International Women’s Day/Women’s History Month as a time of revolutionary thought as well as activity, we present “Excerpts from a Radio Interview: On the Family, Love Relationships, and the New Society,” originally published as Chapter 21 of Women’s Liberation and the Dialectics of Revolution: Reaching for the Future. The chapter, presented here in full, was transcribed and excerpted from her interview by Katherine Davenport, which aired on WBAI radio in New York City on International Women’s Day, March 8, 1984. It brings together women’s liberation and revolution in permanence, further illuminating the new book Marx’s Philosophy of Revolution in Permanence for Our Day: Selected Writings by Raya Dunayevskaya.

Katherine Davenport: Rosa Luxemburg wrote of the need for “dispelling the suffocating atmosphere of the present philistine family life.” This is still a problem today and could be summarized, in my opinion, as heterosexism manifested in the nuclear family. We’re still oppressed by reactionary socio-political values that retard social evolution to a more equalitarian and intelligent way of relating to people and the world in which we live.

When I think in terms of a socialist state, I think in terms of a society where adults, whether they be women or men, would be free to do what they do best, and their children would be cared for by people who are professionally trained to raise children, so that the children would have genuinely equal opportunities, regardless of their color or anything else. That to me would mean the dissolution of the nuclear family. 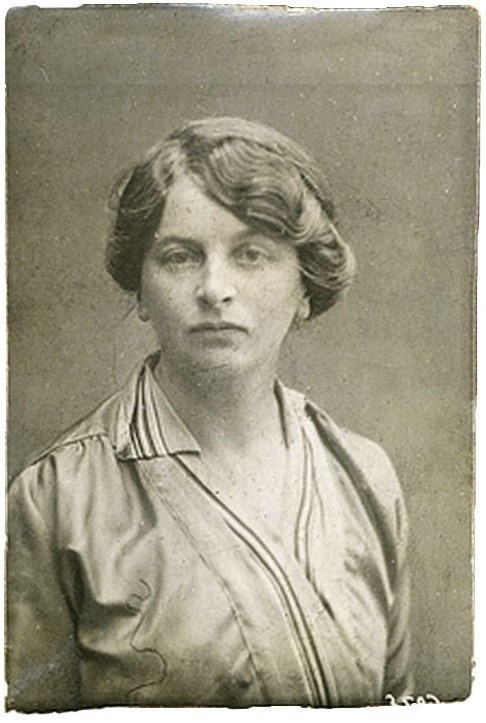 Inessa Armand (in the photo) and Aleksandra Kollontai (below) founded Zhenotdel, the women’s department (1919-1930) after the Russian Revolution.

Raya Dunayevskaya: . . . On the question of the family, Marx expressed himself very openly. At the beginning of his revolutionary writings, in the 1840s, in the Communist Manifesto, he called for the abolition of the family. That was that. He said that anyone who thinks it isn’t connected with class society, with monogamy, with property, is crazy. But the point was that he didn’t want to create another universal as the “answer.” It would be just as stupid to give the answer on the family as to think that the nuclear family and Christianity is the way. We should he very, very open.

In the 1960s, many people tried new lifestyles and “free love.” When I was young, “free love” meant that you lived without a marriage license, without going to the priest or the state. You lived with your love, and if you didn’t love him anymore you left him or he left you. In the ’60s, “free love” meant living a different lifestyle, but I don’t think all those new lifestyles in the ’60s were more revolutionary than we women who just limited it to not having to go to a priest for a license. There is no way of saying that this is “the” revolutionary way.

Or take the question of gay liberation. Some people try and say that because Marx didn’t raise the question of gay that that means he was opposed. But it was another age that he lived in, and there was no gay liberation movement. Gays were in the closet. Marx certainly would have been for a great writer like Oscar Wilde doing whatever he pleased and not having all that trouble because he was gay. But you can’t make your right to your own kind of love-making as if that is the answer for everyone.

People want to have a conclusion on the question of love—what is love, whether it’s physical, whether it’s emotional, whether it’s total, and all that sort of thing. But I don’t think it’s correct for us to try and solve it for others. I think what we have to do is to create the conditions for everyone to be able to experiment with choices, in love, in the family—and I don’t think we’ll really have those choices until we get rid of capitalism.

Capitalism tries to use everything for its power. That’s why Marx criticized science under capitalism and said it was not neutral—“To have one basis for life and another for science is a priori a lie.” He said that phrase in the same essay, 1844, Private Property and Communism, in which he discussed how pivotal is the Man/Woman relationship, and not only the class struggle. And I used that sentence to show what capitalism had done with the splitting of the atom. Why did it take them 40 years to split the atom, after Einstein’s theory of relativity? Because until the capitalists saw an immediate use for their power, they weren’t going to develop it, and so the smashing of the atom became not the greatest productive force but the most horrible destructive force. That is going to be true all the time, if you separate science from life and don’t do it for human beings to be able to have all their talents develop. 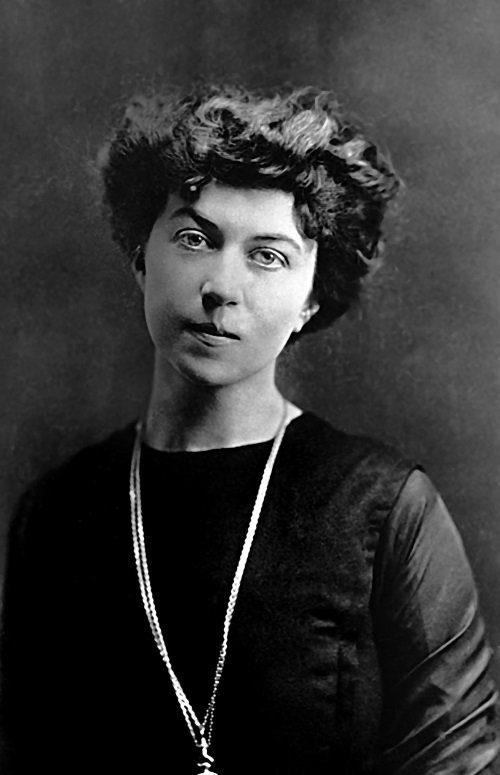 So, in terms of new family forms, it’s not a question of having a “scientific” answer. We can look at what has happened in revolutions. The question of the family is something the Russians did do a lot of experimenting with, after the Russian Revolution and before Stalin destroyed Zhenotdel, the Women’s Department. Their conception was that it was very important to get the woman out of the kitchen, and that she should have all the experiences that the man had. After the child was two years old, there would be nurseries, so that the individual woman was not responsible.

But two kinds of questions came up, that the women themselves raised. One, the women began questioning the fact that their children were so much exposed to the ideology of the state, that they were always under the control of the state. The second question was that many women said, Yes, I would like the child not to be home while I am working, but I want to have my child at home at nights, or on weekends, or whatever; I want that kind of love relationship. In any case, there were still many things to straighten out—not excluding the fact that there were incidents where the husband literally killed his wife because she dared to live the new way!!—but then Stalin destroyed Zhenotdel and didn’t permit the experiment to go on at all.

In the Chinese experiment, it happened also that the young Chinese women felt, My God, my child isn’t going to know me at all, and I’m not going to know it. Yet I’m the one that bore him, because I wanted him, or wanted her.

So I don’t think there is a way we can know the answers beforehand. We are so backward on the whole question that we will have to go through a lot of stages of actual experimentation, with people having the right to choose. There is just no way of giving the answers from above. That is why I emphasize that the expression “revolution in permanence” as Marx used it (Marx, and not Trotsky’s “permanent revolution”) was not just a political expression, the overthrow of the old regime. That is only the first stage. Now that you’ve gotten rid of what is, what are you going to do to create the new?

Marx’s Critique of the Gotha Program is the finest critique in the sense of seeing that the revolution in permanence has to continue after the overthrow. Yes, there’s the idea that there’s a transition period, and the state will wither away—but in our age we know that we’ve seen an awful lot not of withering away but the state getting totally totalitarian. So the point is the recognition of what Marx meant by revolution in permanence, that it has to continue afterwards, that it encompasses the criticism that’s necessary, the self-criticism that’s necessary, and the fact that you have to be very conscious that until we end the division between mental and manual labor—and every single society has been characterized by that, and it was even in primitive communism—we will not really have a new man, a new woman, a new child, a new society.

So therefore you should know that the minute you win, your problems aren’t ended. That’s exactly what our age is facing: that the depth of the uprooting is not really seen, when it’s considered just a question of overthrowing the oppressor, not the creation of the new society. You must never forget that the revolution in permanence refers to you too, not just to the enemy, and that it has to be continuous after the day of the revolution and the conquest of power, as much as the day before.

As if Workers’ Councils, Neighborhood Committees, anjumani, many new forms of spontaneous organization, and youth dominant in all, did not take on the apparition of a dual government, there came, with the celebration of International Women’s Day, a mass outpouring of women, bearing the banner, “We made the revolution for freedom, and got unfreedom” which may very well have opened Chapter 2 of the Iranian Revolution.

—From “Iran: Unfoldment of, and Contradictions in, Revolution” in
Crossroads of History: Marxist-Humanist Writings on the Middle East 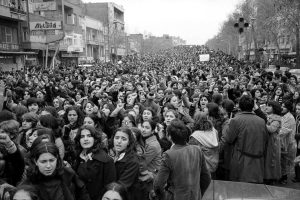 It becomes clear that religion is no substitute for a philosophy of liberation. Quite the contrary; its mysticism only shrouds the elemental forces and deviates from the masses in motion and their quest for universality—freedom. That is why, from the beginning, we warned against the underestimation of Khomeini’s power and the price that the mullahs would exact for having allowed the mosques to be used for meetings of the Left during the reign of the Shah when it was illegal to meet elsewhere.

—From “The Struggle Continues: What Kind of Revolution Is Needed in the Battle against the Khomeini-IRP Counter-Revolution?” in
Crossroads of History: Marxist-Humanist Writings on the Middle East

← Essay: What is Socialism? Socialism and a philosophy of revolution
Woman as Reason: Church abuses nuns →
This work is licensed under a Creative Commons Attribution-ShareAlike 4.0 International License