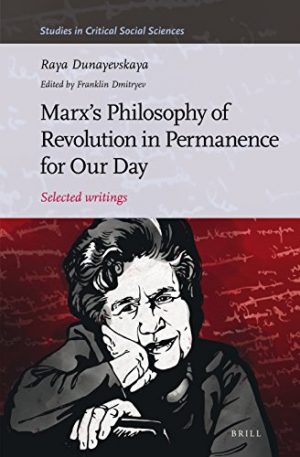 Marx’s Philosophy of Revolution in Permanence for Our Day: Selected Writings by Raya Dunayevskaya

Part 1. The Philosophic Moment of Marx: Marx’s Transformation of the Hegelian Dialectic

Part 2. The Inseparability of Marx’s Economics, Humanism, and Dialectic

5. Capitalist Development and Marx’s Capital, 1863–1883
6. Today’s Epigones Who Try to Truncate Marx’s Capital
7. Letter to Herbert Marcuse on Automation
8. Marx’s Grundrisse and the Dialectic in Life and in Thought
9. Capitalist Production/Alienated Labor
10. Marx’s Critique of Culture

Part 3. Post-Marx Marxism and the Battle of Ideas

11. Post-Marx Marxism as a Category
12. Hobsbawm and Rubel on the Marx Centenary, but Where is Marx?
13. Marx’s Philosophy of Revolution vs. Non-Marxist Scholar-Careerists in “Marxism”
14. Paul Mattick: Economism vs. Marx’s Humanism
15. Bertell Ollman: Pitting “Human Nature” against Marx’s Humanism
16. The Dialectic of Labor in Marx and “Critical Thought”
17. Gramsci’s “Philosophy of Praxis”
18. Rosdolsky’s Methodology and Lange’s Revisionism
19. Adorno, Kosík, and the Movement from Practice

Part 4. Marx as Philosopher of Revolution in Permanence—Reading Marx for Today

20. Introduction to Philosophic Notes
21. The Emergence of a New Movement from Practice that is Itself a Form of Theory
22. New Stage of Production, New Stage of Cognition, New Kind of Organization
23. The Dialectic of Absolute Idea as New Beginning

Section B. Black Liberation and Internationalism

24. Abolitionism and the American Roots of Marxism
25. Marx and the Two-Way Road between the U.S. and Africa
26. Black Intellectuals in Dilemma

Section C. Women’s Liberation and the Dialectics of Revolution

What is Marx’s philosophy of revolution in permanence, and why is it urgent for today?

This Marxist-Humanist book takes up

Dunayevskaya reads the revolts of everyday people around the world, which she constantly watched with a close eye throughout her life, as both an oppositional force to, and a philosophical questioning of, the capitalist reality….only Dunayevskaya regularly insisted upon seeing revolt as a philosophical event….Dunayevskaya articulates a distinct position that connects mass rebellion to “philosophic cognition.”
—Richard Gilman-Opalsky

Dunayevskaya’s work…is an explication of the fullness of Marx’s thought  as she came to live it, in living through the liberation movements of her own era….What is finally so beautiful and compelling about the Marx she shows us is his resistance to all static, stagnant ways of being, the deep apprehension of motion and transformation as principles of thought and of human process, the mind-weaving dialectical shuttle aflight in the loom of human activity. Raya Dunayevskaya caught fire from Marx, met it with her own fire, brought to the events of her lifetime a revitalized, refocused Marxism.
—Adrienne Rich

First, last, and always, Raya Dunayevskaya was a revolutionary. Revolution in permanence, transforming the world to create a truly free society on new human foundations, is what her life was about. That is central to the affinity she felt with Karl Marx….Dunayevskaya’s writing pulsates with the living history of freedom struggles and the ideas growing out of those struggles. That very commitment to revolution, in the face of all its contradictions, inexorably led her into an ever-deeper relationship with philosophy….Thought to her was not limited to the great philosophers. Revolution, she insisted, is in the thinking as well as doing of those struggling for freedom, workers, women, youth, Blacks, Latinos, LGBTQ people, oppressed nations. All this led to her own original contribution with the creation of the philosophy of Marxist-Humanism. At its core is a new concept of the relationships of theory and practice, philosophy and revolution.
—From the Introduction