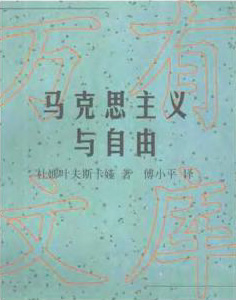 Marxism and Freedom, from 1776 until Today: Chinese translation

Raya Dunayevskaya’s classic explication of Marxism in Chinese. The first book on Marxist-Humanism, it was originally published in 1958 and has been in continuous publication. It has been translated into Spanish, French, Italian, Chinese, Japanese, and Arabic. Published by Liaoning Education Press with a preface by the Marxist humanist philosopher Wang Ruoshui.

In this classic exposition of Marxist thought, Raya Dunayevskaya, with clarity and great insight, traces the development and explains the essential features of Marx’s analysis of history. Using as her point of departure the Industrial and French Revolutions, the European upheavals of 1848, the American Civil War, and the Paris Commune of 1871, Dunayevskaya shows how Marx, inspired by these events, transformed Hegel’s philosophy to analyze the course of history as a dialectical process that moves “from practice to theory” as well as from theory to practice. The essence of Marx’s philosophy, as Dunayevskaya points out, is the human struggle for freedom, which entails the emergence of a proletarian revolutionary consciousness and the discovery through conflict of the means for realizing complete human freedom.

But freedom for Marx meant freedom not only from capitalist economic exploitation but also from all political restraints and the free development of human beings as social individuals. Continuing her historical analysis, Dunayevskaya reveals how completely Marx’s original conception of freedom was perverted through its adaptations by Stalin in Russia and Mao in China, and the subsequent erection of totalitarian states. The exploitation of the masses persisted under these regimes in the form of a new “state capitalism.”

Yet despite the profound derailment of Marxist political philosophy in the twentieth century, Dunayevskaya points to developments such as the Hungarian Revolution of 1956, workers’ struggles against capitalist automation, and the Civil Rights struggles in the United States as signs that the indomitable quest for freedom on the part of the downtrodden cannot be forever repressed. The Hegelian dialectic of events propelled by the spirit of the masses thus moves on inexorably with the hope for the future achievement of political, economic, and social freedom and equality for all.

Contents
Part I • From Practice to Theory: 1776 to 1848
Part II • Worker and Intellectual at a Turning Point in History: 1848 to 1861
Part III • Marxism: The Unity of Theory and Practice
Organizational Interlude
Part IV • World War I and The Great Divide in Marxism
Part V • The Problem of Our Age: State Capitalism vs. Freedom

“Dunayevskaya . . . has the capacity, rare in people as learned as she is in Western philosophy and theory—including Marxists—to respect and learn from other kinds of thinking and other modes of expression: those of the Third World, of ordinary militant women, of working people . . . to recognize the acute significance of . . . The Black Dimension.”—Adrienne Rich, The Women’s Review of Books

“We fight, in Dunayevskaya’s vision, to realize the full being, inner and outer, of the oppressed. Once this is grasped, no bureaucratization, no state capitalism, no recycling of domination, can stain the radical project. Nor can this project be extinguished by the triumph of reaction such as we have witnessed in recent years…. There is a magnificence about Raya Dunayevskaya’s thought, well illustrated in this, her path-breaking volume, which provides a real ground for that hope. It is a ground that remains to be built upon.”—From foreword by Joel Kovel.