Texas law enforcement officials, school superintendents and sexual assault survivors rallied at the Capitol against Republican legislation requiring people to use restrooms, showers and locker rooms in public schools and government facilities that match the sex on their birth certificate. Austin Police Chief Brian Manley disputed the notion that Transgender people put women and children at risk, saying the legislation is an attempt to solve a problem “that I do not believe exists.” In fact it is Transgender people who are harassed, molested, raped and murdered. 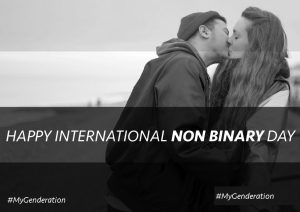 International Non-Binary Day, celebrated on July 14 since 2012, is a call to recognize that Non-Binary (NB) people have always existed. NB people identify in ways including, but not limited to, fluid gender identity; fixed gender identity that is neither feminine nor masculine, neither woman nor man; having a gender identity—fluid or fixed—free of gender roles, expectations and pronouns. They require being called by their choice of pronouns and safe community spaces free of oppression.

LGBTQ Pride marchers at the ten-day World Pride 2017 festival in Madrid called attention to how many worldwide are persecuted, even killed, for being Queer. They called on the World Health Organization to stop identifying Transgender identity as a mental illness and upon the European Union to help spread LGBTQ rights across the globe.

The Illinois House of Representatives and Senate have passed legislation banning Transgender and Gay panic defense. Attackers will no longer be able to justify assaults, including murder, by claiming they feared their victims’ sexual orientation or gender identity threatened their safety. If Governor Rauner signs the bill, Illinois will join California as the only states with such a law.

← World in View: When war opens the door to famine
The struggle in Diego Garcia continues →
This work is licensed under a Creative Commons Attribution-ShareAlike 4.0 International License