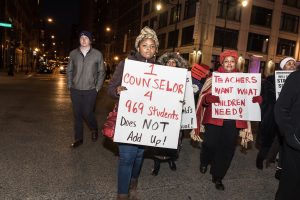 Chicago—One of the most exciting developments here is the potential coming together of the struggle of labor against government cutbacks and austerity, and the Black Lives Matter network’s powerful critique of racist inhumanity. These movements have been coming together in the streets to oppose Mayor Rahm Emanuel’s and Governor Bruce Rauner’s attacks.

The Chicago Teachers Union (CTU) is threatened with further salary cuts and may have to strike. By closing schools and shuttering mental health clinics, Mayor Rahm Emanuel’s administration adds to the risks faced especially by Black and Latino youth. The notorious school-to-prison pipeline is one result of cutting human services to poor communities. The police murders of Laquan McDonald, Quintonio LeGrier and activist Bettie Jones, among many others, demonstrate the inhumanity that colonizes the community. Black Lives Matter activists have illuminated these brutal social relations for all the world to see.

The Chicago Teachers Solidarity Campaign and Jobs With Justice have put together a forum to be held in March, which will bring the voices of labor—including CTU President Karen Lewis, along with speakers from the Amalgamated Transit Union and AFSCME—together with Black youth activists from Chicago State University and Black Youth Project 100 (BYP 100).

Chicago State University (CSU) is a perfect example of the racist austerity practiced by Illinois Governor Bruce Rauner. It serves over 4,800 mainly Black working-class students; it has hosted important Black cultural events. Massive budget cuts threaten its closure. It would be a huge loss to the community, and if it loses its accreditation, students won’t even be able to transfer their credits to other schools.

The Black Lives Matter network, including BYP 100, has opened a new level of discussion, showing that this kind of insult isn’t seen as “only” a budget decision. It is a continuation of the same U.S. history of slavery, Jim Crow, and the criminal injustice system.

TRIBUNE OF THE PEOPLE

The forum will also feature a speaker from ADAPT, the militant disability rights organization. People with disabilities, people with AIDS, and others of the most vulnerable (especially if they are also working-class and of color) have been fighting the effects of drastic cuts in spending for a long time.

The agencies that serve these communities are often vulnerable to pressure and hesitant to complain. Lutheran Social Services, the State’s largest provider of services, recently announced a $6 million funding shortfall and laid off 40% of its workforce. AIDS service agencies have also been driven to the brink.

Social services clients need a vocal movement as the kind of tribune of the people that will make these social relations transparent, as Black Lives Matter has done for so many issues, and as ADAPT has fought to do for the disabled.

It is a question of dignity and self-determination. This coming together of labor, Black youth, and all who are affected by cutbacks and austerity, should be a potent new beginning of the needed fightback. The focus on “financial” issues as being human relationships opens up new areas to both practical and theoretical development.