In California the ongoing struggle of prisoners against the U.S.’s barbaric criminal justice system reached a milestone in the effort to totally transform a society in which millions of poor, unemployed and people of color end up in an inhuman gulag.

For decades California prisons put people in solitary (Security Housing Units, or SHU) indefinitely, solely on a guard’s designation of a prisoner’s status as a gang member. The SHU filled up with prisoners who were never to get out unless they implicated others (“snitch or die”).

A settlement, announced on Sept. 1, of a class action lawsuit, Ashker v. Brown, abolished “status-based” solitary. All SHU terms will now be determinate and only for specific behavior while in prison.

As the named plaintiffs put it in their statement:

“This settlement represents a monumental victory for prisoners and an important step toward our goal of ending solitary confinement in California, and across the country. California’s agreement to abandon indeterminate SHU confinement based on gang affiliation demonstrates the power of unity and collective action…. Our movement rests on a foundation of unity: our Agreement to End Hostilities. It is our hope that this groundbreaking agreement to end the violence between the various ethnic groups in California prisons will inspire not only state prisoners, but also jail detainees, county prisoners and our communities on the street, to oppose ethnic and racial violence. From this foundation, the prisoners’ human rights movement is awakening the conscience of the nation to recognize that we are fellow human beings.… We celebrate this victory while, at the same time, we recognize that achieving our goal of fundamentally transforming the criminal justice system and stopping the practice of warehousing people in prison will be a protracted struggle. We are fully committed to that effort, and invite you to join us.”

An important beginning was the historic 2011 hunger strike, which brought to the world’s attention the torture committed in U.S. prisons. The prisoners worked hard to overcome the racial enmity fomented by the guards who ramp up racial hatred.

The “short corridor” at Pelican Bay State Prison was designed to isolate the unbroken prisoners from even their own racial group. The men of the short corridor, however, created, out of their proximity to their prison-designated enemies, an opportunity to overcome those divisions.

When they called for outside support for their hunger strike, they expressly requested that images used in publicity include all races. The logo (see graphic, p. 10) they created for the strike was of hands of all colors grasping each other.

Their demand in the 2011 hunger strike that they be “validated as human” is not a denial of race. It is a deepening of what it means to be human. As we said in our 2012 pamphlet “We want to be validated as human”:

“In contrast to the gang worldview of other-as-enemy, the hunger strikers at Pelican Bay and other California prisons reach for a new universal, asserting the fundamental dialectical connection of one human being to another as a human being.”

Prisoners’ inspiring non-violent action shined a light on torture committed right in the U.S. as public opinion turned around with condemnation in the mainstream press, even statements from Sen. John McCain, held in solitary as a POW in Vietnam.

The prisoners convinced their families to support them publicly. Some family members worried that if they spoke out the CDC would retaliate against loved ones inside. The families came to understand that it was the prisoner’s choice to join the hunger strike, that they were doing it for everyone. 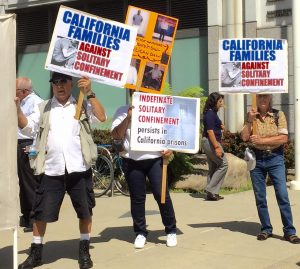 From left to right: prison activist Bato Talamantez, a family member of Victor Gallegos, and Penny Shoner stand up for California Families to Abolish Solitary Confinement during the Sept. 1 announcement of a settlement ending indeterminate use of solitary in California.
Photo: Urszula Wislanka/News & Letters

Families Against Solitary Confinement (CFASC) is a new, eloquent dimension of the movement expressing the thoughts and feelings of those they love to the media, legislators, courts, and especially in support of each other.

Partly because the families’ voices were so powerful, the movement spread. Lawsuits were filed. Many demonstrations, talks, community events, teach-ins, etc., were held throughout the state. Following the lead of the prisoners, CFASC organizes across racial lines.

In 2012 the prisoners, determined to continue the fight, came out with an historic Agreement to End Hostilities. It called on prisoners to not allow the prison to set one group against another.

What is exciting about the movement is prisoners acknowledging each other’s humanity. The prisoners are not asking to be set free, they admit that some did terrible things.

Their message—to nurture one’s humanity, not to reduce others to a thing—speaks to the inhumanity that plagues the whole society. A “thank you” card from a prisoner we visited reads:

“A caged man is a spirit trapped in steel—leave him alone and his spirit becomes one with his cage—it’s all he knows. Motivate him, nurture and socialize him, and his spirit soars. It’s only then that the man realizes the difference between him and his cage—the reasons for it. Thus, allowing him to finally be free from it.”

The movement does not seek spectacles or stop at confrontations with authorities. It seeks to change the minds of ordinary people.

WE SPEAK IN MANY VOICES

There are many different voices within and supporting the Prisoners’ Human Rights Movement. Many groups participate in the actions on the 23rd of each month. There are more documentaries, more plays like If the SHU Fits, more vigils, prayer meetings, demonstrations not just across California, but all over the country—Boston, Philadelphia, etc.—and even international support from Mexico, Guantanamo and Palestine. There are still those who want to get legislation through, starting with banning putting minors in solitary. The settlement of the class action lawsuit is but one venue, one expression of the movement.

Now that hundreds of prisoners long held in the SHU are being released from solitary, there are mixed reactions. On the one hand, the relief, gratitude and flowering of those who can at last see the sun and have a first contact visit is overwhelming.

On the other hand, guards have not been a party to the settlement. Some are predicting a dire rise in violence and doing everything in their power to cause prisoners to explode. They “accidentally” open doors to cells housing prisoners whom the guards deemed enemies of each other, expecting them to fight. They have not.

At Pelican Bay SHU the so-called “wellness” checks have become torture as guards open the loud metal doors to each unit, stomp through the hallways, bang metal batons against the metal doors, etc. (see “California prisons’ punitive ‘wellness checks,’” Sept.-Oct. 2015 News & Letters). Prisoners there have been deprived of sleep for over two months, increasing stress levels and health problems, including thoughts of suicide these checks are meant to prevent.

There are some hints that attitudes among guards may be changing. We heard reports of administrators and some guards looking forward to receiving prisoners who have been released from solitary. They know it will have a calming effect in their prison, as those prisoners have a great deal of credibility and they are serious about the Agreement to End Hostilities.

WHAT IT MEANS TO BE HUMAN

The challenge to what it means to be human remains the bedrock. Here are a few of the things we heard when we visited Pelican Bay in August:

•  All hunger strikes were rough to participate in. But it was a fight we had to take.

•  My colon collapsed during the hunger strike. I have a colostomy bag now and can’t sleep because I can’t get meds to keep my gas under control, but it was worth it!

•  The hunger strike created a bond between prisoners. The Agreement is holding in the SHU, no incidents. I dropped my prejudices. The guards were sure that when they let Nortenos and Surenos out on the yard at the same time, they would fight each other. But they don’t!

•  I’ve stayed in the SHU because my moral beliefs (not debriefing) are precious to me. The media (PBS documentary “Solitary Nation”) is focusing on how solitary victimizes people: cutting themselves, etc. I do see strong men break—we are buried alive in here. But we are not all like that. We are very sane, we have self-respect.

•  When you’re in prison, you change. I tried to stay who I was before I came here. But I was young, self-centered. After all this time you no longer think just of yourself, but all the others, too, including those outside and those who will come here after you.

•  The hunger strike humanized prisoners. My family and others got a whole new outlook on the criminal justice system. Many young people make bad choices and California throws them away. People aren’t born with the tools to be good parents and make good decisions. Does that mean you don’t value those people and put them in SHU for 30 years? We got time to think. The Agreement to End Hostilities gave us power. When prisoners come together as people, we are much stronger.

The principles that make it possible for prisoners to resist CDC’s pressure to tell on others are the definition of what it means to live life as a human being. It is a recognition that my every individual act is at the same time a social act; that even in the most dire circumstances, I don’t forget that I live as a social being, a human being.

That new concept of what it means to be human is what enables prisoners to resist the guards’ current efforts to worsen conditions. By resisting forced isolation, prisoners re­established their connection to one another and asserted their essential humanity. That is a beginning of a revolutionary reorganization of society.