Chicago—Activists in solidarity with the Syrian Revolution came together March 24 to hold a vigil on Chicago’s North Michigan Avenue. We were there to oppose the bombing of civilians, hospitals, schools, and children in the Syrian province of Idlib by the Bashar al-Assad regime and Russian allies.

Messages on banners and signs in English, Arabic and Russian reaffirmed solidarity with the Syrian people against Assad and called for an end to bombing of civilians in Yemen and freeing of political prisoners in Russia. A sign in Russian said, “Putin, hands off Crimea, Donbass, Moldova, Georgia, Itchkeria [Chechnya]!” 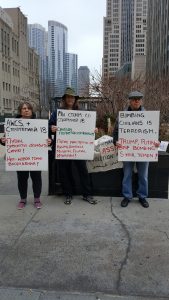 The vigil was called by the Anti-War Committees in Solidarity with the Struggles for Self-Determination. Many passersby took a leaflet, one side of which reproduced a letter, “From a Free Syrian Teacher in Idlib to U.S. Representatives Ilhan Omar and Rashida Tlaib.” It said in part:

FROM IDLIB TO THE WORLD

“First, I wish to express my appreciation for your statements on the eighth anniversary of the Syrian struggle for freedom…

“…I am a teacher in the province of Idlib. Our city is the most dangerous in the world. Idlib lives under attack night and day by the Assad regime and Russia, and is constantly threatened by violently sectarian Iranian militias. We have been under attack for eight years, and many good men, women and children have been martyred. The attacks, the bombings, are relentless. There is no safe place to live. Moreover, the air and artillery strikes have caused great physical damage; sometimes we go without electricity for days.

“Our children often cannot go to school; our hospitals are targeted. Many injured by the bombing die for lack of treatment. We live constantly with a fear of death…

“The situation has become even more critical now that aid agencies, under pressure to avoid letting funds fall into the hands of the sectarian terrorists of Hayat Tahrir al-Sham (HTS), have cut off all funding to the province. Our hospitals lack medicines, our schools need supplies, our doctors and teachers work without pay. In my case, I am fortunate as I am able to work a job at night so that I can continue to teach our children during the day…Why are there international discussions about renewing aid to the regime, even as it executes prisoners and bombs us day and night? It feels as if we are expected to die alone, and quietly.

“For weeks now our communities in Idlib, with support from Syrians in exile around the world, have been mobilizing in peaceful marches to commemorate the eighth anniversary of our struggle, to demand freedom for the political prisoners, and to defy the regime’s attempt to terrorize us with bombing. We also want the world to know that we are not HTS…We are not terrorists. The Assad regime is terrorizing the Syrian people.

“We often wonder why we have been abandoned. Millions of Syrians are trapped in refugee camps and in exile, thousands are dying in prison, raped, tortured and starving. Homes, families, our country, have been destroyed to preserve a dictator. Does no one care? Your words in support of our struggle are so very important; we must find a way to help others to understand as you do.

“We want the world to know that we, and our children, have a right to a dignified life, as we too are human…

← V. What to do in a world in upheaval
Letter from Mexico: Remembering Emiliano Zapata →
This work is licensed under a Creative Commons Attribution-ShareAlike 4.0 International License