This month saw a multiplicity of daily Black Lives Matter protests, in both city and suburbs, illuminating revelations of and resistance against systemic racism. The racist backlash is heating up:  yesterday a police vehicle drove through a protest march in Southwest Detroit, injuring several people.

POLICE BRUTALITY THE TIP OF THE ICEBERG 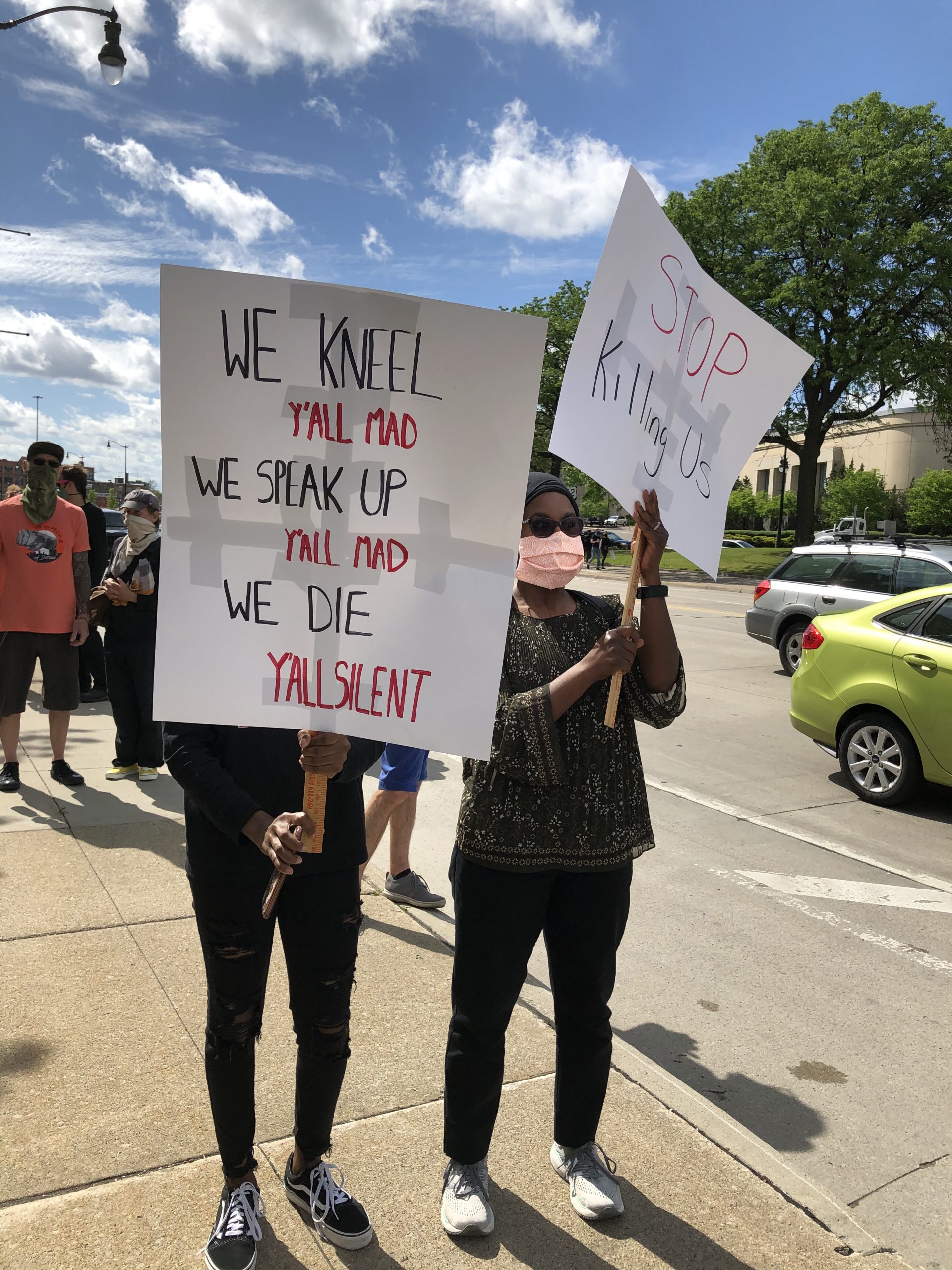 One of the many Black Lives Matter demonstrations in Detroit, this one on June 29, 2020. Photo by Susan Van Gelder for News & Letters.

The variety of demands, messages and participants strengthens the increasing fundamental rethinking about public safety, of which police brutality is the tip of the iceberg.  Protestors are saying that racism is manifest everywhere and the protests must not stop until real change is achieved in housing, economic opportunity, economic and environmental justice, and in the education of our youth.  That is what public safety means.

One example: “In the coming weeks Detroit People’s Platform will continue with our ally Equitable Detroit, the citywide [Community Benefits Ordinance] CBA coalition, to organize with Detroiters and call for corporate accountability. We will also mobilize Detroiters to demand elected officials move forward and pass the necessary amendments the Community Benefits Ordinance in this year’s legislative session. This will create a CBA ordinance that gives Detroiters voice and power.

“Failing to raise the slightest objections or make demands on behalf of Detroiters, many of the elected usually defer to the white corporate class while at the same time paying little to no attention to the concerns of residents who show up asking for a fair deal…. This is the unspoken form of economic and political violence perpetrated against Black Detroiters.”

As elsewhere, new forms of art are springing up like the blocks-long “Majority Black Detroit Lives Matter” and “Power to the People” street art downtown, inspired by the “Black Lives Matter” street painting in Washington, DC. This spurred some Detroit mothers and grandmothers, frustrated with vehicles speeding through their residential neighborhood, to paint colorful footprints to guide children safely across a dead-end block to a little park.  We then decided to paint the dead-end street itself, giving children the opportunity to create art there.

EVICTIONS ON THE HORIZON

However, Detroiters are bracing for a wave of evictions once the state-ordered suspension is lifted July  15.  Activists had demanded a longer extension as so many are still out of work, but the Governor’s office just announced that there will be rental assistance.  As always, the devil in these assistance programs is in the details.  The assistance is really landlord assistance.

Elena H, a retired labor activist, describes the situation for many workers: “Small businesses get loans. If they force workers back to work in the height of pandemic, their loans turn into grants. Workers lose unemployment benefits if they don’t go back to what are very dangerous and unpredictable conditions for less money. Who has the power here? Consumers. You and me–even if we’re those workers. Do not patronize anything you don’t have to. Restaurants and bars are luxuries. Lives are at stake”  (June 22, Facebook).

But small businesses who receive the Paycheck Protection loan are also set up to fail, because they cannot re-open to their former capacity and still maintain safe social distancing.  Without full capacity enabling them to re-hire all staff, the loans don’t become grants but have Scrooge-like impossible repayment terms.  Under capitalism, none of us win.

This week, workers at two Fiat-Chrysler Auto plants refused to work under unsafe social distance conditions: Sterling Heights had a walk-out.  The UAW is reportedly trying to mediate the situation.

Speed-up on service workers continues.  Package delivery drivers literally run to my door and back to the truck before I can even shout “Thank you,” let alone offer a bottle of water.  In Michigan, unemployment payments have been on hold for over a month, due to a fraud investigation by the state.  Food distributions draw large crowds.

The nationwide defiance and resistance to social distancing is noticeably increasing.  Although younger people are becoming sick with COVID-19, except for Black Lives Matter protesters and people over 60, more and more people are not even carrying masks, let alone wearing them.  The defiance in Detroit is not related to the politicization of masks as a threat to “freedom” by Trump supporters, because there are very few Trump supporters here. Small businesses seem to fear offending customers and other customers are not demanding compliance.  Whatever the reason, it puts everyone at greater risk.

← Stop Nestlé’s water grab!
Why some statues must go →
This work is licensed under a Creative Commons Attribution-ShareAlike 4.0 International License