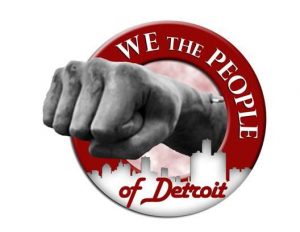 Detroit—A new book, Mapping the Water Crisis: The Dismantling of Black Neighborhoods in Detroit, and a film, Detroit Minds Dying, present stunning data about the massive number of Detroit households experiencing water shutoffs and their concentration in neighborhoods of color and poverty, and find the roots of the shutoffs in state emergency management. Significantly, both book and film document the impact a coalition of activists can make on the crisis.

Mapping the Water Crisis was developed as a collaborative, community-based project by We the People of Detroit, a coalition of activists who contacted researchers around the nation. We the People of Detroit is engaged in an ongoing struggle and has used a disproportionate share of its resources to obtain records from the Detroit Water and Sewerage Department.

Their research contradicts the popular wisdom that Detroit residents simply refuse to pay their water bills—among the highest in the nation—and that the city overcharges suburbanites to subsidize them. In fact, the city sells water at reduced rates to other communities, which then add surcharges, some quite substantial. The researchers also conclude that infrastructure built and paid for by the City of Detroit during the 20th century is what facilitated the growth of the suburbs—and the depopulation of the city.

The film Detroit Minds Dying shows disabled residents standing in long lines outside payment centers, and a Water Department spokeswoman arguing that payment plans are offered to all who need them. But more than half the payment agreements are in default because residents cannot afford them. The arrears become liens on their property taxes and contribute to the huge number of foreclosed residences in the city, disrupting families and blighting neighborhoods. The spokeswoman dodged a question about the Water Affordability Plan promulgated by the UN: Water rates should be no more than 3% of income. Many Detroit residents are billed up to 10% of their income.

The most important point emerging from the research is the work of activists resisting state-imposed emergency management and pace of residential water shut-offs. The coalition’s philosophy, “water is a human right,” opposes current policies based on the race and class of water customers.

The activists are in the process of establishing a water testing program and have pressured the authorities to develop water bill assistance programs. They also will be publishing a “map” of water activism. For further information: Mapping the Water Crisis https://wethepeopleofdetroit.com/2016/08/18/in-case-you-missed-it/ and detroitmindsdying.org.

← From the writings of Raya Dunayevskaya: Nigeria: a retreat, not a victory
Kaepernick sit-down ‘bigger than football’ →
This work is licensed under a Creative Commons Attribution-ShareAlike 4.0 International License