Detroit—”Make Detroit the Engine of a Green New Deal” was the unifying cry for over 2,000 people who rallied in Detroit to send a message of environmental justice to the July 30 Democratic presidential candidates’ debate held here. Surprise! Surprise! The mainstream media was glaringly absent.

A wide range of organizations—including about 50 teenaged young people from a Jewish day camp, Extinction Rebellion of SW Michigan, the Sunrise Movement and the Michigan League of Conservation Voters—brought people out. Petitions for a ballot initiative to ban fracking in Michigan were circulated—AGAIN—because last year the state Republican administration had rejected it, and the new Democratic administration is not fighting to overturn that rejection. 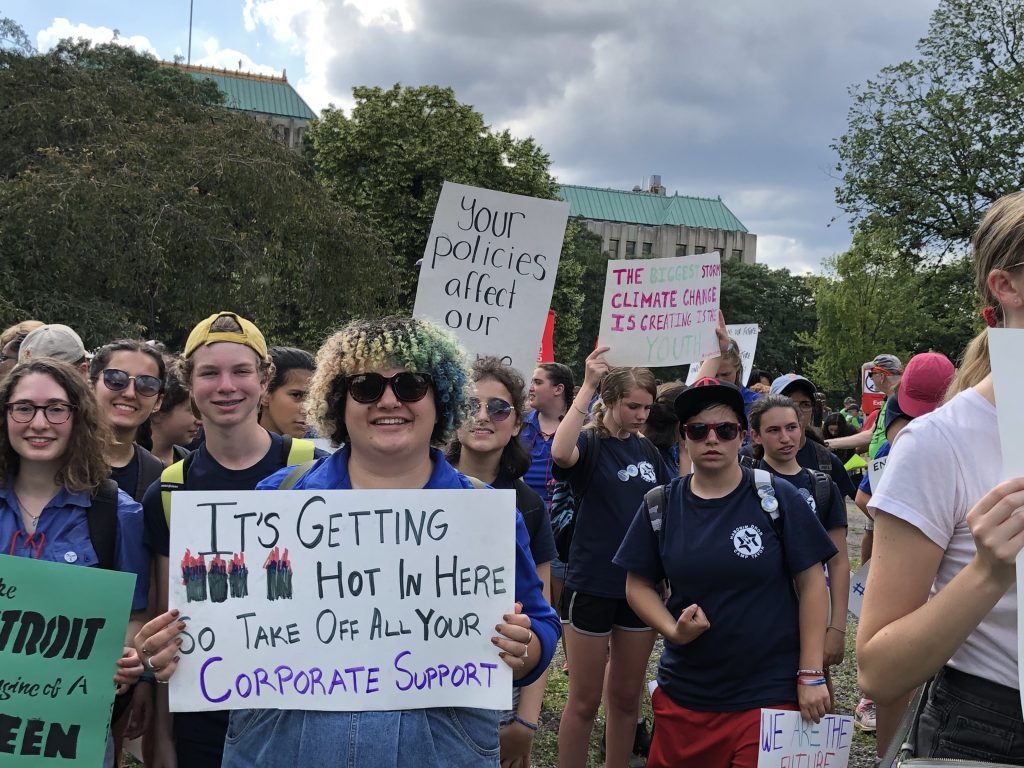 Holding hand-made sings proclaiming, “The BIGGEST storm climate change is creating is the YOUTH” and “It’s getting hot in here, so take off all your corporate support,” Detroit youth greet the Democratic presidential candidates. Photo: Susan Van Gelder for News & Letters.

The largest contingent came from SEIU Local 73, which represents, among others, building maintenance workers. Their leaders who spoke linked the “Fight for Fifteen” to the quality of life for all human beings on the planet.

The rally included poetry, music and speeches. A Chippewa (Ojibway) elder said, “Guaranteed food, education, medical services…you can’t have any of that in a good way unless you have clean water, clean air, healthy land to live on. You can’t grow healthy food on contaminated land…[I]n our traditional teachings, we have a ‘medicine wheel.’ The center represents balance and harmony with nature…Right now, humans are collectively pretty far away from that center.…”

Water warrior Monica Lewis-Patrick led the crowd in an impassioned denunciation of government policies and indifference to human beings which created the polluted water in Flint, Mich., and its ongoing harm to Flint’s children’s health.

Darryl, an organizer of the demonstration, stated, “Right now the idea of a Green New Deal is an empty box and it is up to us to fill it.” From the socially, geographically and ideologically diverse crowd in attendance, it was clear that a variety of ideas and activities would be promoted. For Marxist-Humanists the choice will be to support and develop those concepts and actions that foster a society based on human needs; not those that fall within capitalism’s framework.

← Idle No More in San Francisco
San Francisco is dangerous for youth →
This work is licensed under a Creative Commons Attribution-ShareAlike 4.0 International License