Queens, New York–The first story was that Eric Garner had died of a heart attack in the ambulance as he was being taken to the hospital. Segments of the New York press were happy to report that the heart attack was probably caused by his obesity and diabetes, letting the cops off the hook. People who saw the video saw something different. They saw a motionless man lying on his side with his eyes closed while cops and EMT personnel did little or nothing.

Now we know that the first story was false. The coroner’s office ruled that Eric Garner was murdered, dead before he was put into the ambulance. The medical examiner ruled that Officer Pantaleo’s chokehold caused Garner’s death. His videotaped arrest and final pleas of “I can’t breathe!” sparked outrage in poor and working-class neighborhoods all over the city.

As we go to press there have still been no indictments of the cops responsible for Garner’s death. According to The New York Times, the District Attorney in Staten Island is afraid that the pro-police force cop-heavy population of Staten Island will find the cops innocent. So he is holding off on any indictments.

The cops have weighed in too. According to Patrolmen’s Benevolent Association president Pat Lynch at a press conference directed at “police haters,” he said that Garner“was a big man who had to be brought to the ground to be placed under arrest by shorter police officers.” “It was not a chokehold,” according to Lynch.

Other people see things differently. Sherrilyn Ifill, president of the NAACP Legal Defense and Educational Fund, stated, “The police officers involved in this homicide must be held accountable for Mr. Garner’s death and prosecuted to the fullest extent of the law.”

ANOTHER UNARMED BLACK YOUTH GUNNED DOWN 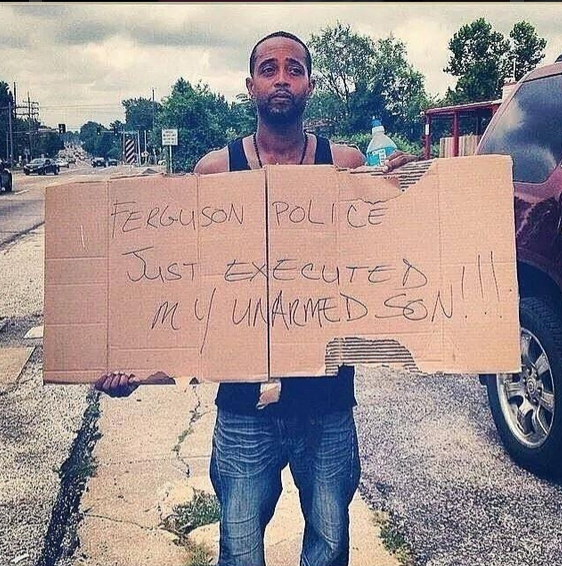 In a case which makes clear the pattern of police violence against Black people, especially young Black men, in Ferguson, Mo., a predominantly Black suburb of St. Louis, police shot and killed unarmed 18-year-old Michael Brown. After a struggle in a patrol car that spilled into the street, Brown was shot multiple times.

St. Louis County Police Chief Jon Belmar said the exact number of shots wasn’t known, but “it was more than just a couple.” He also said all shell casings found at the scene matched the officer’s gun. Police are still investigating why the officer shot Brown.

After Brown’s body was left in the street for several hours in the hot sun, several hundred protesters gathered outside Ferguson Police headquarters. Many of them marched into an adjacent police building chanting “Don’t shoot me” while protesters outside chanted “No justice, no peace” and “We want answers.”

Relatives have said that Brown was a 2014 Normandy High School graduate who was to begin classes at Vatterott College on Aug. 11. At a protest on the day after the murder, community residents expressed outrage over the official police story that Brown had been shot while trying to take the pistol away from the cop, noting that Brown was 35 feet away from the police car when he was gunned down.

At a candlelight vigil on the evening of Aug. 10, the heightened tensions between the police and the African-American community were clear. A crowd of thousands on streets near the scene of the shooting chanted “No justice, no peace.” They were met by hundreds of police officers in riot gear. Mr. Brown’s mother, Lesley McSpadden, told reporters, “You took my son away from me. Do you know how hard it was for me to get him to stay in school and graduate? You know how many Black men graduate? Not many. Because you bring them down to this type of level, where they feel like they don’t got nothing to live for anyway. ‘They’re going to try to take me out anyway.’”

← Stop Israel’s war on Gaza: the need for revolution in life and thought
Photos from National Moment of Silence, Chicago →
This work is licensed under a Creative Commons Attribution-ShareAlike 4.0 International License