Raleigh, N.C.—North Carolina’s House Bill 2 (HB2)—passed in a special 12-hour session March 23 at the cost of 42,000 taxpayer dollars—has been dubbed one of the most anti-LGBTQ laws to ever hit the books in our country. Not only does this bill have staggering consequences for LGBTQ North Carolinians in the form of discrimination, it also puts those who are forced to use public restrooms of the gender on their birth certificate and not the one they identify as at risk of being put into a dangerous situation. A bearded and decidedly cis-looking Trans man posted a picture of himself on Twitter and tweeted Gov. Pat McCrory that the Governor just made it mandatory for him to share a bathroom with the Governor’s wife. HB2 makes discrimination against LGBTQ people in our communities legal. It was a hasty response to an ordinance passed in Charlotte, N.C., set to go into effect on April 1 that provided protections from discrimination on the basis of sexual orientation, gender identity, and family status. The ordinance in Charlotte also allowed people to use the restroom of the gender with which they identify.

Trans and LGBQ people—emboldened by a powerful showing of thousands of young leaders of many races—have taken to the streets with a call: “It’s time to escalate.” Over 1,000 of us showed up outside Gov. McCrory’s mansion in Raleigh the day the General Assembly sent him the bill. McCrory signed it into law in the wee hours of the night. Five Trans or Queer people were arrested in a powerful act of civil disobedience.

We chanted, “If we don’t get no justice, you don’t get no peace,” “I believe that we will win,” “We are more than pink or blue,” and held signs like “We are not this NC,” and “Which bathroom do we use when we’re pissed?” and “Pat, you’re being a dick.” On March 29, thousands of students blocked a main intersection in Chapel Hill, N.C., home to UNC-CH, in what one long-time activist said was the largest student demonstration in the city in over 50 years.

Two Transgender people and a Lesbian working with several civil liberties groups filed a lawsuit on March 27 challenging the constitutionality of HB2. 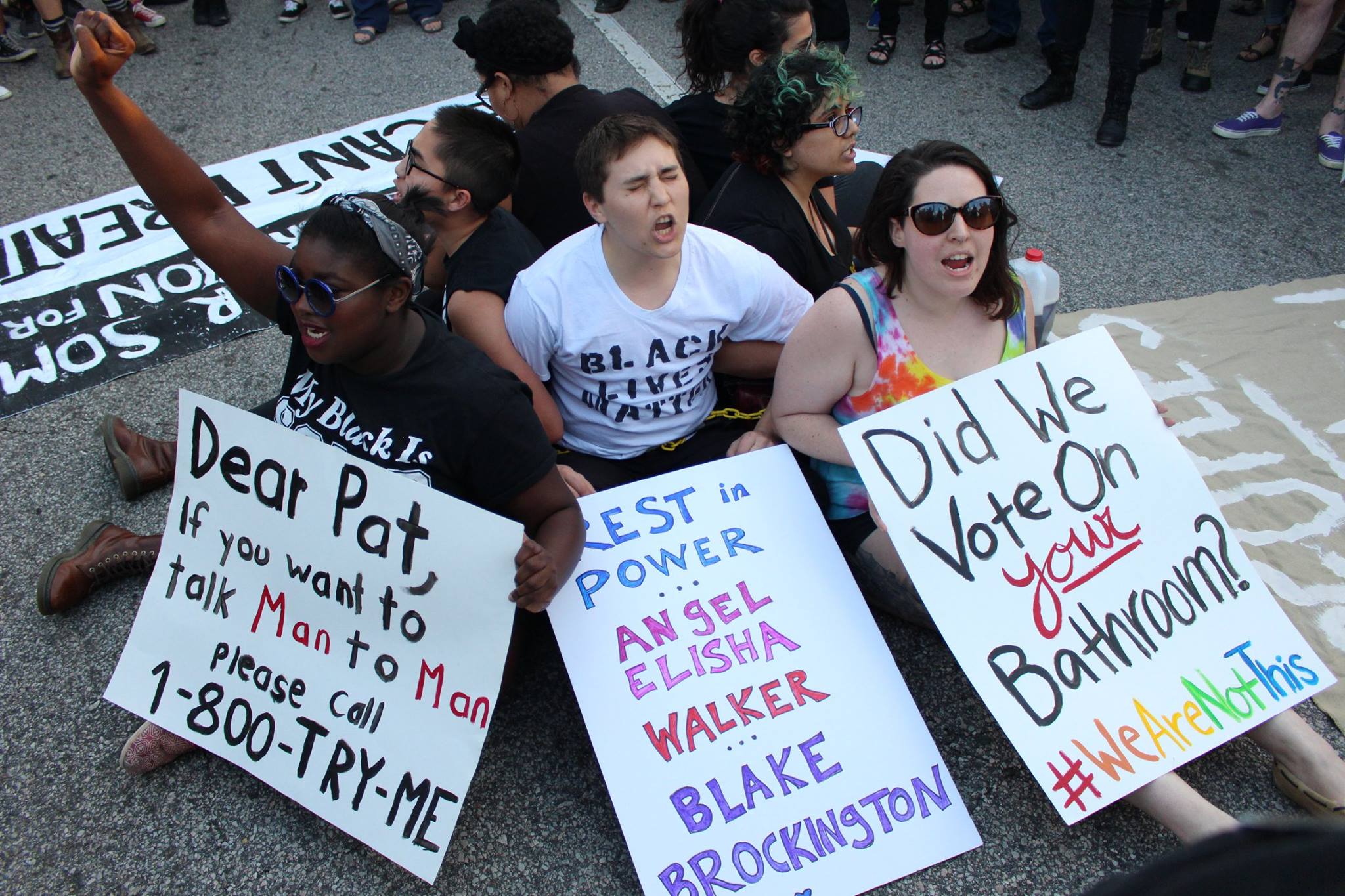 From the March 24, 2016, protest. Those pictured include people arrested for chaining themselves in the street. Photo by Ethan Cicero.

HB2 puts children over seven at increased risk by making it illegal for them to accompany their caregivers into an opposite sex bathroom, forcing parents to choose between leaving their child outside the restroom or breaking the law. The bill criminalizes Transgender North Carolinians who simply want to use the bathroom in peace. This is ridiculous.

By requiring discrimination in school bathrooms and locker rooms, HB2 makes schools less safe for Transgender students and places $4 billion in desperately needed federal education funding at risk because the discrimination is a violation of Title IX.

The bill overrides local laws passed to protect LGBTQ people from discrimination in wages, employment, and services and undermines the authority of local communities to pass laws reflecting their values, such as the ability to decide on the minimum wage.

North Carolina is now the only state other than Mississippi that provides no state protections to workers whose employers fire them for any discriminatory reason, including race, sex, age, religion, color, or national origin. This harms all working North Carolinians and their families.

HB2 harms family economic security by restricting the ability of local governments to raise wages and ensure basic job standards in their communities. This hobbles local efforts to address shortfalls in state law regarding workers’ rights and wages and places workers at greater risk.

More than 80 major businesses and CEOs, including Apple, Red Hat, Google, Lowe’s, American Airlines, Facebook, and many more have spoken out against HB2. Filmmaker Rob Reiner said he wouldn’t make movies in N.C. until the bill is repealed. The N.C. Attorney General himself said that he would not defend the “national embarrassment” of HB2 in court.

The Hurricanes, the state’s ice hockey team, issued a statement criticizing HB2, and the NBA said it may reconsider hosting the 2017 All Star game in North Carolina.

← ‘Leaderful’ movements
II. The worldwide war against women →
This work is licensed under a Creative Commons Attribution-ShareAlike 4.0 International License