I saw the demonstrators marching through my neighborhood from my window and ran down in my nightgown and mask to join them. Thousands of protesters have taken to the streets in many cities since the murder of George Floyd in Minneapolis. These protests go deeper than Floyd’s murder. They expose the lies and hypocrisy and make explicit the slogans, “We are all in this together” and “We are one,” that have been thrown around since the COVID-19 outbreak. Here in Chicago one young Black protester said to me, “If we are ‘one,’ we too could be murdered by the police. Black people are fighting for the right to exist.” One elderly white couple held up a beaten-up sign that said, “We will not forget.” The woman told me, “We marched against this over 50 years ago. We held up this same sign then. What does it mean that we are here again? We need permanent change.”

June 3 began with people calling and texting Detroit city officials saying: Release Tristan Taylor from jail and drop the incite to riot charge. By 2:00 PM Tristan was released and the incite charge was dropped. The June 4 march was bigger than the day before and character-changing, some think. People kept marching and when curfew hit at 8:00 PM about 500 people remained in protest and ready to face cops and arrest. Then Mayor Mike Duggan with police Chief James Craig said enforcing the curfew was “optional” and decided not to enforce it. Many people stayed in the street and folks in neighborhoods were watching it all. People in the march celebrated. It was a good day in Detroit.

This report from my favorite cousin, a conservative Catholic and never an activist, on a protest march in my hometown of Morgantown, W. Va., was evidence to me that the murder of George Floyd is an historic turning point: “I got stuck in a very well organized and peaceful demonstration in downtown Morgantown. I sat in my car on High Street for probably 25 minutes and just watched. Basketball and football players demonstrated along with coaches, and lots of white people too. They had bullhorns and I listened to two of the speakers. They were both African American and were trying to stress the importance of Black people voting to get things changed. There have been demonstrations all over our state for two days and not one arrest.”

I’m no expert at crowd estimates, but the entire courtyard of the Memphis, Tenn., Civil Rights Museum, the street, and the park across from the museum were all filled with people gathered for training in nonviolent civil disobedience on June 4. Organized and led by The Coalition of Concerned Citizens (CCC), the evening was filled with good information, inspiring meditations, and encouragement to participate in community organizations seeking justice through a variety of means. Please note that Memphis Mayor Loeb/Strickland refuses to meet with the leaders of CCC, and leaders of the Memphis Interfaith Coalition for Action and Hope, among others, but instead staged a photo-op event on June 3 with someone handpicked by the Mayor. This is no way to fulfill the responsibilities of political leadership. Congrats to the organizers of the training session for continuing to act for the well-being of all of us in Memphis.

A week or so ago the owner of several downtown Tampa, Fla., restaurants which target entertainment to a sizable Black clientele posted on social media “shoot them all.” When a woman asked “Who? The cops? The protesters?” she got no reply. She then put his post on blast. A protest in front of one of the restaurants was organized the next day. About 300 people came out for several hours. The police were a block away but did not confront the demonstrators. Meanwhile, numerous reports of sex discrimination in his businesses, date rape drugs he put into girls’ drinks and then raped them, and other abuses emerged on social media. But the owner, Franco, proceeded to text his staff at one location: “Don’t accept [N-word] money tonight.” As Charles Denby wrote in Indignant Heart: A Black Worker’s Journal, “Few can look upon a calm sea and know when a storm will sweep all filth to the shore.”

The School Board in Chicago, appointed by the Mayor, voted 4-3 on June 24 to keep 200 Chicago cops stationed in public schools, instead of reallocating the $33 million they drain from kids’ learning into the nurses and counselors that so many schools are missing. Their decision was no surprise after Mayor Lightfoot voiced her opposition to removing cops—the surprise was that all three women on the School Board listened to teachers, students, parents and protesters and voted against the Mayor’s wishes.

Who do these people think they are who used a no-knock warrant to bust into someone’s house in the middle of the night in plain clothes and then—when one of the people they’ve scared out of their minds fights back—murder another, as they did to Breonna Taylor? What kind of world do we live in where we give these people (mostly white men) such power and weapons? And to engage at that level when there is no imminent threat, no violence occurring except what they themselves have created. It’s enraging. They’re like the worst gang and paramilitary force combined. I imagine they’re kind of like the Taliban. It is madness.

It’s not about good or bad cops. They are all human beings, some with more humanity and integrity than others. It’s about an economic system that thrives on inequalities. Only social inequalities guarantee profit. The police/military were created to protect aristocracies from the hungry, and to promote their agendas. There are new forms of aristocracy in the world now. The U.S. began as an empire divided by class, race, and gender. It continues as one. An empire will always confront the resistance, despair, intelligence, and rage of the less powerful. Sometimes there will be more abundance, therefore less rage. Other times there will be more hunger, anger, and fear. The police are here to control us. They will be hiring more people, they will be training them in their death-oriented philosophy.

The cops in Miami showed how they regard the citizens as cannon fodder on Dec. 4, as they gleefully played “cowboys and Indians” with the jewelry store robbers while using innocent citizens in their cars as human shields. The Miami cops are typical of cops nationwide. They are not “officer friendlies.” They protect the rich and their main job is to make as many arrests as possible to keep that street-to-court-to-prison pipeline full.

Under the impact of Black mass revolt, the Associated Press has finally decided to capitalize “Black” when talking about people—half a century after N&L did. That’s good, but their justification is incoherent. The principle that should be followed is the recognition of Subjects of revolution, which is why N&L capitalizes words such as Indigenous, Gay and Women’s Liberation.

Because of George Floyd’s murder by a Minneapolis cop taking a knee on his neck, New Orleans Saints quarterback Drew Brees was asked about Colin Kaepernick taking a knee to protest police violence against Blacks. He evaded the question as he and so many other football players and NFL owners have for three years, by pretending it was disrespectful to the troops. But times have changed since the three years that Kaepernick has been blacklisted. Within a day the outcry from fellow athletes, fans and the public forced Brees to issue an apology claiming he hadn’t understood the issue. Even NFL Commissioner Roger Goodell, who oversaw all 30 teams denying Kaepernick a job, added his own apology. It is no commentary on the sincerity of either apology to point out they knew their old answers would no longer work. 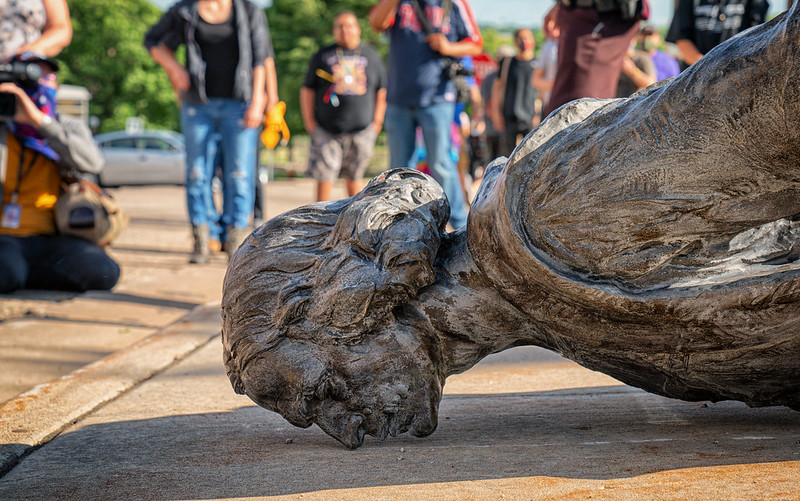 Christopher Columbus statue outside the State Capitol in St. Paul, Minn., after a group led by American Indian Movement members tore it down on June 10. Photo by Tony Webster.

It astounds me that in New York Gov. Cuomo and Mayor de Blasio are defending the statue of Christopher Columbus towering over Central Park, even as monuments to other slave traders and pedophiles have been toppled after George Floyd’s murder. If they are fearful of disloyalty to their Italian ancestry, then pick an Italian American. Some would suggest replacing Columbus with labor martyrs Sacco and Vanzetti, but even Yogi Berra would do. I’m no Yankees fan, but one pearl of wisdom from Yogi is made for our COVID-19 quarantine and “OPEN IT UP” times: “Nobody goes to that restaurant any more, it’s too crowded.”

REVOLT: WHERE TO NOW?

The outpouring of grief and anger in the USA is welcomed as it shows the spontaneous movement of the masses. However it would have been more effective if there had been a general strike. The problem here however is that while the consciousness of the masses are rebellious this has to translate into a revolutionary Marxist consciousness that places self-awareness of workers to replace capitalism with a socialist society not only in the USA but globally. A huge task but it still needs to be done to stop humanity descending into a state of barbarism.

One of the many Black Lives Matter demonstrations in Detroit, this one on June 29, 2020. Photo by Susan Van Gelder for News & Letters.

The violence against police, the rioting, the looting and the arson during the protests over the police murder of Mr. George Floyd are a reflection in a mirror held up by the dispossessed, the marginalized, the vulnerable minorities to this violent, racist, sexist, ageist, corrupt, outmoded system—capitalism—that we exist under. The hypocritical capitalist politicians and media are blinded by their servitude to mammon. While they condemn violence and looting, sermonizing that it detracts from the message of “justice for George,” they are in accord with centuries of violence and oppression against Black people and other minorities. That the death of one person could set off such mass protests across the entire planet is a measure of the fragility of the dying capitalist system. It is like a patient with COVID-19 in the ICU.

I do caution as a healthcare worker, that it can be dangerous to consider this pandemic as a war. That discourse is used to rationalize our suffering, martyrdom and death. Healthcare should be focused on care and healing, the opposite of war.

Currently workers have difficulties surviving in spite of the extra money that people on unemployment can get, unless they still “could” work. In the states that have returned to work, workers have not been able to get unemployment as long as a job is available to them. I’m an essential worker at a mental health agency working with people escaping/healing from domestic violence. Most of my coworkers make minimum wage. A couple people left at the beginning of the pandemic because they were working very hard and receiving so little money it was too much for them. Most of us are exposed to people living on the street. I work with people that have been in shelter for a few months. The frustration is that they all had plans to keep moving on with their lives. People are feeling frustrated and overcome with despair. It’s hard to keep their spirits high. I’m grateful to have a job. I can’t quit. If I wanted to take a break, it would be an unpaid furlough.

← Readers’ views: July-August 2020, part 2
From the writings of Raya Dunayevskaya: From Black mass revolt to Freedom →
This work is licensed under a Creative Commons Attribution-ShareAlike 4.0 International License