Mass mobilizations in D.C. to follow the massive Jan. 21 Women’s March on Washington include a March for Science and teach-in on Earth Day, April 22. More than 300 satellite marches are expected across the world. The official call begins:

“The March for Science is a celebration of our passion for science and a call to support and safeguard the scientific community. Recent policy changes have caused heightened worry among scientists, and the incredible and immediate outpouring of support has made clear that these concerns are also shared by hundreds of thousands of people around the world.

“The mischaracterization of science as a partisan issue, which has given policymakers permission to reject overwhelming evidence, is a critical and urgent matter.”

Scientists have already rallied in San Francisco and Boston against President Donald Trump’s attacks on science and scientists.

The Trump administration immediately eliminated all information about climate change from the White House website, except for a vow to get rid of President Obama’s Climate Action Plan. Websites of various Departments were scrubbed too, and the new bosses tried to gag scientists, regulators and others working for the executive branch. 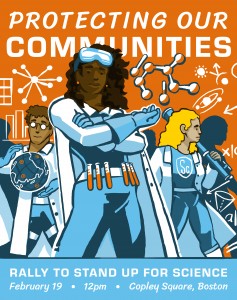 When Badlands National Park continued to post facts about climate change, the tweets were deleted. People associated with Badlands and other agencies set up 65 unofficial Twitter accounts to resist Trump and publish facts on climate, the environment, and the 1940s internment of Japanese Americans.

The fear that the new administration may try to destroy scientific data spurred hundreds of volunteers to engage in “data rescue,” copying environmental data from government websites to servers out of the administration’s reach.

The fears are also based on Trump’s “Cabinet of deniers,” including Secretary of State Rex Tillerson, in charge of ExxonMobil while it was funding climate change denial—despite its own scientists’ awareness in the 1970s that climate change was under way.

Trump’s allies want to eliminate government funding for climate research, starting with NASA and the EPA, and for international programs dealing with climate change.

They assault the public with anti-science propaganda, including climate denial and creationism taught in schools. But since they need science for capitalism’s productivity, profits and weapons, they want it to be the private property of corporations and the military.

The call for the March for Science poses it as a beginning, and envisages “continuing to celebrate and defend science at all levels—from local schools to federal agencies—throughout the world.” Scientists agree on the demand for all to “listen to evidence,” but are debating whether this is “a political protest.”

NO TO SCIENCE AS TOOL OF FASCISM

The newly formed “Scientists Against A Fascist Establishment” issued a statement refuting the idea that science is ever not political. It declared, in part:

“It is not up for debate; science can be, and has been, used as a tool of fascism, of active oppression. We must take an early and unequivocal stance: We will not let this happen, even if it means much of our funding is lost.”