Editor’s note: Below we print an excerpt from part 2 of “Shared Journey inside the Tombs of California’s Solitary Confinement Torture Chambers” by Baridi “X” Williamson.

I went inside my heart to survive the torture

When I entered this California branch of the New Jim Crow system of mass incarceration thirty-two years ago, there was nothing in my mind that could have prepared me for the torturous ordeal that awaited my arrival to this prison station along my life’s journey—especially the last 20-plus years of being buried alive in the state government’s solitary confinement torture prison tombs.

It was the clear insight that was shared by a Freedom Fighter named George Jackson, who tells us in his internationally-acclaimed publication that “It takes some serious psychological adjustments to deal with prison life.” (Soledad Brother.)

There I was staring this inhumane, cruel and torturous ‘creature’ in its face, as I entered that strange man-made diabolical construct called “Pelican Bay SHU” in the early 1990s. And just as Jackson said, “Nothing can prepare you for this.” In January, 1995 U.S. federal court Judge Thelton Henderson described the conditions behind the Pelican Bay SHU walls: 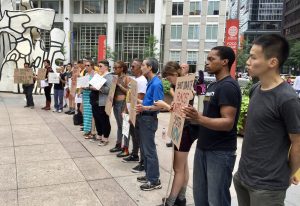 Sept. 9 demonstration in Chicago in support of National Prison Strike.

“The Prison setting at Pelican Bay SHU offers a tremendous potential for abuse by guards who have powerful weapons and enormous manpower at their disposal and exercise nearly total control over the inmates under their supervision.

“Adding to this volatile mix is the fact that the prison setting of the SHU is far removed from the usual sights and sounds of everyday life. From the outside, the SHU resembles a massive bunker; from the inside, it is a windowless labyrinth of cells and walls, sealed off from the outside world by walls, gates and guards. The physical environment thus reinforces a sense of isolation and detachment from the outside world and helps create ‘palpable distance from ordinary compunctions, inhibitions, and community norms.’ (Madrid v. Gomez, 889 Fed. Supp. 1146.)”

It was only after the historic California Hunger Strikes (2011-2013) that we were able to finally break through CDCr’s secret redwood (Del Norte County/Crescent City) curtain wall of lies that hides their torture. But by then, the damage of Post Traumatic Stress Disorder—Solitary Confinement had already been done. This is why it is taking some of us so long to try to share with you—the Outside World Humynity—what we just experienced. It is the trauma that we must face, to grasp and expose to you.