Washington, D.C.—More than 200 protesters from the Syrian and Iranian diaspora and solidarity activists braved the bitter cold and post-holiday disarray to stage a joint protest in front of the White House on Jan. 6 to demand an end to the Bashar al-Assad dictatorship and the Iranian theocracy.

Waving the flags and chanting the slogan of opposition movements from both countries, our gathering was a spirited, but shivering, patch of color against the drab, wintry landscape of the Trump regime’s palace.

Together we demanded an end to the bombing and sieges of Free Syrians in East Ghouta, Idlib and other opposition-held areas; a rejection of the Vladimir Putin-led “negotiations” farce being held at Sochi to entrench Bashar al-Assad’s rule; an end to the Khamenei-Rouhani clerical regime of Iran; and the release of political prisoners in both Syria and Iran, where recent protests led by the working class in rural areas have grown into sustained nationwide demonstrations, met by brutal repression and thousands of new arrests. 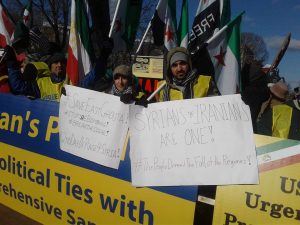 Our rally grew out of a decision to merge two separate initiatives—the global call for a #2ndDayofRage4Syria by our Anti-War Committees in Solidarity with the Struggles for Self-Determination (AWCs) in collaboration with East Ghouta activists, and the Rally to Support #IranProtests, hosted by the Organization of Iranian-American Communities (OIAC), whose members have been active supporters of Syrian-American solidarity work for years. It would have been counter-productive to hold back-to-back rallies with the same participants, so we agreed to merge the two efforts.

However, this joint effort was not without complications. Most notably, after it was agreed and publicized, the Iranian organizer informed the Syrian solidarity activists that the neoconservative Republican politician Newt Gingrich had been invited to speak at the rally! Obviously, we made our opposition clear to our Iranian counterparts but were informed they viewed any support for the legitimate struggles of Iranians as welcome.

This, and some of the Iranian chants for People’s Mujahadeen (MEK) leader Maryam Rajavi, and slogans (“We demand regime change”), are a challenge for leftists engaged in solidarity work with the Syrian and Iranian diaspora, as the MEK is the dominant force in many Iranian diaspora communities. Without getting into the complexities of the MEK’s history, suffice it to say it is far more influential in the Iranian diaspora than in Iran itself. But until a more clearly principled and deeply rooted Iranian diaspora grouping makes an appearance as an actual organizing force, both Syrians and their allies have to contend with their dominance–or withdraw from solidarity efforts.

Fortunately, even though Gingrich drew the attention of Fox News, few protesters stopped to listen as he droned on. Most of us were too busy making contact with fellow activists and handing out flyers. I shared a dual-flyer combo, for both Syria and Iran, featuring an AWCs flyer, a statement from East Ghouta activists, a call to action by the Haft Tappeh Sugarcane Factory Workers in Iran, and a solidarity petition demanding freedom for student activists arrested in the protests. Both were well-received.

The #2ndDayofRage4Syria carried on elsewhere as planned the next day with notable success, given the small size of our organizing team, with Syrians and friends raising the banner of a #FreeSyria in at least 16 different locations across the world, from Chicago and NYC to Belgium, and most outstandingly even Moscow, right in the heart of Putin’s Russia.

← #2ndDayofRage4Syria in Chicago
In Memoriam: Narihiko Ito (1931-2017) →
This work is licensed under a Creative Commons Attribution-ShareAlike 4.0 International License