Detroit—Does housing in Detroit in 2017 mean large tracts of vacant land and substandard houses ripe for development and easy slumlord profit, or a focus for community organizing to take back our city? Capitalism drives the first view, but what philosophy guides the vision for recreating?

Downtown development, widely described as “Detroit is coming back,” has not reached most of the 139 square miles of the city. Losses of population, industry and jobs since the 1950s, and foreclosures since the Great Recession, have destroyed a third of decent-quality homes built between 1910 and 1960. 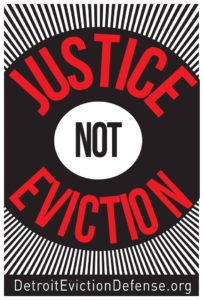 Recently Detroit Eviction Defense led a team of community members, UAW volunteers, and professors and students from the University of Michigan Dearborn to conduct action research in a square mile neighborhood in Northwest Detroit. The team asked renters if they had landlords not paying property taxes or doing repairs on the houses. They identified owners of multiple properties with a pattern of slumlord behavior. They invited renters and homeowners with housing problems to a workshop where lawyers and housing experts from the United Community Housing Coalition assisted them.

“We are asked to believe that there are no alternatives, and that the present prioritization of wealthy developers’ ability to make profit over residents’ ability to remain in Detroit is…not only inevitable but correct.

“We assert, however, that there are many alternatives…We will continue to organize for a Detroit that remains majority African American; that practices development without displacement; that facilitates community control of land and permanently affordable housing; that is governed by its people and for the benefit of all of its people, especially those with the greatest need. Detroit…is a people, a culture and a history. It cannot and does not deserve to move forward without those who have labored and planted our lives here.”

pouring into downtown. To realize it would mean a revolutionary change in all areas—social, economic, racial. Yet the solution proposed by the Detroit People’s Platform is hardly revolutionary, let alone realistic.

They propose “creating a fully-funded housing trust fund with dedicated revenue for the creation, preservation or operations of permanently affordable housing…for those making $20,070 or less each year.”

Who has the money for such a fund? Developers! We already know what they want. A housing trust fund that is a “mechanism to grow the pie for everyone’s benefit” is not only a pipe dream but also makes no changes to the social dynamics that created the problem for the past 70 years.