Chicago—On the first day of the third Global Climate Strike, Sept. 20, thousands of people, mostly teenagers, marched to the Loop and rallied. Across the world, four million people participated—the biggest climate action ever. newsandletters.org was one of 7,371 websites that observed the Digital Climate Strike. The events, 5,800 actions in 163 countries, continued with 2.7 million more people in various places for a week, before and after the UN’s Climate Action Summit on Sept. 23, culminating in a Sept. 27 Earth General Strike. 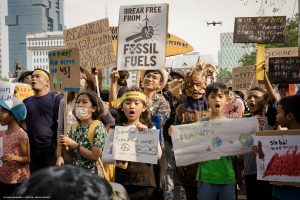 Hearing the chants dominated by children’s voices was quite moving. So was seeing so many very young people coming out in all seriousness to call for a drastic social transformation to save their future and the future of humanity from the climate and extinction catastrophe. We are already living through its early stages, and it will grow much worse if business as usual is allowed to steamroll on.

As we rallied, six named tropical cyclones were swirling in the Atlantic and Eastern Pacific—tying a modern record. One, Hurricane Humberto, had brushed the Bahamas a week earlier—complicating its recovery from the disaster wrought by Hurricane Dorian—and then subjected Bermuda to hurricane-force winds. Another, Tropical Storm Imelda, dumped more than 40 inches of rain on parts of Texas, causing catastrophic flooding, much of it in places flooded by Hurricane Harvey two years ago; Imelda and Harvey both broke rainfall records. More and more intense hurricanes and cyclone-caused flooding can be expected with global warming.

This was no trick of brilliant scheduling for the climate strike, since every week brings a new climate disaster, according to a recent UN report.

The difficulties in store for the movement are shown by the fact that in China, the country where the largest amount of greenhouse gases is currently being emitted, no strike was allowed to happen. That is not for lack of concern by the youth, as in 16-year-old Howey Ou’s solitary climate strike in Guilin earlier this year until the police forced her to stop. The Communist Party tightly controls information, portraying leader Xi Jinping as constructing an “ecological civilization” and making the country a climate leader, while stamping out reports of pollution and the effects of the continuing massive burning of coal and construction of more coal-fired power plants abroad. The government has even set up its own “China Youth Climate Action Network,” whose line is that youth need to “work with” the government rather than protest.

The difficulties are seen as well in the West. Countries like the U.S.—which has emitted the greatest amount of greenhouse gases cumulatively—Australia and Brazil are controlled by entrenched capitalist minorities that undermine science, spread lies, and double down on deforestation and fossil fuel production, export and consumption, while slashing environmental regulations. Canada and European countries with greener images talk a good game while pushing production and use of coal and tar sands oil.

That is why the youth are saying, we don’t want to hear you talk about climate. We want to see real action. Sixteen-year-old Swedish climate strike pioneer Greta Thunberg told the U.S. Congress:

At the same time, there is a great stirring of ideas around what deep social problems have prevented real action from happening, and what kind of social transformation is needed to set humanity on a new track. That stirring of ideas has been intensified by the massive activity and the questions the youth have been raising. Both the mass activities and the ferment of ideas will continue to grow.

Chicago—I’m here because I’m thinking about all of humanity. We don’t need to destroy people’s lands and force them to become climate refugees, although we should welcome them with open arms and stand up against racism or xenophobia. Some places are already uninhabitable. It scares me. It’s happening now. I am just amazed that people choose profit over human lives. I need to stand up for my future. I want to feel comfortable having a family and being assured that they will live on a safe earth.

I’ve never done anything like this. There’s something sublime about it. It’s powerful. I’ve known about the climate strike and Greta Thunberg for six months or so, from seeing the news. It’s really exciting. The community here is great. And so many people. I hear that millions and millions of people are striking.

Chicago—I’m here because I care deeply about the environment and I try to do my part. I thought it was not only a good thing, not only something I wanted to do, but a responsibility to be here.

I’m 29 years old. I started learning about global warming around 2000. Later, I was struck by Al Gore’s documentary An Inconvenient Truth. I remember learning about the destruction of rainforests and the polar ice cap melting. What really tugged at my heartstrings were the animals dying due to global warming. What really gets me is the humanitarian crisis of people and animals. We share this earth. I think we should all put this together in a more habitable way.

I remember that iconic image of the polar bear so happy and drinking a coke. Seeing documentaries about polar bears swimming with nowhere to get out of the water, dying, felt like a metaphor for my innocent worldview being disillusioned or deferred.

Chicago—I feel called to action because I’m a younger person, and I’ll be feeling the effects more than the older people who attempt to stop mitigation efforts. Last year, I did a majority of my projects on climate change efforts and climate change effects from large industries, such as the hotel industry, which is a very big contributor to domestic landfills and other pollution. It intensifies as my interest grows, and I’m ready to do something about it. 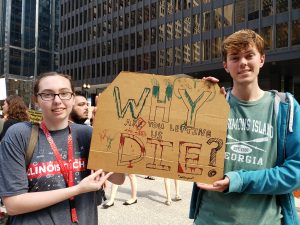 Youth at the Chicago Climate strike demonstration, Sept. 20, 2019. Their sign reads: Why Are You Letting Us Die!” Photo by Terry Moon for News & Letters.

I am 18. I don’t do as much as I could. I don’t have a whole lot of freedom in terms of my time and scheduling. I use the least amount of plastic I can. I haven’t used straws for a year. I was about 16 when I started being active. Obviously, in the last two years, there’s been a whole lot more coverage, which is why there’s way more people here than before.

Estimations that we achieve a point of no return by 2045 or 2050, are concerning a lot of Generation Z people. We are unable to grasp the full gravity, because we’re young and we have other stuff that we’re trying to deal with as growing people in America.

Everyone is starting to feel a lot more unified. This is a central issue. It makes me happy that there are so many people. People are going to stop and hear the message and take it to heart. There are all these people that are not only doing it for each other, like everyone here at the rally, but also for people who are going to be reporting on this that will also get the message that everyone wants conveyed

I’m from Chicago, Logan Square. I’m doing a project on changing perceptions and behaviors regarding climate change and mitigation efforts that people can do, hoping to try and change some people who are indifferent to this issue because it’s going to affect us all immediately. If people are indifferent to it, it might already be too late.

Detroit—Detroit’s Climate Strike was really cool and inspiring. About 700 people, mostly young, rallied and marched in downtown Detroit. All the speeches were by young people, mostly people of color. They are angry; they understand that life will not be the same in the future.

I went because I feel it is important to support the young people. They are listening to Greta Thunberg who inspires them and brings tears to our eyes.

I talked to an organizer from a left party who was dismayed that the speakers, some as young as seven years old, were not following the agenda. I told him, “When you were their age, you didn’t follow the agenda either.” 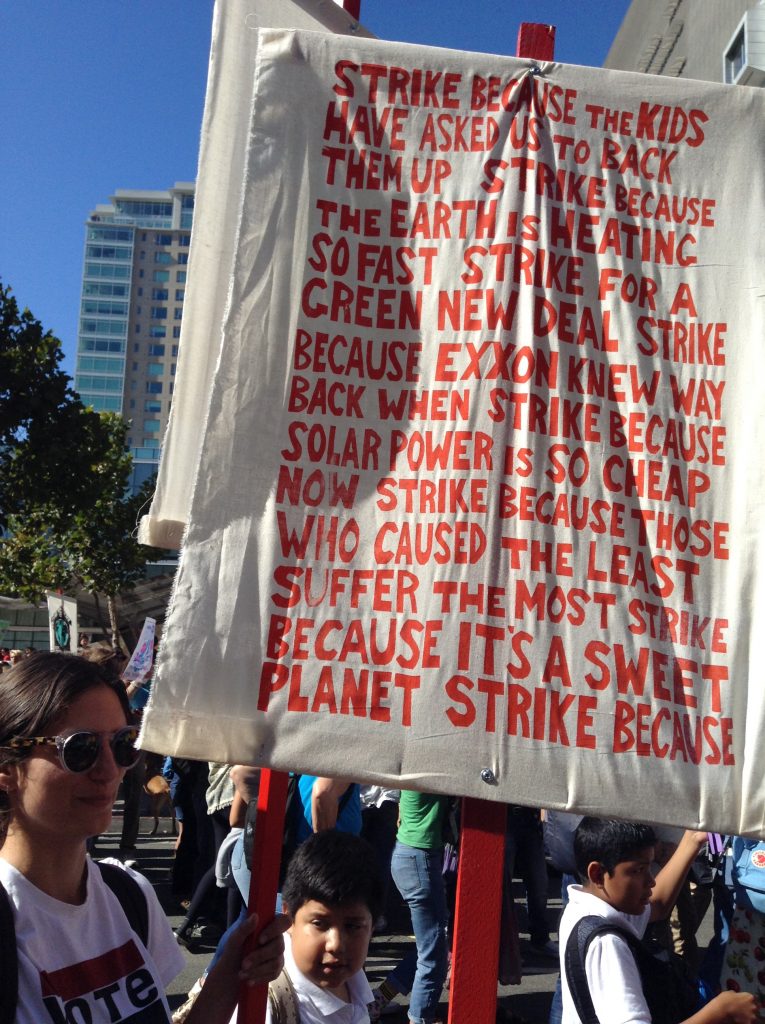 San Francisco—On Sept. 20, the day of the Global Climate Strike, thousands of people, young and old, marched three miles from the Federal Building over to Market Street, pausing in front of Exxon and Bank of America and other locations to call out corporations. Hundreds of high school and college students led off the march, with a youth marching band playing “Which Side Are You On,” and contingents of even younger pre-teen and primary school students along with union members and climate activists of all ages, including a large group of grandmothers.

Marchers carried signs proclaiming: “The Sea Level Is Rising—So Are We”; “Make Earth Cool Again”; “SkolStrejk För Klimatet,” in Swedish to honor Greta Thunberg, the 16-year-old who had initiated the school strike movement (see “Greta Thunberg: No One Is Too Small”, N&L November-December 2019, p. 8); “There’s No Planet B”; and, quoting Dr. Seuss’ The Lorax, “I speak for the trees, for the trees have no tongues.”

Discussions during the march centered on what could slow or reverse climate change, with the young people leading the movement critical of dead ends like the carbon tax and other panaceas that capitalists might feel they could live with.