Detroit—When teachers from an entire state can unite and strike in the middle of a school term, something new in the movement for intellectual freedom has occurred. The teachers across Oklahoma, as well as throughout New Jersey, Kentucky and Arizona, have proved that the statewide strike of teachers in West Virginia was only the beginning.

Why now, among teachers so dedicated that they drag themselves to school in bad weather or when under the weather themselves? Teaching has always been one of the lowest-paid professions—by no accident, as historically it has been “women’s work.” Demands for better pay and conditions resonate among teachers in all districts, from the inner city to rural areas to wealthier suburbs.

ALL THE LIVELONG DAY

When teachers work side jobs to make ends meet, it takes a toll on their teaching. No one knows this better than teachers themselves. Preparing lessons, keeping gradebooks and providing timely feedback on student work all require time beyond the hours of the school day. So when teachers proclaim they are on strike for their students, they are. 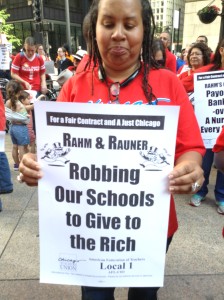 In an overwhelmingly female profession, the impact of the Women’s Marches and the #MeToo movement should not be underestimated. The mass student resistance to gun violence and for a safer world, shown in The March for Our Lives, has further inspired us.

Low wages reflect the erosion of the profession. Teachers are asking, “What kind of labor should I do?” Should I only oversee children being fed facts by a machine? Should standardized tests, whose scores determine the fate of the children, myself and my entire school, dominate my lessons? Or can I play with my class in the sandbox where I can help them develop spatial skills (math), cooperation, language skills and problem solving? The art of teaching means you have to know your students in order to connect their lives to the subject matter. Their life stories tell you what methods are best for that child.

The dominance of standardized testing is fueled by large educational corporations, such as Pearson, which write the textbooks and the tests for huge profit. Reliance on standardized tests to prove educational success shows how our capitalist society will commodify anything that can yield a profit, regardless of its human toll.

Reducing the entire population of a school to test scores weighs heavily on a teacher’s instinct to relate to each child as a whole human being. Sadly, television is replete with commercials promoting online learning for under-performing children—the very ones who need human contact to overcome their learning difficulties.

How do you measure successful teaching and learning? Is it the young adult you meet years later—that kid who always gave you a hard time—who says “I learned so much in your class,” or by her score on a standardized test?

← Remembering Andy Phillips
Only revolt grows in Iran’s deserts →
This work is licensed under a Creative Commons Attribution-ShareAlike 4.0 International License