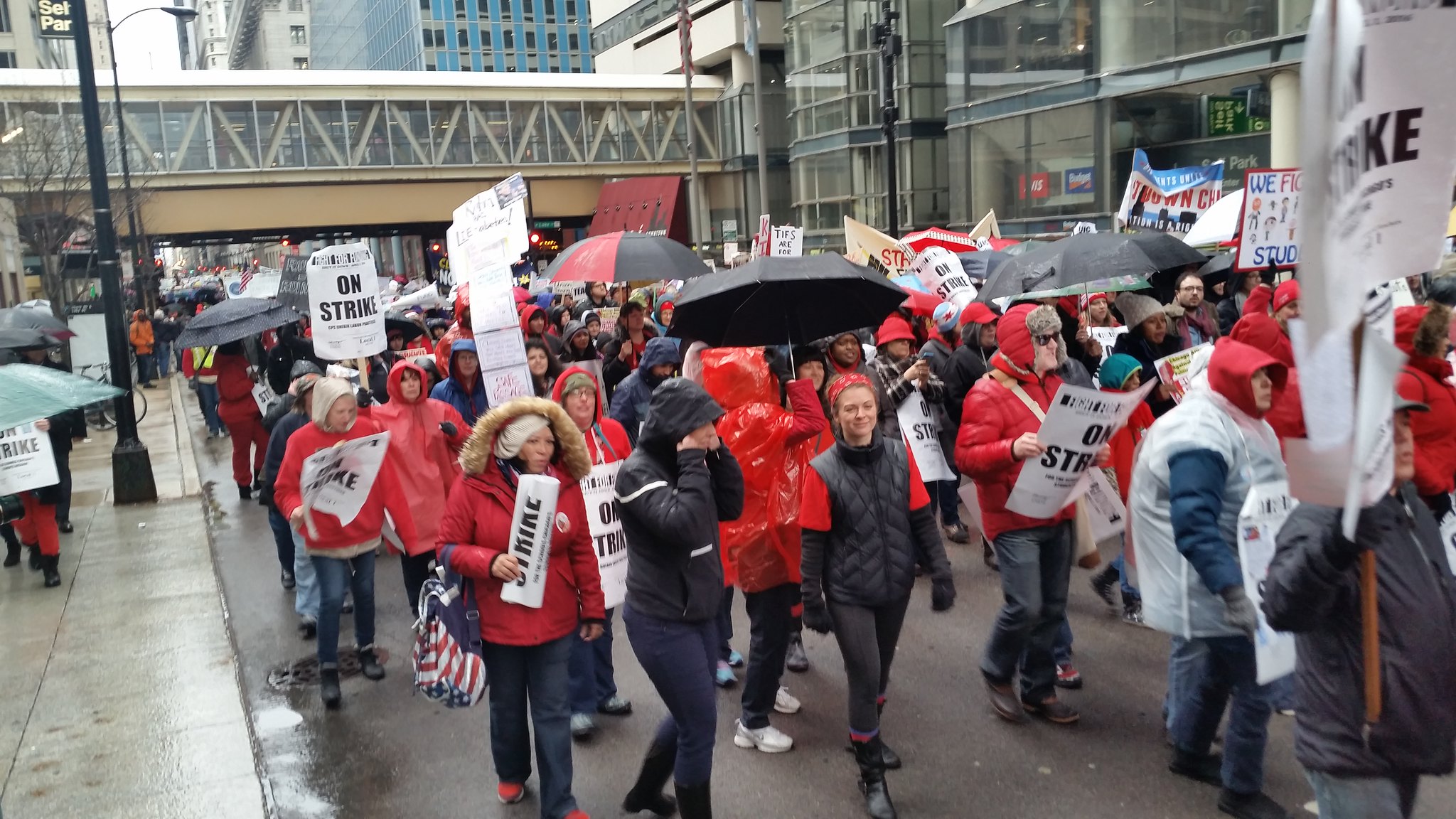 Chicago teachers one a one day strike on April 1, 2016, take over downtown Chicago streets. Photo by Franklin Dmitryev for News & Letters.

Chicago—The Chicago Teachers Union’s (CTU) one-day strike action April 1 was a real step forward. The CTU was principled in making explicit its support for the Black Lives Matter movement, in making practical alliance with the struggles of Black and Latino communities and low-wage workers, and in sharing platforms with these forces throughout the day. Perhaps it is a modest step, considering the depth of capitalist society’s crisis, but the convergence of labor and Black struggles is key to any hope for revolutionary change.

This dynamic was seen at the forum on March 9 that brought together CTU President Karen Lewis with spokespeople for teachers (including university staff), students, Black Lives Matter, and the disability rights group ADAPT. The idea of labor and Black unity was central to the organizing discussions for April 1.

It became a full day of activities for many of us. Teachers and students who had begun picketing outside local schools at 7:00 AM then marched to a McDonald’s at Foster and Kedzie to support mostly Latino/a workers in a Fight for $15 rally. They were joined by members of the Amalgamated Transit Union and Japanese workers in Chicago for the Labor Notes convention.

Following a spirited rally, everyone headed to the Northeastern Illinois (NEIU) campus. Thousands of teachers and students marched through the neighborhood, gaining lots of supportive car horns and thumbs up. The college jazz band played numbers like “St. James Infirmary,” in a funeral valediction for education funding.

At the NEIU rally, speakers ranged from students defending aid programs to American Federation of Teachers head Randi Weingarten and Seattle city council member Kshama Sawant. The discussion was limited to whether current politicians should “do their jobs” or they should be replaced. There was much criticism of Illinois’ nihilistic Gov. Bruce Rauner, who has decimated state funding for education, healthcare—particularly AIDS, mental health, breast and cervical cancer and disability services—and youth homelessness, among much else.

Many teachers converged at Chicago State University on the South Side to join students, faculty and other union members for a teach-in organized by Black Youth Project 100. Just as the CTU calls out the Chicago Public Schools’ cries of poverty as “Broke on Purpose,” state colleges have received no state dollars since October. Gov. Rauner is holding the budget hostage to anti-union demands. Chicago State, an historically Black university, is the first to run out of cash and plans an early shutdown. Chicago State students spoke out, as did faculty and supporters from the CTU and other unions. 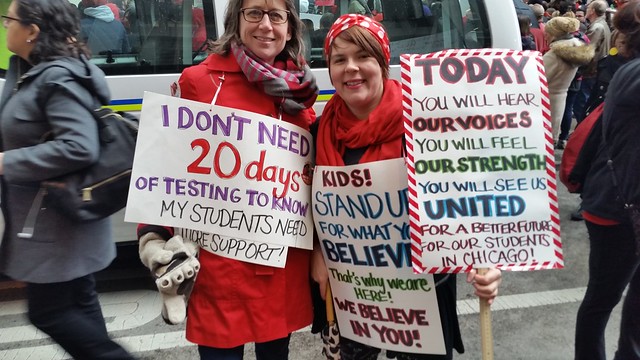 The more radical logic that underlay the day was expressed at an afternoon demonstration against youth imprisonment at HenrySuder School. The speakers, mainly young Blacks and Latinos, called the entire racist capitalist system into question.

Black Youth Project 100 and Assata’s Daughters, which have had an impact in fighting police brutality and forcing the removal of Police Commissioner Garry McCarthy and State’s Attorney Anita Alvarez, made the connection between cuts in funding for education and the “school to prison pipeline” that has become U.S. capitalist society’s default method of dealing with its intractable crisis.

At 4:00 PM, many thousands converged on Chicago’s downtown for a massive rally that spilled onto every street adjoining the Thompson Center. We marched in the rain for miles, ending in muddy Grant Park, reminiscent of the nine-day CTU strike of 2012 that forced Mayor Rahm Emanuel to the bargaining table. Yet the day’s events—engaging parents, students, Black Lives Matter and unions in solidarity—will prove even more critical to a CTU strike as early as May 16.

← World in View: Refugee crisis measures world’s inhumanity
I. Discontent, revolt and reaction in the U.S. →
This work is licensed under a Creative Commons Attribution-ShareAlike 4.0 International License