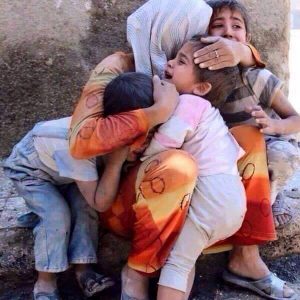 This picture of terrorized civilians in Yemen was taken in Nov. of 2015. Nowin 2018, the situation is so much worse.

Neither was true. Now Yemenis face another winter of war, hunger, disease—cholera and diphtheria—and the brunt of Saudi and Iranian imperial rivalry. Over half the population, at least 18 million people, stand in need of urgent humanitarian assistance.

Both the Saudi-led coalition and the Iranian-supported Houthis are guilty of war crimes. Militias have arisen around the war zone which profit by smuggling goods and weapons. Al-Qaeda remains a threat and occupies territory.

In 1931, the great French writer Paul Nizan, resident in Yemen, called colonial Aden “a knot that ties many strands together….a highly concentrated image of Europe…” Today Yemen can be seen as a mirror of the world’s social and moral disintegration.

After receiving an award from the Committee to Protect Journalists in November, feminist writer Afrah Nasser pointed to the humanity that remains a different option:

“Even though I am an independent Yemeni voice, I consider myself part of the collective Yemeni civil society that emerged in the wake of Yemen’s 2011 uprising—not the traditional organizational civil society, but rather the space in which young people met, interacted, and voiced their grievances and demands…

“Yemen’s vibrant civil society still persists against all the odds. It’s never too late for the U.S. to support the rainbow in the midst of the storm, the Yemeni civil society.” (Please see Afrah Nasser’s blog: http://afrahnasser.blogspot.com/2018/01/my-turned-down-article-by-major.html.)

An idea of freedom existed in the squares during the Arab Spring revolts, and for those who care about humanity’s future, that idea becomes even more compelling as it judges this terrible present.