Did Trump conspire with Russia? The genocidal bombing campaign the Russian military conducted against Free East Aleppo in Syria last year took its cue from a Trump phone call to Putin. But former FBI director Robert Mueller isn’t looking into war crimes in Syria or Ukraine.

Money-laundering charges filed against former Trump campaign director Paul Manafort and his associate, Rick Gates, are designed to put the hook into the Trump administration. 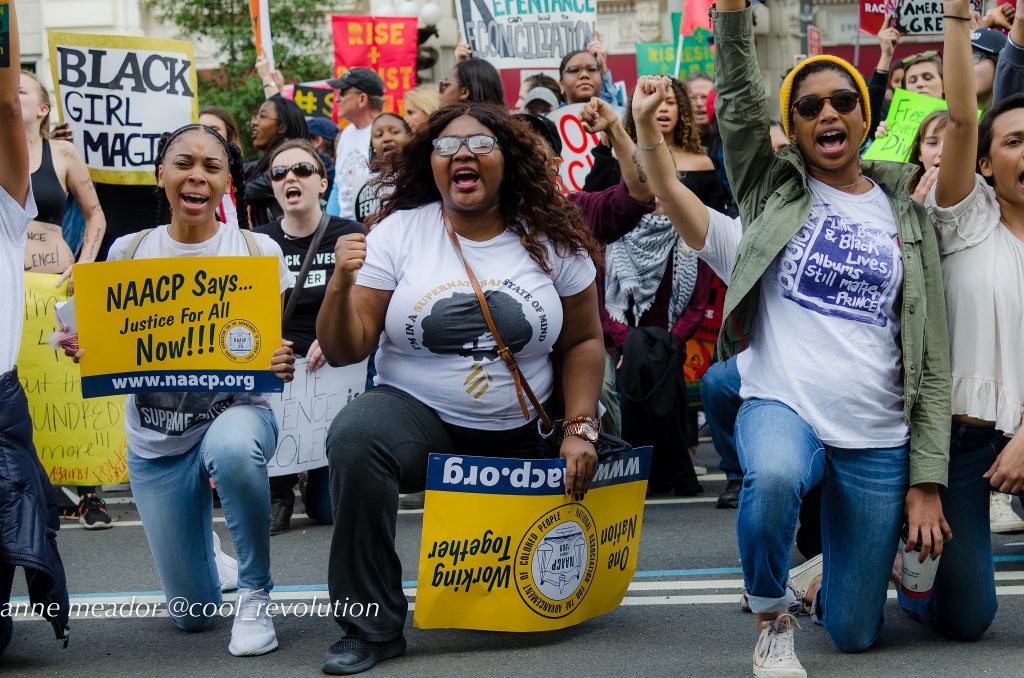 Kneel-in in front of Trump Hotel in Washington, D.C., on Oct. 1, 2017, as part of March for Racial Justice. Photo: Anne Meador@CoolRevolution

The specific focus of lifelong Republican Mueller’s investigation is designed to manage the current conflict within the ruling class. Elements in the Republican Party leadership are resisting its complete takeover by neo-fascists like Trump strategist Stephen Bannon.

Former House Speaker John Boehner, once the right-wing standard bearer, now calls these people “assholes” and “anarchists” who “want chaos.” South Carolina Republican Rep. Robert Inglis said, “Donald Trump is reshaping the heart of the GOP into something that is very dark and diseased.”

Vice President Mike Pence’s chief of staff, Nick Ayers, recently made a pitch to wealthy Republican donors to support Trump’s takeover of the party, including Bannon’s false promises of “infrastructure building,” in return for further tax cuts. He promised the donors immediate profits, while saying that “ordinary people” would see no benefit from Trump’s policies “for years”—amounting to tax cuts for the rich in return for “Trump über alles.”

The rich audience loved this plan. Since then, Republicans opposed by Trump have been dropping out of re-election contests.

RACIST PARTY ‘TOO BIG TO FAIL’?

This investigation ignores the fact that the Republican Party has been a main vehicle for reactionary politics since Nixon’s racist Southern strategy. It is a model for right-wing parties everywhere. It has also bolstered every reactionary tendency within the Democratic Party.

Trump-style neo-fascism has been gestating for decades, as seen in Reagan-era photos of a younger Paul Manafort side-by-side with Lee Atwater, who in 1981 described the rhetoric of “tax cuts” as “abstract racism.”

From a bourgeois perspective, this makes the party “too big to fail.” So the Republican opposition to Trump can keep voting tax cuts for the rich, cuts in social programs, and other racist and misogynist agenda items. Too many Democrats meanwhile defer to Mueller’s narrow investigation.

To be rid of Trump would be a victory. But it is vitally important to keep up our own pressure on the rulers—only mass protest has allowed this split among them. This is a moment when class struggle becomes clearly defined, both in itself, and as inextricable from the struggle against racism, misogyny, homophobia, xenophobia and religious bigotry—the struggle for a revolutionary humanism.