There was an amendment to add a $15 minimum wage provision in the 2021 Covid-19 relief bill, but it only managed to garner 42 votes out of the needed 60. On March 7, all Senate Republicans and eight Democrats voted no. The current federal minimum wage is $7.25/hour, which translates to about $15,000/year before taxes. 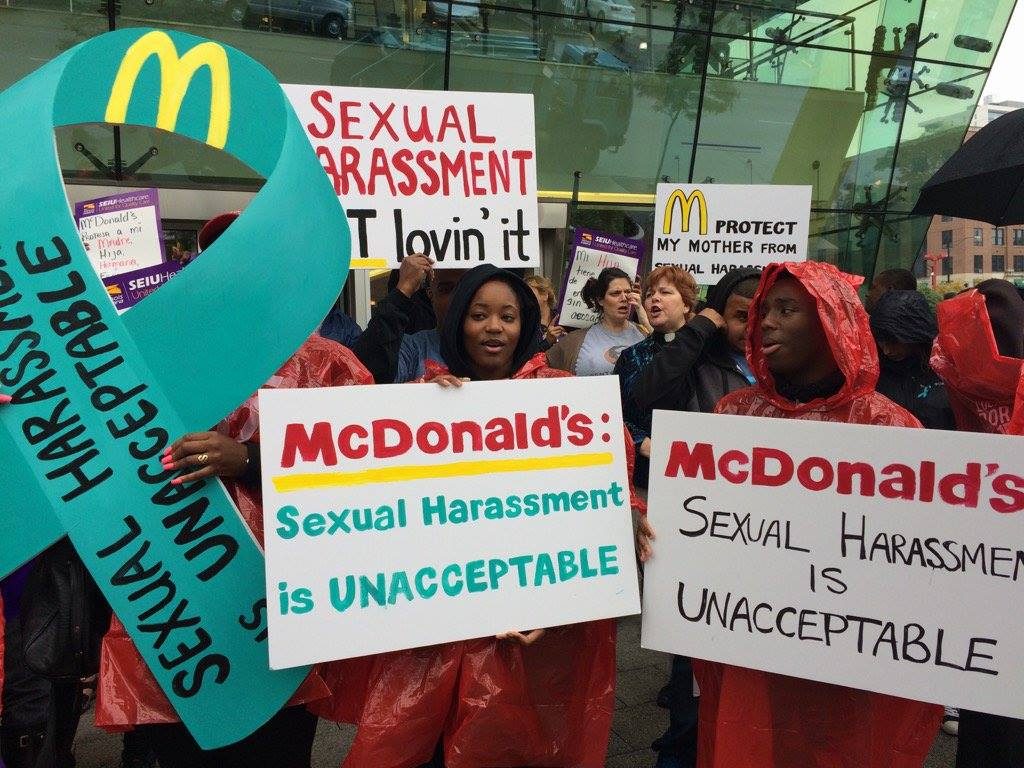 Workers across the nation take to the picket lines against McDonald’s to fight for $15 and against sexual harassment. Photo: Fight for $15.

A large majority of Democratic voters and slightly less than half of Republican voters support raising the minimum wage to $15. However, the popularity of the Trump campaign suggests many white people are firmly conditioned in a false and racist presumption that most of post-1960s liberal economic policy has benefitted mainly immigrants and people of color. This might explain why five of the eight Democratic-caucus Senators who felt electorally comfortable to oppose the minimum wage hike were from four states where the population is more than 80% white—Maine, New Hampshire, West Virginia, and Montana.

West Virginia Senator Joe Manchin is a 50% owner of a retail chain called Wholesale Carpet Outlet, among many other investments. In expressing his opposition to $15, he countered with an $11/hour minimum wage. An analysis by The Young Turks looked at public information available through the Payroll Protection Loan Program to determine that the average pay of workers at Wholesale Carpet Outlet also happens to be $11/hour.

In addition to the naysayers, most or all Senators are reliant on large corporate cash infusions and may have been happy to vote yes on something they knew wouldn’t pass anyway. There was much ado about presider of the Senate Kamala Harris’s reluctance to overrule the Senate parliamentarian and pass the amendment with 50 votes, herself breaking the tie. But her actions are effectively indistinguishable from those of Majority Leader Chuck Schumer and any other senator who prevents the caucus from eliminating the filibuster (60-vote rule) altogether.

Within this or any other capitalist political system, workers can never be paid equal to the value created by their own labor power. Back in 1867, Karl Marx outlined in Capital how the consumer market alone is not enough to yield a continuously growing rate of profit. The shortfall must be made up by the capital market, such as in the form of machines and infrastructure. These are what Marx called dead labor, which in turn increases the productivity of human workers, the living labor who create (new) value.

One hundred years later, the federal minimum wage in the U.S. was $1.60/hour. If it kept pace with average gains in productivity, this year it would be more than $24/hour, according to the Center for Economic and Policy Research. Even that is not equal to the value now being created per hour by the average worker.

← Anti-abortion violence
Worldwide attacks on freedom of thought →
This work is licensed under a Creative Commons Attribution-ShareAlike 4.0 International License