Knowledge of the Catholic Church’s insidious corruption didn’t need to wait for the report by the Pennsylvania Grand Jury of the over 300 priests who, over 70 years, sexually abused over 1,000 children which the church covered up. 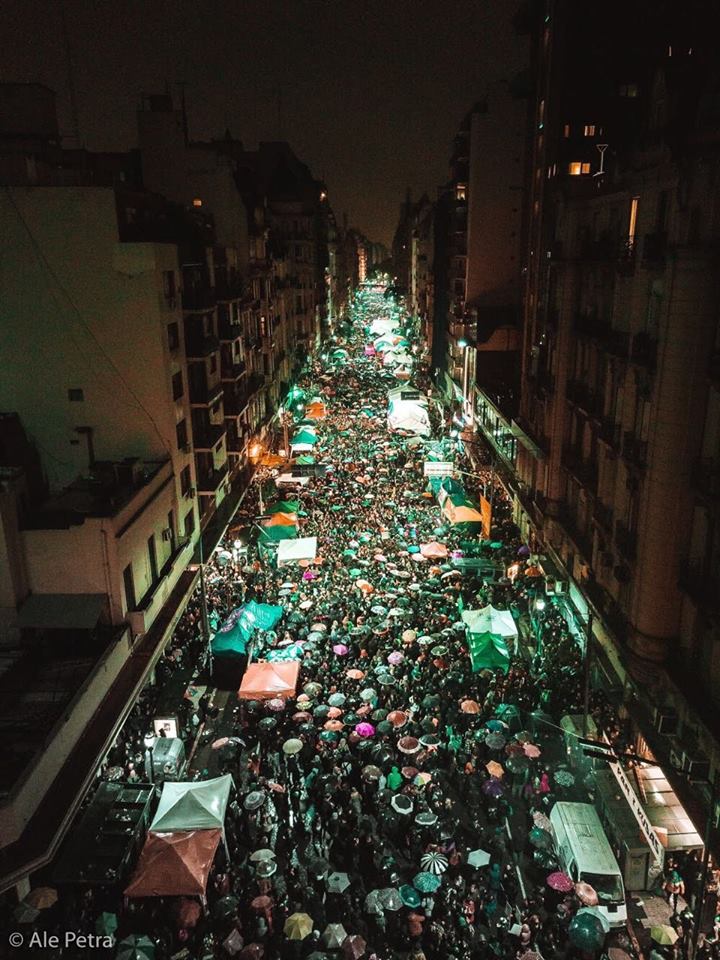 Hundreds of thousands of Argentinian women flood the streets in a sea of green as the Senate debated ending the abortion ban. Photo: Ni Una Menos.

Ireland lived this reality and more for decades. Priests, using the country like pigs using a trough, wallowed in misogyny, rape, and brutalizing children.

They imprisoned women and girls in workhouses for the “crime” of being pregnant, worked them to death, shamed them, ripped away their babies. Orphans were not spared the church’s workhouses; those who died of overwork, abuse or starvation were buried in secret graves.

The church forced thousands of women to have children they could not afford or did not want, or to travel to England for an abortion. This in a country where selling or importing contraceptives was illegal until 1980 and then highly restricted. Thousands of women died from this; thousands more were maimed or made infertile by back-alley abortions.

Even Archbishop Carlo Maria Viganò’s grand show of accusing Pope Francis of covering up child sexual abuse only further reveals that there is no “right side” of the church. While Francis had to be forced to speak out on child sexual abuse, Viganò cares nothing about children or the abuse.

Viganò is a part of a sinister force of far-Right Catholics who want to destroy the separation of church and state, return to a medieval anti-Semitism, and intensify existing misogyny, homophobia, and authoritarianism. They despise the mild reforms instituted by the Second Vatican Council in the 1960s, instead echoing the “Church Militant” theology of Stephen Bannon. Bannon and the U.S. Catholic Right have been in conflict with Rome over immigration, climate change, and other issues. They have formed alliances with the European Catholic far Right that holds power in Poland and Hungary.

The lie that the church is a force for good is revealed in all their endeavors. From charities to schools to hospitals—all are rife with discrimination against women, LGBTQ people, and those of other faiths. A case in point is Catholic hospitals.

HIDING THE TRUTH IS THE NORM

While vowing—finally—to be truthful regarding pedophile priests, when it comes to Catholic hospitals, the opposite is the norm.

The church has been gobbling up hospitals so aggressively over the last 15 years that it owns every sixth acute care hospital bed in the U.S. In some states like Wisconsin, it owns 50%. In some areas the only hospital is Catholic.

One study showed that over the last 29 years “a number of Catholic hospitals have changed their names to something less obviously Catholic,” like “Dignity Health,” rather than Catholic Healthcare West.

They hide their refusal to practice the full range of healthcare, including full end-of-life care, sterilizations, vasectomies, access to contraception including the morning after pill for women who have been raped, abortion, etc. With names like “Trinity Health,” “Ascension Health,” “Presence,” most people don’t know if they are dealing with a Catholic hospital or one that will actually give them the highest standard of care, rather than one that must kowtow to rules made up by the Conference of Bishops.

Catholic hospitals hide information about the services they withhold unless state laws demand it be readily available. Father Bouchard of the Catholic Health Association lied that hiding what they refuse to do “is certainly not an attempt to deceive anybody…It’s simply to make people feel comfortable and welcome in an increasingly pluralistic society.”

At worst this means that women die like Savita Halappanavar in Ireland in 2012. After a spontaneous miscarriage, she needed an abortion but the hospital refused, opting to wait for the fetus to die—a known outcome—before they would treat her. She died of sepsis while she and her husband begged for the care that would have saved her life.

THE BEGINNING OF THE END

Members of #NiUnaMenos at one of their many reallies for legal abortion. Photo: Ni Una Menos.

When the Irish people elected gay Prime Minister Leo Eric Varadkar and then voted to repeal their country’s ban on abortion, they signaled the beginning of the end of the Catholic Church’s dominance in many countries where they formerly wielded tremendous power. This followed decades of work by feminist movements to make birth control and abortion legal and accessible, documenting the death and destruction of women’s lives and bodies by a church that banned them from its inception from full participation. Women and men also created movements to bring the pedophile crimes of the Catholic Church out into the open, and to demand that civil society change the laws so that past abuses on children could be prosecuted years after they occurred.

While Chile, Brazil, and even El Salvador are becoming serious about decriminalizing abortion, it is in Argentina where the next step against the church’s dominance has already been taken. Again, it was the movement of women that made the difference, this time #NiUnaMenos (Not One Less).

Women built a powerful movement to end violence against women, of which abortion bans are a part. When the lower house of Argentina’s Congress passed the bill after over a million, mostly women, flooded the streets, it was expected that the Senate would follow. But the Pope and church pulled out all the stops, with Francis declaring that abortion was the “white glove” equivalent of Nazi eugenics. The Law of Voluntary Pregnancy was defeated in the Senate despite the hundreds of thousands who rallied in the streets for 17 hours, their handkerchiefs creating a sea of green in the cold, rainy night.

Yet that defeat was not a defeat: everyone saw that it was only a matter of time—a short time—before the movement overwhelms a medieval impediment to a woman’s control of her own body.

Another thing is certain: no matter what Pope Francis, Viganò, or others do to prop up the church, the crime of priest abuse and the other multiple evils the Catholic Church has imposed on women, children, and men, will continue to unfold as more countries and U.S. states investigate church child abuse. More facts will emerge. We are witnessing the beginning of the end of the Catholic Church. The only question is: How long will it take?

← Editorial: Stop the coming slaughter in Idlib!
Voices from the inside out: The need for unity →
This work is licensed under a Creative Commons Attribution-ShareAlike 4.0 International License