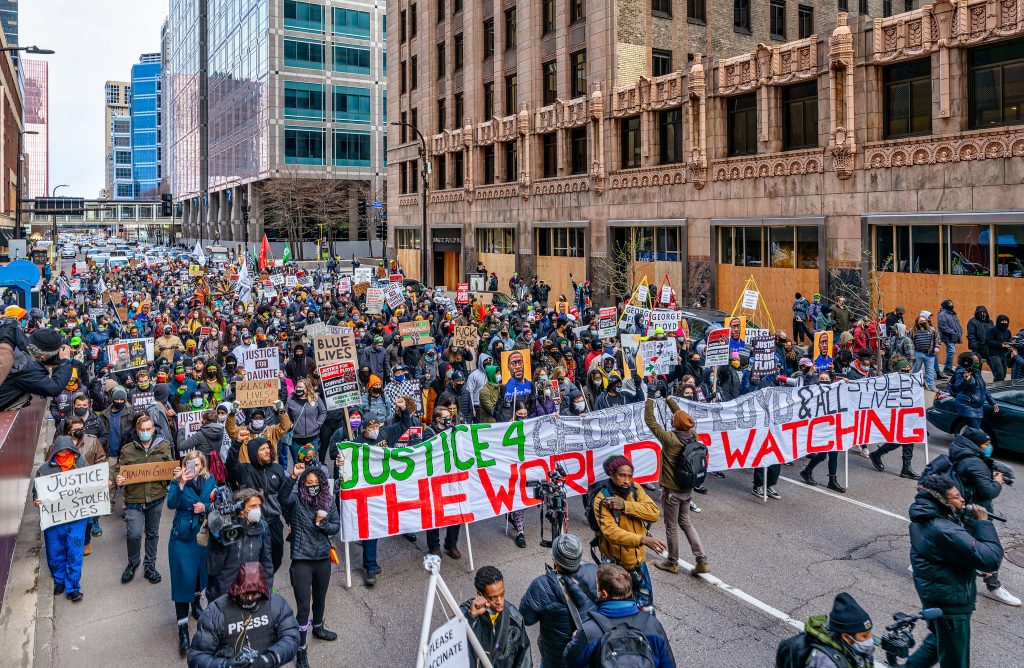 A march through downtown Minneapolis calling for justice for George Floyd on April 19 during the jury deliberations in the Derek Chauvin trial. Photo: Tony Webster, https://www.flickr.com/photos/diversey/51127293312/.

The murder of Floyd had spurred the largest wave of protests in decades, bringing demands to defund the police—and abolish the criminal injustice system—from the margins to the center of politics.

DEMONSTRATORS DANCED IN THE STREETS

The verdict sparked new marches and new pain. In Washington, DC, demonstrators danced in the streets. In New York, hundreds knelt in solidarity with Floyd near Penn Station, while others marched across Manhattan Bridge and in Brooklyn. In San Francisco, a demonstrator’s sign spoke for many: “Justice for George Floyd Is No More Cop Terror.” A vigil was held in Houston, where Floyd was born. In Louisville, where Breonna Taylor had been gunned down by cops invading her home, protesters gathered outside the Jefferson County Hall of Justice. Hundreds more marched in vigils and demonstrations across the U.S. in the hours and days following Chauvin’s conviction.

What exactly had been “won” with the guilty verdicts? While the prosecutors did present George Perry Floyd Jr. as a real human being, the comprehensive case they built against Chauvin was as a “rogue cop,” a bad apple. There were no charges against the two other cops who stood by and did nothing while Chauvin murdered Floyd; no charges against the Minneapolis Police Department; and nothing indicting the systematic racist policing that year after year, decade after decade murders and incarcerates Black and Latinx men, women and children in unconscionable numbers.

Protesters pointed to what happened during the trial, as police continued to kill about three people a day:

* Daunte Wright, 20, was shot and killed by a policewoman in a Minneapolis suburb.

* Thirteen-year-old Adam Toledo, unarmed, was shot down in an alley by a Chicago policeman.

* Mario Arenales Gonzalez, 26, died after police in Alameda, Calif., pinned him facedown to the ground for five minutes.

These police killings, and the lies cops tell to cover them up, are the daily truth of Black and Latinx life in the U.S. Although for once a victim received a long, long overdue measure of vindication, it was because of the power, organizing and creativity of the Black Lives Matter movement that spoke to tens of thousands over the last half-dozen years, and, most poignantly, since Floyd’s murder.

VICTORY WAS MADE IN THE STREETS

As one Los Angeles demonstrator, whose 21-year-old nephew had been killed by Los Angeles sheriff’s deputies in 2018, said: “The people taking to the streets got us guilty verdicts yesterday… not the system. The system isn’t for us.” “He should still be here,” Mr. Floyd’s brother, Philonise Floyd, said of Daunte Wright. “We have to march. We will have to do this for life. We have to protest because it seems like this is a never-ending cycle.”

As Black Lives Matter Global Network stated: “This verdict does not change what we know all too well: White supremacy still exists. An oppressive, racist system cannot and never will deliver justice for our people. It will never keep us safe. What we saw today was some form of accountability—not justice.”

Black Lives Matter has birthed a new generation of activists, including Minnesota Teen Activists, organized after the Floyd protests last summer, who called out hundreds of Minneapolis and St. Paul high school students in a walkout commemorating Wright and Floyd. The same scene was repeated in hundreds of U.S. cities as new youth entered the movement by the thousands. One guilty verdict cannot tranquilize the new consciousness that burst out in the past year.

Black demands for freedom have—from the founding of the U.S.—put American civilization on trial. From the colonial period through the American Revolution, from the Constitution onward, the colonies and then the USA were built on racism. It was only due to the resistance of the enslaved Black masses together with the Abolitionists who brought forth the Civil War, that any seeds of democracy were sown and watered.

Again and again in U.S. history those seeds have been trampled by racist jackboots under cover of law; denied sustenance by government edict and private classist-racist interests. Again and again the Black liberation struggle has been born anew.

That struggle will not rest content with the conviction of a few officers. It has indicted the systemic racism of the whole society, and it aims for new, human beginnings.