On June 18, the U.S. shot down a Syrian Su-22 attack jet that had fired upon U.S.-allied Kurdish militias. The incident, along with the shooting down of two Iranian drones, shows the U.S. is serious about consolidating its presence in Syria. This determination to stay indicates something of its longer range plan for a territorial division of the country by the occupying powers.

Since 2011, the U.S. hypocritically refused to impose a No-Fly Zone to defend the Syrian people. It justifies its current intervention as part of the war against ISIS, a war that has been fought by Syrian revolutionaries for years. Yet it has allowed the genocidal Assad regime and its Russian patron complete freedom in attacking liberated areas.This shell game has always been a U.S. imperialist policy, but it wasn’t until the Trump administration that its logic was fully pursued. That is the logic that becomes inexorable when the masses are not allowed their self-activity. 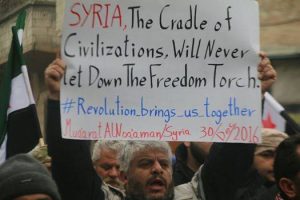 In bombing ISIS’s “capital” of Raqqa, hundreds of civilians have been massacred, some by illegal (in civilian areas) white phosphorus munitions. Up to 200,000 people have become refugees from the fighting there. This horror is being visited upon a city that was once liberated from Assad and that ISIS was only able to occupy by using U.S. weapons taken from Iraqi forces. It is a city that has continually resisted ISIS’s rule since 2014—which has included everything from heroic civil activists who formed Raqqa Is Being Slaughtered Silently to those in the clandestine armed resistance.

The U.S. assault on Raqqa (and Mosul in Iraq) both mirrors and draws attention away from the barbaric Russian and Assad regime assaults on Free Syrian areas like Aleppo (where rape, robbery and torture continue after Assad’s “victory”) and Free Daraa, where a similar mix of conventional and illegal weapons are being used to terrorize civilians. Ever-growing testimony and documentation from the Syrian regime’s prisons and military hospitals show how these institutions lent themselves to genocide.

Yet the Syrian Revolution continues. The people of Free Idlib have managed to hold off the regime and survive the bombing, and also push back against the (formerly al-Qaeda) fundamentalists that make up the counter-revolution within the revolution. These reactionary forces have been resisted from Idlib City to rural Maarat al-Numan. New unrest continues to develop among the Druze in Suweida as well.

Both the U.S. and Russia are sending a message to these grassroots forces. The message is, “We control your destiny.” There is a message for Iran as well. “You have done the work of counter-revolution. For this you have been paid,” says U.S. imperialism, “Don’t try to go beyond this role.”

WHAT IS THE ‘ENDGAME’?

In response to the U.S. shooting down the Su-22, Russia announced that its military would target any U.S. aircraft flying west of the Euphrates River. This is less a military threat than it is another territorial claim. The Iranians are desperate to push their own claims further, to establish a corridor to Iraq. To that end they have finally launched their own attacks against ISIS and against U.S.-allied forces, and also have launched a ballistic missile strike at ISIS-occupied Deir Ezzor.

But Iran has no military air capability in Syria. The Assad regime has two air forces, its own and Russia’s, on the sufferance of the U.S. and Turkey. The Kurds and their allies have U.S. and coalition air support. The regime has its legal façade of international recognition. The Kurdish PYD (Democratic Union Party) has demonstrated its opportunism. The logic of the situation requires these forces to push toward military victories over ISIS and Free Syria alike.

The U.S., Russia and, to an extent, Turkey would then be one step closer to the point at which they might hope to be able to impose a “solution” on the “crisis” of the Syrian Revolution. Without the consent of the Syrian people, this remains as unlikely and visionary an end as any battle of Dabiq or Armageddon. It has, however, delivered us back to Calgacus’ verdict on Rome: “They make a desolation and call it peace.”