The video shows an older Syrian woman, her name is Fadwa; she is part of a new group, Families for Freedom. She says: “It was 5:05 when [my husband and son] called me to say they had just got into the car and they were driving home. It turned 6:00, then 7:00, but they never arrived home. They were kidnapped at Damascus airport on their return from China. Ever since that day I have had no information about them. But I stayed strong because I needed to do something for them. I started searching for them.

“A young woman called me to say they were forming a group for women: Families for Freedom. Our sons, our husbands and our loved ones are in prison. We wanted our voices heard by the whole world.

“I will never get tired or defeated. I don’t think the women with me will be defeated either. They keep demanding freedom for their children. We were five women holding the pictures of our loved ones. I didn’t know which picture to hold, my husband’s or my son’s. The young people behind me held the picture of my son. The protest was very moving. I felt that I belonged among these wonderful women.

“I feel extreme pain inside me, but I was strong and stood tall because I am demanding what is right and we will make the world listen.”

As the world is learning of the Nazi-copied crematoriums in Syria, used to burn the bodies of perhaps hundreds of thousands of civilians picked up for no better reason than being in the wrong place at the wrong time, the “wrong” religion, or turned in by someone who holds a grudge or by a person who has money or something else to gain, women are organizing, as they have for decades, to bring their family members home.
In an open letter, Families for Freedom write to the delegates attending the Syrian “peace” talks, to Syrian armed groups and the Syrian, Russian, Turkish and Iranian governments: 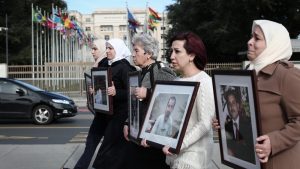 “The fate of 100,000 arbitrarily detained and forcibly disappeared sons and daughters is not a file for your military talks in Astana. We do not accept prisoner exchanges arranged between military sides as a replacement for a real solution to the horror of mass detention in Syria….

“It is precisely the peaceful detainees, those who have never picked up a gun, who will suffer from the detainees file being taken up in Astana. Who will be there to advocate for them when the military sides begin conducting prisoner exchanges for their own people? Our civilians will be forgotten.”

Who, indeed, will be there? Families for Freedom has been banned from attending.

What Families for Freedom is doing is not new. The Mothers of the Plaza de Mayo ushered in a new stage of revolt against the kind of government terrorism that grabs innocent people off the streets, or in front of wives, grandparents, brothers and sisters. Beginning in the 1970s, for years they marched in the center of Buenos Aires, Argentina, with the names of their missing children painted or sewn into their head-scarves. They began this at the height of the junta’s power and were one reason for its downfall. Their protests were as consistent as they were open, and there was nothing to prevent them from being murdered as well.

Women in Syria have been a vital part of the Free Syrian movement through six years of one of the most brutal wars against civilians the world has seen. Now women are trying to make sure they have a say in what justice is to mean; to make clear that no society can ever go back to being normal, to business as usual, until all questions are answered, until all the guilty are punished, and until all the innocent are free. They intend to make sure that “never again” is not to be only a heartbreaking plea, but a fact. These Syrian women have our greatest solidarity, as well as the knowledge that with their actions they have taught theoreticians where theory comes from.