In early August, the reactionary Hindu nationalist (Hindutva) government of Prime Minister Narendra Modi and his Bharatiya Janata Party (BJP) unilaterally abrogated the limited autonomy the state of Jammu and Kashmir had been granted under Article 370 of the 1950 Indian Constitution.

Tens of thousands of occupation troops poured into the state, joining the hundreds of thousands already there. Hundreds of local political figures—many of whom had previously collaborated with the BJP—were arrested, along with dissidents and independence activists. Schools were closed, tourists told to leave, and communication with the outside world was cut off.

Nevertheless there have been continuous reports of large demonstrations and resistance. 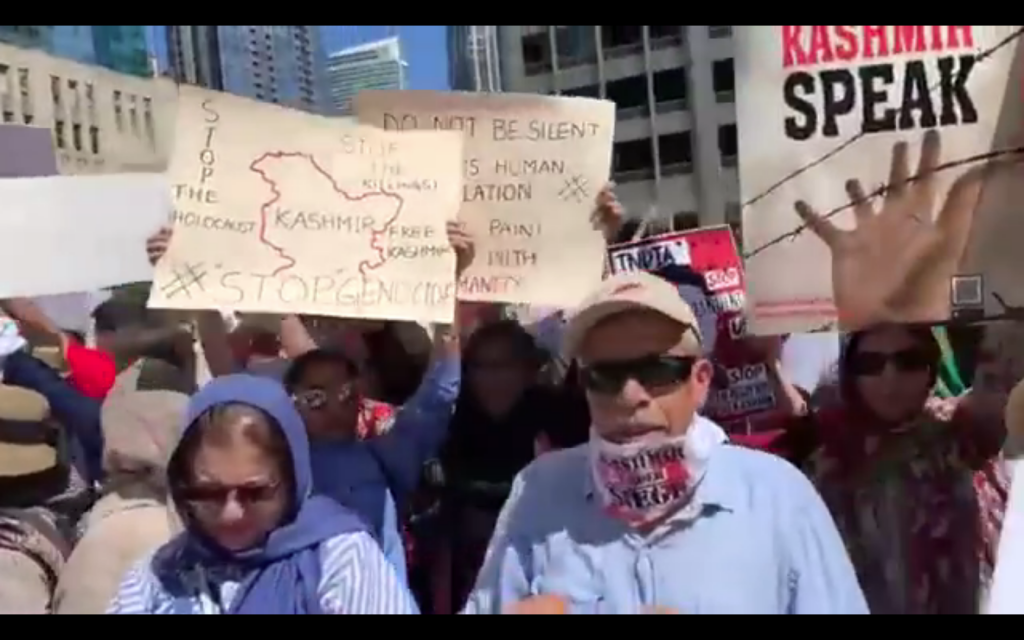 August 27, 2019, demonstration in Chicago against the occupation of Kashmir. Photo: Naveed Habib Khan.

Kashmir, India’s only Muslim-majority state, has long been a disputed region between India, Pakistan and, to the north, China. Its limited autonomy included the right to its own constitution, flag, and internal laws. It was able to determine rights to residency and property ownership. No longer.

Modi proposes to create two new regions: Jammu (Hindu majority) and Kashmir (Muslim majority); and Ladakh (Buddhist majority). Historically, Kashmir’s syncretic culture draws on all these groups. He presents this repression as a step toward incorporating Kashmir into his vision of a capitalism with roots in ancient religious texts of high-technology gods.

This move shocked many around the world. But it has its basis in reactionary historic developments, from the Bosnian genocide of the 1990s to Russia’s genocidal bombing of Syria’s Idlib today; from Communist China’s concentration camps for Uyghurs to the acceptance of these camps by all “Muslim” state powers.

As for the major world powers, Russia has largely taken Modi’s side. China has taken a hands-off approach that amounts to tacit acceptance. Trump has offered his own services as mediator between India and Pakistan—in other words, he has asserted his own, and U.S. imperialism’s, centrality to this changed world.

One measure of brutality and hypocrisy was taken by the Indian government’s claims that their aim was to “emancipate” Muslim women, followed almost immediately by vulgar “jokes” about “marrying the white-skinned women of Kashmir.”

History records that Indian independence leader, Mohandas K. Gandhi, was assassinated in 1948 by a Hindu fanatic offended by Gandhi’s “persistent pandering to the Muslims” over Kashmir. This “pandering” was simply the recognition of the humanity and basic rights of the people of Kashmir.

As Gandhi had stated, “What will happen to Kashmir will depend on you, the people of Kashmir.” The incomplete nature of Kashmir’s self-determination is what was enshrined in the Indian Constitution, a document drafted by B.R. Ambedkar, a Buddhist opposed to the caste system. Its abrogation is one aspect of Modi and the BJP’s effort to transform India along the lines of Hindutva.

Indian feminist scholar Banu Subramaniam describes this mutilation of history using a surgical metaphor: “Hindu nationalists bring the past and present together into one seamless story of a past sutured to the present, with a firm excision of the middle years of colonialism and conquest, in particular the histories of Islam” (Holy Science: The Biopolitics of Hindu Nationalism, 2019).

What is thus excised is the actual history of Indian struggles for freedom and self-determination, along with the multicultural creativity that accompanied them. It is the kind of ever-shrinking story the bourgeois world, in its intractable crises, tells itself as it circles the abyss.

← Help ‘News & Letters’ survive and thrive
From the writings of Raya Dunayevskaya: Permanent revolution and the dialectic →
This work is licensed under a Creative Commons Attribution-ShareAlike 4.0 International License