Kyushu, Japan—Two activists from the anti-base struggle in Okinawa took a ferry in late June to the Japanese main island of Kyushu and began walking from town to town, meeting with citizens, mayors and city councils in an attempt to convince them to stop the national government’s extraction of their soil. The soil taken from the main Japanese islands is to be used as bay fill in the construction of two new airport runways at Henoko (U.S. Camp Schwab) on pristine Oura Bay, Okinawa Island. 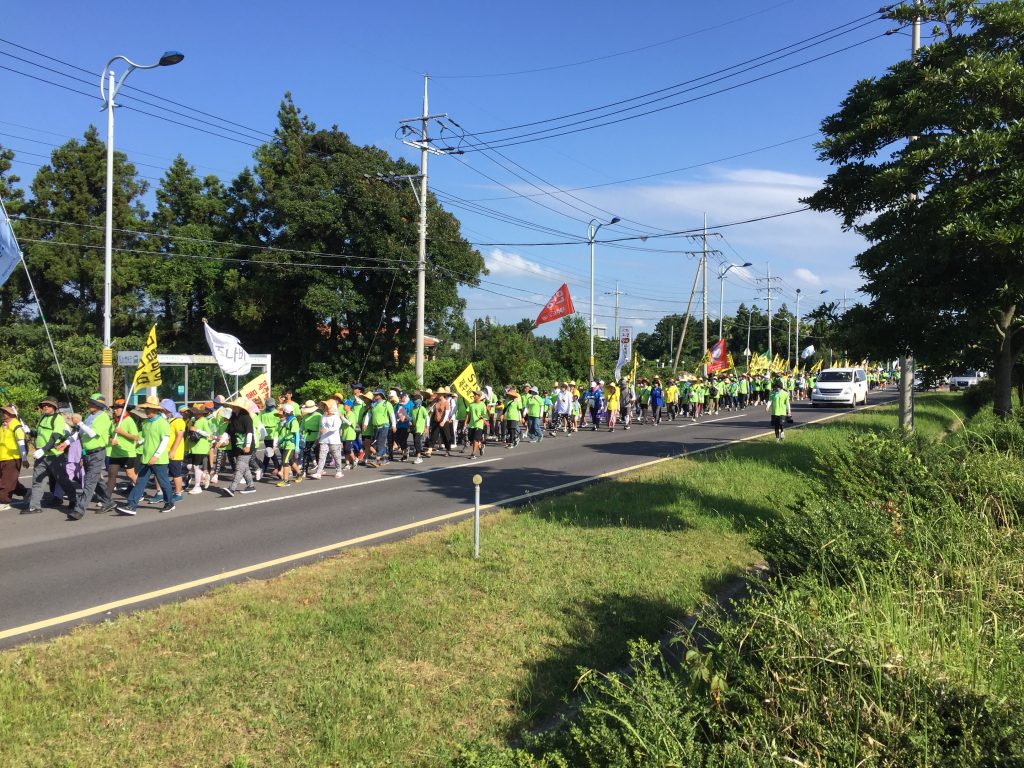 Students and supporters march in opposition to a proposed airport on Jeju-Do, South Korea. Photo: Buddy Bell for News & Letters.

Sarasa and Kamoshita, affiliated with the Nipponzan Myohoji Buddhist order, were joined by about a dozen monks and students along the way, focused on stopping base construction in Okinawa and on pressing denuclearization in Japan, which means phasing out nuclear power and joining international efforts to eliminate nuclear weapons.

Their walk traversed the areas of several proposed nuclear power plants along the way to its final stop. They ended at Hiroshima, on Honshu Island, on Aug. 6, the anniversary of its bombing by the U.S. in 1945—the first explosion of a nuclear warhead used against people.

Upon her return to Okinawa, Sarasa attended an Aug. 8 memorial for the deceased former Okinawa governor Takeshi Onaga. “Compared to the size of the peace ceremony held in Hiroshima, [the memorial] began to give me a strong feeling of the gap between Okinawa and the mainland. People [on the mainland] feel that war is over; but in Okinawa, there are people who feel that [war in] Okinawa is not finished. I think that the best memorial to the Okinawa war is to lose the [Henoko] base.”

Onaga’s death may have bought the activists more time because the governor’s most prominent legacy had been to tactfully sabotage the bay fill scheme. Sarasa pointed out: “If the Japanese government tries to landfill Oura Bay now, Okinawan public opinion will heat up.”

← Queer Notes, September-October 2018
Stand up for change →
This work is licensed under a Creative Commons Attribution-ShareAlike 4.0 International License