Many people with disabilities are falling through the cracks when trying to get their COVID-19 vaccines. Some are confused about age limitations, and some are unable to get transportation to and from vaccine sites. There have been people knocking on apartment doors in some cities like New York and Boston offering rides to seniors and others who need them.

Film director Mohamed el-Ansary and script writer Ramez Abbas in Cairo have made a TV series dealing with disabilities called “El-Qadiya 404” (“Case 404”), after the computer error message when failing to communicate. The scripts were written by a disabled person, and it stars 25 disabled actors for the first time in the Arab World. Their purpose is to increase inclusion of people with disabilities in the media and arts and to tell their stories. The first season, covering 12 themes over 10 episodes—including sexual abuse, bullying, exploitation, stigma and discrimination—was released on social media during the Muslim holy month of Ramadan. 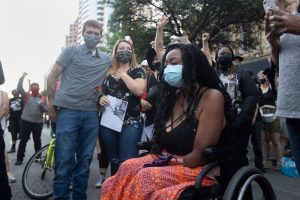 Whitney Mitchell, who is Black and a quadruple amputee, was the fiancé of Garrett Foster, who was shot and killed by a U.S. army sergeant at a protest on July 25, 2020. The sergeant drove his car into the crowd of protesters at a Black Lives Matter protest in Austin, Texas, and then shot Foster, who was carrying a gun. Then, on March 29, Mike Ramos, an Austin police officer, dumped Whitney out of her wheelchair onto the street at a protest against the murderers of Foster and Alex Gonzales, Jr. A video documents Whitney struggling with the officer as he pushed her towards the sidewalk. Whitney was dumped out of her wheelchair and was unable to move. The cop looked at her, shrugged, and left her in the street without her caregiver, who had just been arrested for trying to stay with Mitchell.

← World in View: The Syrian Revolution can’t be killed
Youth in Action: May-June 2021 →
This work is licensed under a Creative Commons Attribution-ShareAlike 4.0 International License