From the January-February 2020 issue of News & Letters

Los Angeles—On Nov. 12, a thousand DACA students, known as Dreamers, and their supporters walked out of class and marched to the Roybal Federal Building downtown. We were protesting Trump’s repeal of DACA (Delayed Action Childhood Arrival program), which allowed undocumented migrants brought to this country as children the human right to work, to go to school and to live free of deportation. 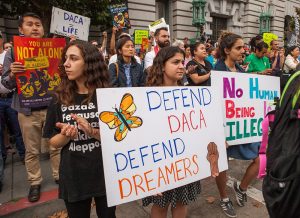 At the time of the protest, a challenge to Trump’s abolition of DACA was being heard at the U.S. Supreme Court in the case of Department of Homeland Security vs. Regents of the University of California. Janet Napolitano, who as Homeland Security Secretary authored DACA in 2012 under President Obama’s executive order, now heads the University of California. Chief Justice John Roberts will likely be the deciding vote on whether the DACA program will continue or will be repealed.

Hundreds of Mexican-American students from Garfield High School in East Los Angeles walked out of school and marched, stopping in Little Tokyo for a rally before continuing to the federal building. They were met by multi-racial students from the San Pedro Area, Black students from South Central and students from other parts of the city, as well as immigrant rights activists and media.

Signs read “Defend DACA!” “Our dreams are not illegal,” “Education not deportation,” “Home is here,” “If fleeing U.S. funded wars, terror, intolerance, and fear is illegal, let’s fix it,” and “Roberts Court, listen to us: we are the people who you work for.”

Speakers included Samantha, a 16-year-old student activist who helped organize the walkout. Her message to the justices: “Take into account that DACA recipients are welded into their communities.” Another young woman stated: “I was five years old when I arrived. I have not been to Mexico in 20 years. My mom and dad are legally here. I am studying to become a lawyer.”

After an hour and a half, the students resumed their march through the civic center and past the financial district for several miles to MacArthur Park, in a Central American immigrant community. They were met by Central American migrants and supporters for another rally.