The anti-Gay, anti-Latino, racist attack on people at the Pulse nightclub in Orlando, Florida, is unprecedented. Near 2 AM, after a night of celebrating Latin Gay identity, patrons were assaulted by heavily armed domestic terrorist Omar Mateen, who invaded the club for three hours, shooting and taking hostages, and finally died in the apocalypse he had orchestrated.

We stand in solidarity and mourning with the 49 people who were murdered, the 53 wounded, and their families and communities. The dead, men and

Demonstration in London in solidarity with those murdered and attacked at a gay nightclub in Orlando, Florida. Picture thanks to: twitter.com/WayneDavid81

women, LGBTQI and straight, ranging in age from 18 to 50, but mostly young people, leave a sense of pain and loss that can never be healed. This inhuman, genocidal massacre is a reminder as to why the struggle for LGBTQI freedom must continue unabated. The point was underscored later in the day when a heavily armed man from Indiana was taken into custody at the Los Angeles Pride Parade.

From its beginnings, the struggle of LGBTQI people has added immeasurably to our understanding of the most basic questions, “What does it mean to be human?” and “What does freedom mean?” As Black Lives Matter has reminded us, often through the voices of Black Queers, our ground must never be less than the assertion of the absolute value of human freedom and dignity. Only this can open the door to revolution in permanence and a truly new human society.

The Orlando killer, Omar Mateen, seems to have been a case study: he was a narcissist, a wife-beater, a make-believe cop, and a social loser–reminiscent of another infamous Florida killer, George Zimmerman, the murderer of Trayvon Martin. His ex-wife told how he beat and terrorized her during their brief marriage.

Mateen was surrounded by toxic social relations. His father, a would-be Afghan politician based in the U.S., like a living fossil from the Reagan and Bush administrations, embodies the worst of U.S.-Afghan relations. In advocating that Pakistan’s Northwest Frontier Province should be ceded to Afghanistan, he doesn’t hesitate to ally with the Taliban: “To Pakistan death, death, death!” Omar Mateen surely learned something from his father. No wonder he wanted to gesture toward ISIS and the Boston Marathon bombers before he died.

Mateen worked as a G4S guard in Florida’s privatized juvenile prison system. Facilities run by G4S, a multinational security company, have seen numerous examples of physical and sexual violence directed at young prisoners by company personnel. There are few schools of dehumanization more efficient than the U.S. prison system.

Even before all facts were known, Donald Trump was treating the massacre as his racist, anti-immigrant, anti-Muslim, anti-women campaign’s Reichstag Fire—the event Hitler used to consolidate his power. As his past scandals and idiocies continue to haunt him, Trump’s campaign will come to rely more and more on fomenting hatred of “the Other” in his white target audience. As always, reaction feeds upon reaction, and an Omar Mateen is Trump’s best campaign asset. By the same token, it seems certain that Mateen was influenced by the atmosphere of Trump’s (and the Right’s) hateful rhetoric.

This hatred has only become more virulent in the face of some recent victories like the Supreme Court striking down bans on same-sex marriage. “Bathroom bills” directed against Transgender people, as in North Carolina; the bombing of a Target store’s bathroom in Evanston, Illinois, over that issue; a Gay couple in Atlanta assaulted with boiling water; a young Gay man in Los Angeles murdered by his homophobic father, all testify to the reactionary rise of anti-LGBTQI hatred that can become a “license to kill” for the most inveterate haters.

Were any of these influences on Omar Mateen’s murderous rampage obscure or untypical of today’s society? 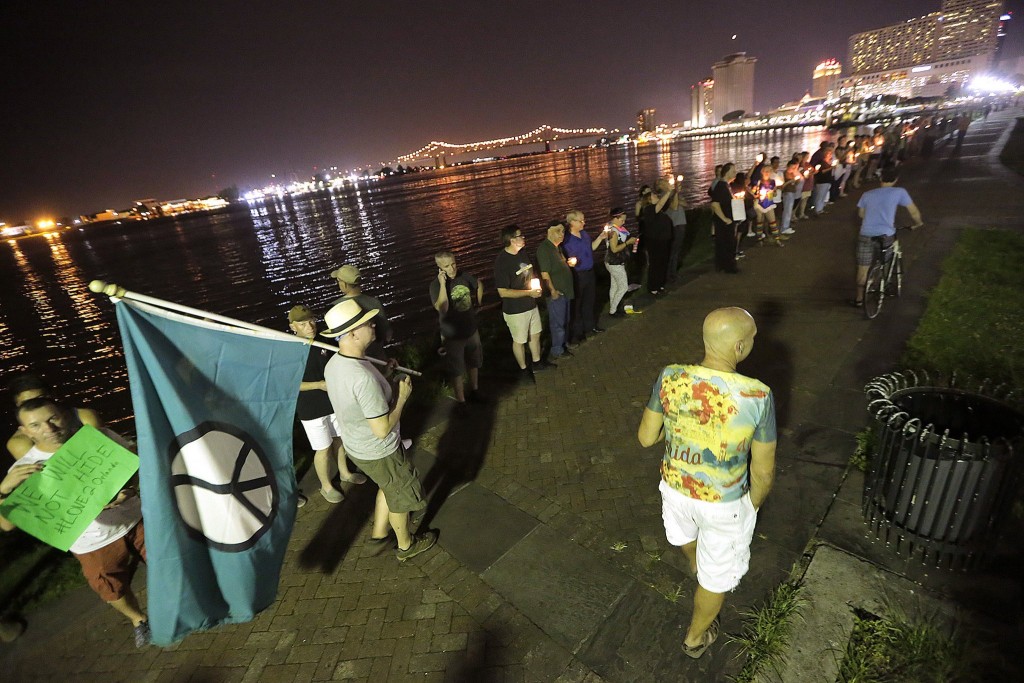 Hundreds of New Orleanians form a human chain along the Mississippi River during a candlelight vigil for those killed and murdered in Orlando, Florida. Picture thanks to: twitter.com/MichaelDeMocker

The massacre in Orlando will have repercussions in domestic politics and across the world. Mateen’s negation of human solidarity will be used by other reactionary nihilists, or merely “pragmatic” rulers like our current President, to excuse, ignore, or “justify” the current bombing campaign in Syria. The Assad regime and Russia’s Putin are attacking hospitals, schools, markets, and civil defense facilities in liberated areas. Hundreds are dying while the world is largely silent.

This crime will also be used to bolster Europe’s rising anti-immigrant Right. It will be the task of revolutionaries to defeat these reactionary moves.

That requires developing, practically and philosophically, the uncompromising assertion of human freedom and dignity common to the Black Lives Matter movement, the Arab Spring and the Syrian Revolution, which has long struggled against ISIS and its related ideologies. It means the uncompromising defense of, and solidarity with, the LGBTQI community, which is the common target of reactionary attacks across the world, from Trump’s America to Putin’s Russia to ISIS’s “caliphate.”

The creation of a new society remains the human endeavor. The totality of the crisis demands, and will create, a total solution. It can be nothing short of a New Humanism.

–Gerry Emmett for the National Editorial Board of News and Letters Committees, June 14, 2016

← Deadline for July-August 2016 News & Letters
Britain’s hate-driven referendum a victory for the Far Right →
This work is licensed under a Creative Commons Attribution-ShareAlike 4.0 International License