East Chicago, Ind.—On Feb. 4, the bitterest day of 2017, a hundred people from Northwest Indiana gathered to rage against Trump’s Muslim ban. They protested the exclusion of thousands of people at international airports—including those with visas and green cards and even passports. As well, Trump won’t stop boasting of building a “great, great wall” on the border with Mexico. 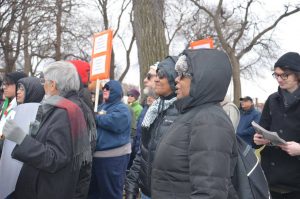 Our outrage was equally directed against his escalating campaign to evict from the U.S. millions of immigrants from the Middle East and Latin America in particular. Steelworkers, Teamsters, railroad workers and other labor activists joined people from communities on Trump’s hit list—Syrians, Iranians and Mexicans—to demand “No Ban! No Wall!”

The signs people in the crowd raised included: “Where there is oppression there will be resistance”; “Resistance—Some Assembly Required” and “You are on Stolen Native American and Mexican Land.”

As one young Mexican woman reminded us as she recounted her family’s own journeys to the U.S.: “The history of humanity is the history of immigrants.”

Other speakers included activists from Black Lives Matter and Free Syria. The Free Syria speaker represented people with no refuge from Bashar al-Assad and Vladimir Putin’s massacres, just as the doors of refuge in the U.S. and Europe are slamming in their faces. One Iranian woman described her mother’s exclusion, and carried her picture on a sign reading: “My 75-year-old mother is not a terrorist.”

Since this rally, and while Trump’s Muslim ban has supposedly been withdrawn in the face of judicial rejection, it looks like Trump’s ban continues in practice at the border.

Immigration officials without even fake legal authority are still currying favor with their boss by stopping people entering—people as prominent as Muhammad Ali’s son and a prominent French scholar of the Holocaust. Cleaning up after Trump will take awhile, no matter how rapidly resistance grows to his regime.