Below is a preview of a portion of the lead article for the upcoming March-April 2015 issue of News & Letters.  Comment now so that your thoughts can be taken into account in the finished article, which, for International Women’s Day/Women’s History Month, will take up women’s oppression and freedom struggles worldwide.

Just as in late 2012 when the brutal rape and murder of 23-year-old medical student Jyoti Singh Pandey galvanized women throughout India (see “Rape protests in India,” Jan.-Feb. 2013 News & Letters, p. 2), so now another savage sexual assault and murder—this time in Turkey—brought forth thousands of demonstrators, mostly women, throughout the country and beyond.

Like Jyoti Singh Pandey, Özgecan Aslan was a young student, only 19, and like Pandey she was sexually assaulted and murdered on a bus she was taking home. On Feb. 11, when the driver tried to rape her she fought back and then he stabbed her and beat her to death with an iron bar. In an effort to hide the murder, the driver, Ahmet Suphi Altindöke, with his father and a friend, took Aslan’s body, burned it, defaced it by cutting off her hands and dumped her in a river so that when she was found she was only recognizable by the clothes she had been wearing.

Women and men gather in Taksim Square in Istanbul, Turkey, Feb. 14, 2015, to protest the murder of Özgecan Aslan. Photo by Selim Girit.

Turkey erupted in demonstrations starting at Özgecan Aslan’s funeral, where over 5,000 came and women refused the orders of the Imam there to step back during the ceremony. Instead women stepped forward to the front lines and then did something unprecedented: they stepped forward again to carry her coffin.

Since then the demonstrations have deepened and spread. Again, as in India, the government’s first response was to attack the protestors. On Feb. 14 women protested in Istanbul and marched to Taksim Square, where they condemned the government for ignoring the issue of violence against women and for not officially condemning Aslan’s attempted rape and murder; 50 women trying to hang banners in the Square were arrested. Thousands more protested in the Kadıköy district. In Ankara, protests had to contend with police attacks as they occupied a park. Over 3,000 demonstrated in Mersin and at the demonstration of thousands in İzmir the women banned men from their protest. Protests broke out in at least ten other Turkish cities and continued in Istanbul and other cities in the days that followed. The youth too made their actions felt as 1,500 students marched in Gaziantep and high school students throughout the country are wearing black in solidarity with Aslan. Demonstrations of people wearing black continue with many chanting, “You will never walk alone.”

Demonstrations crossed national borders as Turks took their protests to Trafalgar Square in London and by Feb 17 protests not only continued in Turkey but were also in at least three places in Cyprus; 200 demonstrated in Frankfurt, Germany, as well as in Hamburg and Berlin.

Ever the clumsy, slobbering, lying opportunist who is the leader of a misogynistic war against Turkish women, president Tayyip Erdogan realized by Feb. 16—fully five days after Aslan was murdered—that he better speak out. He vowed he would “personally follow the case so that they will be given the heaviest penalty. I am already following the case. Violence against women is the bleeding wound of our country.” 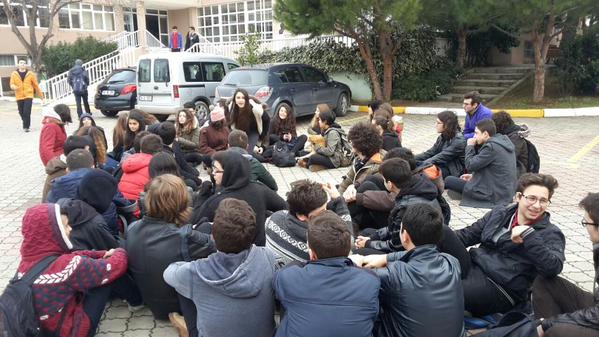 While that is true—for just one example: from 2003 to 2010 there has been a 1,400% increase in the number of murdered women and when Erdogan’s so-called “Justice and Development Party” (AKP) came under criticism for those facts, they tried to alter the figures—Erdogan’s policies are their own kind of violence aimed at depriving women of hard fought for freedoms. Erdogan opposes equality between women and men as going “against the laws of nature”; he has proposed limits on abortion and made that procedure extremely difficult for poor women by ending abortions in state hospitals and he aims to ban all abortions after four weeks of pregnancy; his government has enacted legislation making divorce more difficult; his deputy prime minister—revealing Taliban-like thinking—suggested that women shouldn’t laugh in public; his Prime Minister urges youth to marry before graduating from college; his Health Minister strongly suggests that “women should not focus on any career other than the career of motherhood.” These “suggestions” are backed up by incentives, like a $4,000 subsidy to couples that marry early and university students who are married don’t have to repay some of their student loans. Without publicity—and evidently without discussion—he has destroyed three state agencies created to help women only after years of struggle; and the list goes on.

With violence against women so out of control in Turkey, the sexual assault and murder of Özgecan Aslan was no isolated event. But what is new—and what reveals the dialectic of freedom—is the reaction to it. As in India, it may not immediately end rape and murder, but the nationwide outrage and protests reveal a determination to change such a deadly and oppressive reality.