#SavethePostOffice rally on Aug. 22, 2020, in front of the Old Post Office (now the Trump Hotel). Part of the nationwide protests organized by Walter Shaub, former director of the U.S. Office of Government Ethics. Photo: Victoria Pickering.

Chicago—Postal workers were at the front line of resistance to Trump’s rigging of the November 3 election. It was postal workers who brought to light the dismantling of high-speed sorting machines that Louis DeJoy ordered shortly after Trump had had him installed in June.

It was postal workers who sabotaged efforts to continue to clear out more machines after courts demanded DeJoy halt the removals. In many places they had been able to slow walk their orders to permanently reduce other machines to scrap metal, despite DeJoy’s claims in court that he could not restore the sorting machines because they had been destroyed.

Still, even defiant postal workers could not completely undo the intentional slowdown of delivery to the polling places. The tip of the iceberg of undelivered ballots was the 300,000 that postal workers identified that Judge Emmet Sullivan on Election Day ordered to be inventoried and delivered. DeJoy defied that order. It was fortunate that, because of the attention that postal workers had drawn to USPS obstruction, millions of voters with mail-in ballots delivered them in person to drop boxes instead, but we will never know if Trump’s use of the USPS for voter suppression led to re-election for Sen. Joni Ernst in Iowa, where Des Moines postal workers had first raised the alarm about removal of sorting machines, or for Thom Tillis in North Carolina. If so, the scheme likely kept Mitch McConnell in control of the Senate. 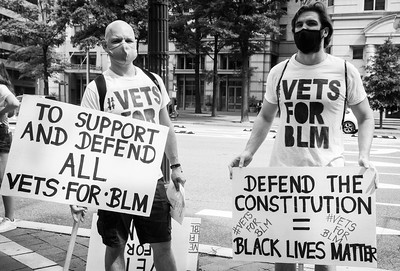 Now workers’ fight is for their own jobs. They face the bankruptcy by design of the USPS, leading to its breakup and piecemeal privatization to entities thirsting for the cash cow that is its pension fund. Congressional Republicans in 2006 required the pre-payment of pension obligations 75 years ahead of time. Eliminating postal workers and privatizing USPS would make all that funding available to Wall Street.

It is not as simple as relying on a Biden Administration to undo Trump’s appointment. Trump appointed a majority of the USPS Board of Governors, which in face of an avalanche of public condemnation of DeJoy’s blatant attacks refused to remove him. Short of bringing DeJoy to justice for lawbreaking, postal workers will have little relief in opposing the plans of this holdover of the Trump regime.

← Voices from the Inside Out: Damage left by Trump
LA voters dump killer cop protector Jackie Lacey →
This work is licensed under a Creative Commons Attribution-ShareAlike 4.0 International License