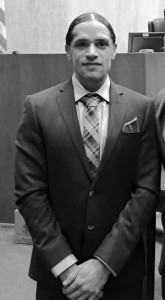 Jesse Perez after proving prison guards had retaliated against him, destroyed all his property, and lied to keep him in punitive disciplinary status.

San Francisco—A most remarkable trial started on Nov. 16, 2015. A federal judge found that a prisoner’s story was believable enough that a jury should hear it.

Jesse Perez, 35, has been imprisoned since age 15. In 2003 he was “validated” as a gang member and sent to solitary confinement at the notorious Pelican Bay Security Housing Unit (SHU). He challenged the baseless validation in court in 2005. He participated in all three of the historic hunger strikes in 2011 and 2013.

Seeing the mood in the country change because of the hunger strikes, in 2013 the California Department of Corrections and Rehabilitation (CDCr) settled his case by agreeing to re-examine his status.

Guards at the prison, not happy with the outcome of the legal case, raided his cell, sought to humiliate him and his roommate, destroyed all his property, and promised he would stay in solitary forever. To make good on that promise, they filed a made-up rules violation report (RVR).

That a judge found a prisoner’s claim of retaliation by guards compelling enough to be heard is rare. All a prison’s lawyers have to say is that a convicted criminal is complaining about his treatment by law-abiding guards. In this case, the lawyer argued that the guards did nothing wrong and followed standard procedures. In the vast majority of cases, the judge agrees with the prison and the complaint is dismissed.

The lawyers for Mr. Perez presented his case: convicted as a youth, he used his time in prison to improve himself, becoming a jailhouse lawyer and helping others file their appeals. Helping other prisoners was undoubtedly what earned him the validation as “dangerous.”

By filing this lawsuit, Mr. Perez writes he was seeking “to shine a public light at trial and rein in what prisoner activists often endure in exercising their constitutional rights: the retaliatory abuse of the department’s disciplinary process by prison guards.… As prisoner activists seeking to make positive contributions to the interest and human dignity of prisoners, we understand that the trappings of power enjoyed by guards represent the biggest obstacle to significant and lasting progress.”

Mr. Perez testified to his reasons for filing the lawsuit. To his attorney’s question, “So are we here today because one day your cell wasn’t as neat as it was the day before?” he replied:

“Not at all.… Our system of law requires prisoners like me and many others to surrender our freedom, but our laws do not require us, and we refuse to surrender our human dignity or the minimal constitutional rights that we retain even after crossing the prison gates.

“So for me, we’re here because prison officials decided to punish me for exercising my constitutional right to file a lawsuit against their colleague. They threatened Rudy [his cellmate] and me. They unnecessarily confiscated important legal documents that I had. They trashed my cell. And then they wrote a false disciplinary report in order to keep me in solitary confinement.

“This is not just about a messy cell or some sort of inconvenience in having to defend against a trumped up RVR. This cell was my whole world for the multiple years that I was in there. It’s the only space where I was able to experience the little bit of life that exists in solitary. They didn’t just take my stuff. They took the only possessions that I had. It’s all I had. So to me it was a huge deal.

“I think the officers’ actions also represent the sort of backlash that prisoners often have to hazard when speaking out or exercising their constitutional rights. So to me, we’re also here so that we can both inform and empower the public to deal with this continued corrupt course of conduct. Because, in our reality, the CDCr seems incapable or unwilling to do so. So that’s why we’re here.”

Just getting the case heard in open court was a major victory. The prison enjoys an almost complete immunity from prosecution, no matter what illegal and inhuman conduct they inflict on prisoners. That any of it could be presented in public proceedings is remarkable and a hope for change. That the jury unanimously found that Perez’ constitutional rights were violated and awarded him $25,000 in damages is the icing on this story. It suggests that the public may be ready to address the inhumanity perpetrated in U.S. prisons.

← Queer Notes, January-February 2016
‘Wellness check’ is Orwellian for torture →
This work is licensed under a Creative Commons Attribution-ShareAlike 4.0 International License