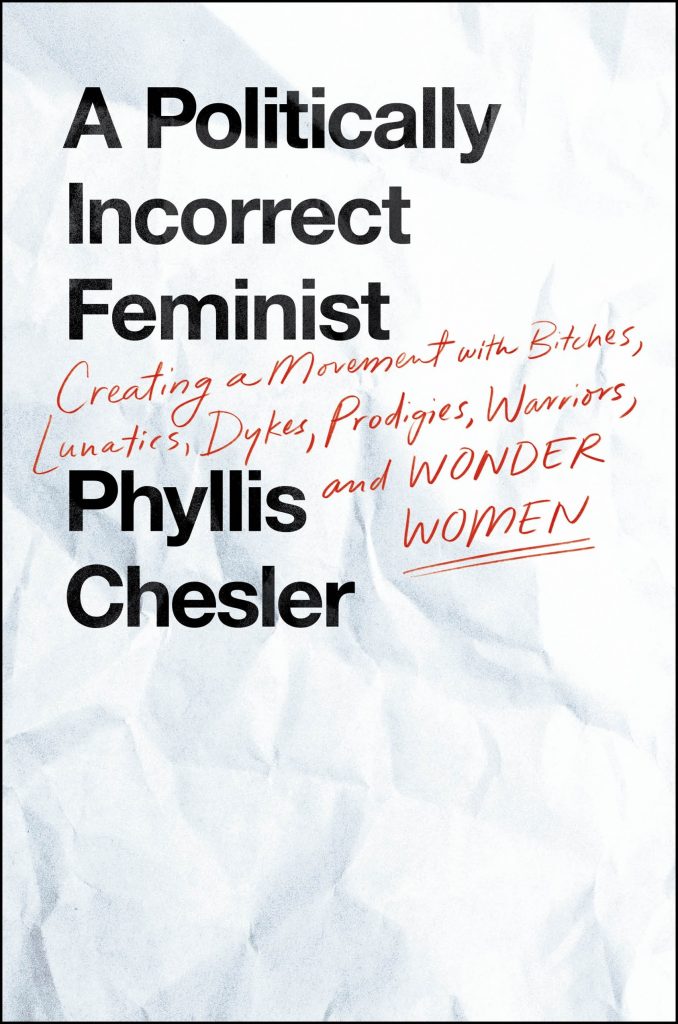 A Politically Incorrect Feminist: Creating a Movement with Bitches, Lunatics, Dykes, Prodigies, Warriors, and Wonder Women (St. Martin’s Press, Aug. 28, 2018), is the 18th book by Phyllis Chesler, a radical feminist activist since the 1960s and long-time practicing psychotherapist and professor of psychology and women’s studies. Her first book, Women and Madness, exposed the frequent sexual abuse of women by therapists and abusive institutionalization of women by husbands and family members. She continued revolutionizing the mental health industry and the legal system with books on child custody and surrogacy. This only touches on her many accomplishments summarized in this memoir.

ONE HISTORY OF WOMEN’S LIBERATION

The book is also about the many feminist activists she has known. Chesler fears their influence on history will be forgotten while their books go out of print. She introduces the reader to groundbreaking books that provide an understanding of feminist issues and history. She describes her friendships with their fascinating, eccentric authors with delightful and sometimes disturbing anecdotes.

Chesler is also concerned that we learn to discuss and debate different opinions on important issues instead of stalling the movement with politically correct apathy. At the same time, we need to know when to put aside differences of opinion or personality for solidarity in a struggle. We need to face the problems of verbal aggression and of taking personal offense over different opinions. Both have caused women to leave the movement.

Feminists are amazed by the creativity, culture, and sisterhood of the movement but disillusioned by its sometimes petty, vicious infighting and betrayals. Chesler says we can take comfort from the first wave of the feminist movement having the same problems, of which Susan B. Anthony said, “I see nothing but the beginning of a petty espionage, a revival of the Spanish Inquisition.”

Part of the issue is the shattering of our expectations of women to be “more compassionate and less aggressive than men.” Like men, women are “as close to the apes as to the angels.” Chesler uses her knowledge of psychology and five months of captivity as a bride in Afghanistan to explain how patriarchy has trained women to keep each other down. Furthermore, traumas such as incest and controlling, abusive relationships can cause psychological breakdowns.

We can also take comfort from the fact that men grapple with similar problems in organizations and movements. Chesler tells how writers with new books face intense envy from their peers. This happens in both male-dominated academia and the feminist movement.

Furthermore, men of genius and male artists are almost expected to have mental health issues and substance addictions. These are sometimes even celebrated as a gift of divine madness or a connection to a greater reality. Their ideas and creations stand on their own in spite of their creators’ sometimes difficult personalities. Women with these issues are often labeled as mindless incompetents.

Women tend to fear that any sort of bad behavior by a feminist will discredit the movement. Looking at this bigger picture of world cultures, feminist history, and human psychology and behavior can help us cope with our fears by putting them into context.

Today’s activists still must fight similar patriarchal oppressions as our earlier counterparts. Similar disagreements continue over similar issues within the movement. The excitement of discovering feminist ideas and the disappointment of personal clashes continue to be played out online. Feminists are already discussing the insights of this memoir, which will be of great help in going forward.