Miriam Frank’s Out in the Union, is an important history of a neglected subject: the relationship between LGBT people and labor unions. She interviews LGBT people involved and explains how labor unions operate as she describes their internal conflicts and fights with management. She shows how unions became vital to securing Queer rights and how LGBT workers and issues are important to the future of union organizing. 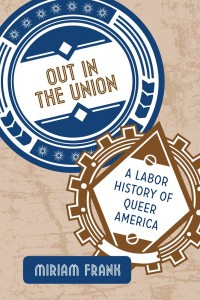 Interviewees describe how, in most workplaces before the Stonewall Rebellion, they could be harassed and threatened. Union leaders could be jeopardized if union political rivals outed them. But then unions began to hire people from the civil rights and feminist movements and to support non-discrimination provisions. Slowly, they became more open to promoting LGBT rights, including non-discrimination clauses and domestic partner benefits, which in turn caused more LGBT people to become interested in unions. There have been LGBT unions as well as LGBT caucuses within unions.

As the LGBT communities became more political, activist groups began to work in coalitions with unions against common enemies. Here Frank shows how the religious Right targets all marginalized groups and can be defeated by these groups unifying. The Coors beer company has been notoriously racist and oppressive to workers and unions. As Coors financially supported religious Right anti-Queer causes and discriminated against LGBT workers, the LGBT community enthusiastically cooperated in labor’s Coors boycott. In the 1970s and 1980s, the religious Right fought to replace anti-discrimination laws with anti-LGBT laws, especially attacking Queer teachers and students. Unions sometimes understood this as a threat to the democratic process, since it affected their ability to protect their workers, and they gave Queer activists their support.

Frank also discusses the difficulties of unionizing LGBT-owned businesses. Queer restaurant and store-owners have exploited young staff members who view themselves as struggling creative types and didn’t consider the struggle for fair treatment worth the trouble at jobs they expected to be temporary. When other owners attempted to run their businesses along Leftist utopian models, either they or their workers didn’t realize they would experience the same problems as any other business.

Frank describes several difficulties that arose for the workers at the Gay Community Services Center in Los Angeles and the lesbian feminist owned and operated Labrys Auto Repair in San Francisco that might have been solved if the workers had made attempts to unionize sooner. In the 1980s and 1990s, when activists created medical clinics and caregiving services for people affected by HIV/AIDS, their zeal was often deliberately exploited. Bosses used union-busting strategies while also spreading the propaganda that unions were anti-Gay interlopers.

Frank shows how much of the progress for LGBT rights has come from unions, both by securing rights in the workplace and through use of unions’ resources to change legislation. She explains how outreach to LGBT workers can help unions survive and expand. This book will also be important in helping activists understand the necessity of working with and within unions and will allow them to learn from its record of mistakes and successes.