From the May-June 2019 issue of News and Letters 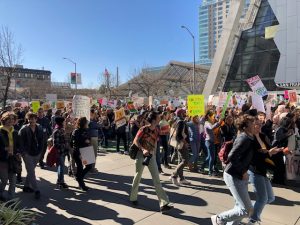 San Francisco—On Friday, March 15, a friend of Bay Area News and Letters Committees reported a “cheerful and exuberant rebellion today in the rare San Francisco sunshine. There were grade school kids and high school kids and youth leaders and reporters and photographers.

“What a turnout! Probably above 1,000 strong. The youth did it all. So many delightful and creative signs. The standard chants and some new ones: ‘Climate change is not a lie, We won’t let the planet die.’

“At some point they chanted ‘AOC, AOC, AOC.’” They were acknowledging Rep. Alexandria Ocasio-Cortez, the Congresswoman that Fox News likes to demonize. One young participant said that he, his friends and many of his generation have lost all hope for a future.

The youth-led march was part of an international day of protest across the U.S. and over 100 countries, inspired by 16-year-old Greta Thunberg of Sweden, who, over six months ago when she was 15, began a regular Friday school strike, demanding action against the growing environmental catastrophe.

Thunberg, who educated herself over several years, questions the whole system that brought about what she calls a total “existential crisis.” When in her talks she brooks no compromise with those who draw hope from the last three decades of failed efforts to deal with it, the “adults in the room” can only silently nod in agreement.

Thunberg is a remarkable individual, but is not unique in seeing the totality of the ecological crisis facing humanity. Mass marches, and volumes of studies, have raised the specter of a complete ecological crisis and the need to totally change the system.

YOUTH IN THE LEAD

What is different about the global Youth Climate Strike, which Thunberg’s sharp uncompromising focus helped bring to the fore in the global movement against climate change, is a unique youth subjectivity—a generational perspective on the total threat to their future and every future generation of humans.

This humanism emerges, as Jean-Paul Sartre put it, when the age makes us “touch our limits,” making us all “metaphysical writers.”