Sacramento, Calif.—On Aug. 6 a new chapter in activism around Life Without a Possibility of Parole (LWOP) in California was opened with a rally at the capitol steps.

In the Summer of 2014 A Living Chance project was launched, giving California’s women prisoners an opportunity to tell their story, to share what life means to those sentenced to “the other death penalty,” LWOP (see www.alivingchance.com).

Then, in early 2017, Gov. Jerry Brown granted nine commutations, five of them for LWOP prisoners, making them eligible for a parole hearing. Since then more commutations followed, spurring people at the Central California Women’s Facility and at California Institution for Women (CIW) to redouble their efforts. California Coalition for Women Prisoners is also a part of this new chapter in a Drop LWOP campaign, reaching out to those inside to help them be their own best advocates.

The organizing inside by LWOP prisoners, to help each other and to express their human aspirations for freedom, inspired organizers outside. A number of prisoners’ rights organizations and LWOP prisoners’ family members got together on Aug. 6 to express the growing sentiment that it is time to end the cruel practice of LWOP.

We held posters with pictures of about 30 LWOP prisoners. Many formerly incarcerated people and family members spoke to the crowd and during their visits with legislators. Others sent messages from inside. Here are just a few of their statements: 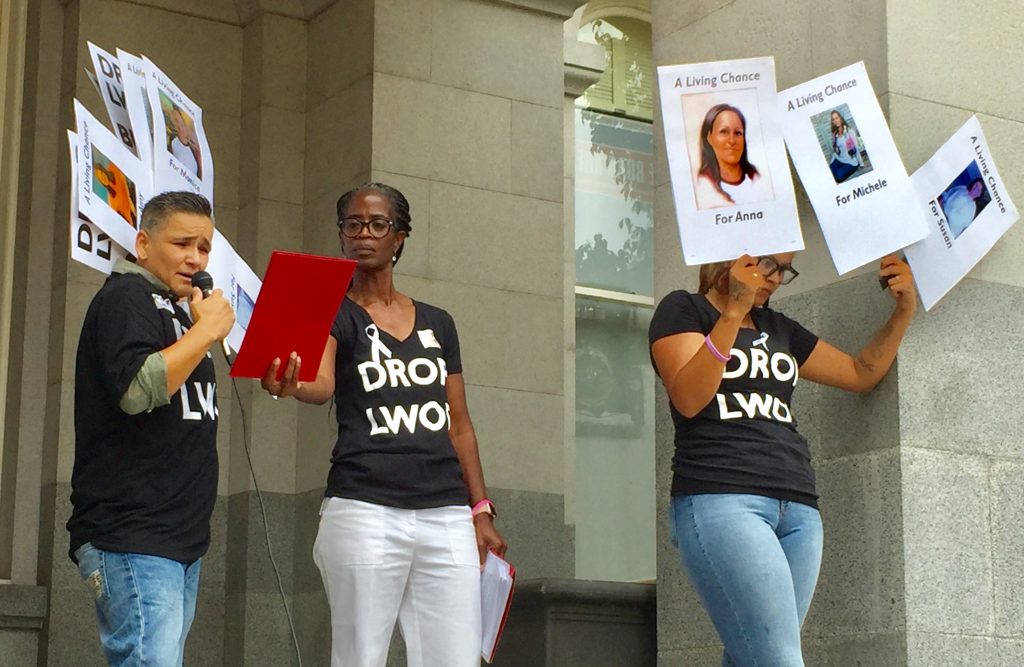 Being Poor with LWOP, by Ruby P. (CIW), referring to the recent Supreme Court decision that youth sentenced to life in prison should have a right to have a new hearing regarding their sentencing:

“I am speaking to how I personally feel about the disparity in justice for the rich and the poor. I have been all alone in my fight for freedom some 30 or so years….

“I understand that I made a horrific choice in December of 1985 and that that choice has defined me for all these years in the public’s mind. But I watch the news and see all these people who have money or their families have money and the public sees them in such a different light.…Do we who have no money ever receive a second chance? Do we who received a Life Without Parole sentence yet were under the age of 25 when it was committed not warrant the same consideration as all those who were under 25 and only received life sentences?

“When does injustice take the time to look at each and every one of us and decide that 25, 30, 35 years of incarceration is enough to justify a second chance, no matter if it’s a life or life without sentence?”

Jane D. (a lifer, CIW): “An LWOP sentence is not an alternative to the death penalty, it is a slower, more devastating death penalty. An LWOP sentence presumes at the time of sentencing, even if the person is only 19 years old, that there is no possibility of rehabilitation.”

“The U.S. is one of a handful of countries that still uses LWOP sentences and the population of people serving LWOP sentences has tripled in the past two decades. This country is out of step with the rest of the world and out of touch with human dignity.

“As Viktor Frankl, Auschwitz survivor and psychotherapist,  said, ‘If we treat people as if they were what they ought to be, we help them become what they are capable of becoming.’”

← Behind ‘that door’
Review: ‘Labor Notes’ on fighting ‘open shops’ →
This work is licensed under a Creative Commons Attribution-ShareAlike 4.0 International License