Oakland, Calif.—Firestorm, a project of California Coalition for Women Prisoners that connects with prisoners’ struggles around the world, held a forum on Oct. 6 with Brazilian Black women activists.

Sara Branco, a Black feminist, spoke of Brazil’s racist history, saying: Brazil was the last country in the Western world to abolish slavery. By 1888 about four million slaves had been imported from Africa, 40% of the total number of slaves brought to the Americas.

BRAZIL AND THE U.S.: FOUNDED ON RACISM

Brazil encouraged white immigrants. Portuguese, Italian, Spanish, German. Blacks were homeless and starving, but there was money for the white immigrants. Brazil was known as an open country, a country for immigrants, though it was built mostly by slave labor.

Being Black has only negative connotations: poor, uneducated, unemployed and violent. People have a hard time saying, I’m a Black person. Even now only 54% of the population admit to being Black, but actually it is much more.

It’s possible to discuss class in Brazil, but not race. There is an acknowledgement that people lack opportunities, but it’s claimed it is because they are poor. But poverty has a color in Brazil. Poor people are Black.

Things started changing when the Workers’ Party came to power in 2003. Reparations included class-based affirmative action, which helped Blacks, though did not acknowledge race.

‘ONE OF THE BEST LAWS IN THE WORLD’ 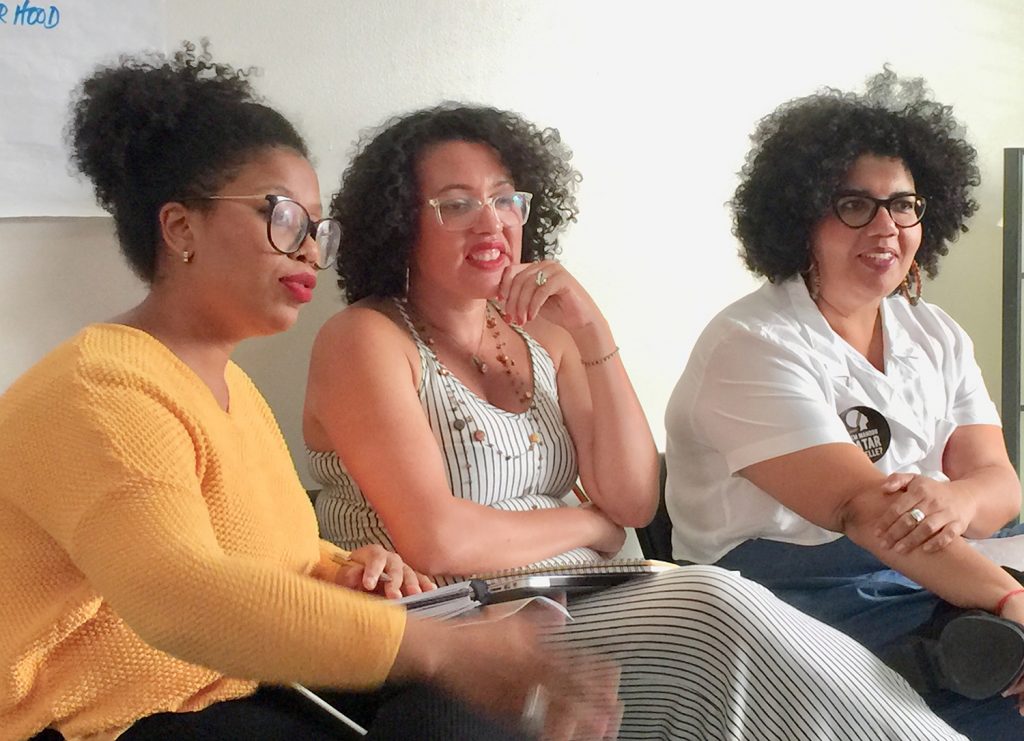 A new law punished domestic violence, one of the best laws in the world. Still, Black women die 54% more than white women. No one talks about violence against us. Every 23 minutes a young boy is killed. To face violence, we do not need to invest more money in security but in education, healthcare and things like that.

Isadora Salomao, an Afro-Brazilian activist for human rights: I am an activist in political parties in Brazil for 20 years, first in the Workers’ Party, then the Socialism and Liberty Party. My perspective is social and intersectional on president Jair Bolsonaro’s impact on people’s lives, specifically Black women’s lives.

An example of how Bolsonaro’s policies affect us is the March 20, 2018, assassination of popular Rio city councilor Marielle Franco [a Black Lesbian elected in 2016, known for her work in favelas]. There was not even an investigation into her murder [the prime suspect being a policeman photographed with Bolsonaro].

There has not been any investment in social welfare for 20 years. Lives of Black women are worse than ever. The Black population has never heard of retirement benefits. Most have jobs without benefits. The administration defends “minimum state” when it comes to rights and “maximum state” when it comes to control. They are giving away our heritage, such as the Amazon.

A majority of the working class, mostly Blacks and women, are endangered. We need to organize to overcome capitalism and talk about a system that would look at these issues in a more profound way.

Nana Oliveira, a lawyer and Black feminist activist, coordinates the project “Release My Mom,” aimed to free jailed women: I am part of a popular advocacy group named Maria Felipa. We fight for women’s freedom. We hold events to bring women’s incarceration to the attention of the population. “Release My Mom,” is meant to provoke people to realize that when they incarcerate mothers, that affects children. Brazil has over 40,000 women prisoners.

In 2007 we worked in a prison for women. The majority did not have a lawyer. The court-appointed lawyer told them, “You’ll be with your family in 15 days.” It was a lie. Many women don’t even know if they were convicted of anything.

Public defenders are few, and in some cities there are none. They will not even see you for at least six months. Judges are not elected, they pass a test. Only rich white people have the means to study for the test.

Women who are convicted are sentenced for more years than men for the same crime, even in the same case! There are many inequalities: 62% of incarcerated women are Black; 45% have not been convicted; 50% are under 29 years old; 50% didn’t finish high school; 72% are single; 74% have kids; 70% have been committed for more than four years.

A lot of women don’t know who their children are with, and the police don’t care about them when they arrest the woman. There are no child protective services. Women prisoners are not able to find out the fate of their children for three years or more!

A cell designed for 8 houses up to 29 prisoners. You have only one set of clothes. Money raised for women prisoners does not reach them. They don’t even have pads. They use bread as sanitary pads. A supreme court decision said that women with children should not wait for their sentencing in jail. But that decision is not respected. It shows a lack of democracy.

If the laws were respected, 40% of prisoners would be free. Only 10% are in prison for violent crimes. Our problem is racism. When a white person goes before the judge, 40% of the time they go free. A Black person will not.

The U.S. incarcerates Black people too, which makes a discussion between South and North America important.

Several issues were discussed during the period following the presentations, including the Black Lives Matter movement in the U.S. The issues were brought home by two Bay Area Black Lives Matter mothers whose sons were killed by police. They spoke about their fight for justice, especially in outlying communities, which do not have an established structure of support.

← Voices from the inside out: Generations in jail
Detransitioners and Lesbians speak out →
This work is licensed under a Creative Commons Attribution-ShareAlike 4.0 International License